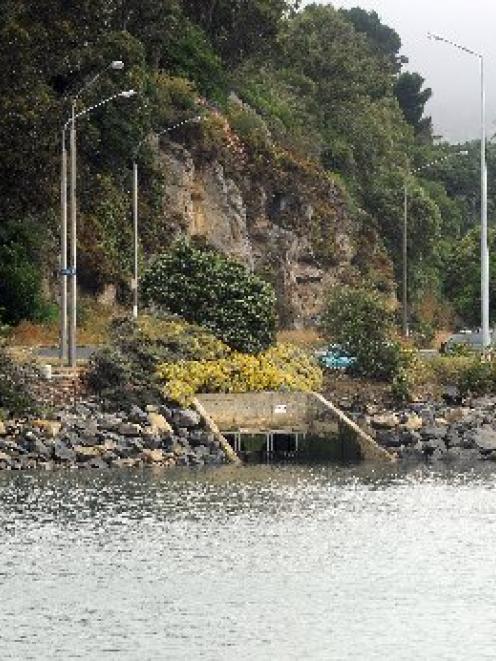 The outfall on Portobello Rd. Photo by Craig Baxter.
The Dunedin City Council will consider costly improvements to Dunedin's water infrastructure to address fears chemicals leaching from former industrial sites are contributing to the contamination of Otago Harbour.

Council sampling of the city's storm-water quality, harbour sediments, shellfish and other marine life over the past four years has found evidence of "major" historic contamination within the upper harbour, particularly near the Portobello Rd storm-water outfall.

There was also continuing contamination from storm-water discharges. Annual monitoring since 2007 has shown levels of arsenic, lead, zinc and PAH within South Dunedin storm water has, in many cases, breached international guidelines.

Some of the contamination was suspected to be coming from former industrial sites in South Dunedin, possibly after leaching into old, damaged storm-water pipes in the area.

The concerns were detailed in a integrated catchment management plan for South Dunedin's water network, one of 11 prepared by council consultants to help plan for the city's water infrastructure needs over the next 50 years.

The problem was not getting worse, and had in fact improved from 20 years ago, when waste water was discharged into the harbour, she said.

However, fixing the source of the contamination could be expensive, and more work was needed before potential solutions could be considered.

That could include spending "hundreds of thousands" of dollars adding new filtration equipment where storm-water outfalls entered the harbour, or other steps to address contamination at its source, but only after more work to trace those sources was completed, she said.

Contamination problems were also present in other parts of the city but not to the same extent, making South Dunedin a priority area, she said.

However, there remained gaps in the council's knowledge of exactly what was causing the contamination, and what impact it was having on the condition of the harbour and its marine life.

Those gaps would need to be addressed first, she said.

The South Dunedin report was prepared by council consultant AIRS New Zealand. It also detailed flooding problems that were expected in South Dunedin under a variety of weather scenarios and could need engineering solutions.

The area's water network included 65km of storm-water pipes discharging into the harbour from the same outfall near the Portobello Rd storm-water pump station, the report said.

The South Dunedin plan pointed to sediment samples from near the outfall showing signs of "historic contamination" dating back to South Dunedin's more industrial past.

That pointed to the continued existence of sources of contamination within the South Dunedin catchment entering the storm-water system and being carried to Otago Harbour.

The age of South Dunedin's storm-water network could also be contributing, with 12% of the area's pipes over their 100-year lifespan.

It was possible damaged pipes were allowing contaminants to mix with storm-water flows before being carried to the harbour, the report warned.

Biological monitoring since 2007 had also found fluctuating levels of heavy metals in cockles, mussels, fish and octopus collected near the Portobello outfall, although levels remained within acceptable food standards.

The monitoring was also not considered to have continued long enough to show clear trends about the health of the upper harbour ecology, and there was "no clear link" between the state of the harbour and the storm water entering it, the report said.

Sediment studies had found historic concentrations of contaminants that, in most cases, breached low- or high-level trigger points contained in Australian and New Zealand Environment and Conservation Council guidelines.

The sampling results showed the contamination was concentrated within 50m of the Portobello Rd outfall and near roads beside the harbour.

The chemicals detected were generally associated with roofing materials, industrial activities and heavy traffic, it said.

Zinc levels, in particular, were also high in South Dunedin compared with other parts of Dunedin, New Zealand and even Australia, the report said.

The report outlined a suite of recommended changes to improve storm-water quality and address flooding threats in South Dunedin, including better monitoring, setting targets to reduce sediment contamination and improving the network.

A report containing options would be presented to the council's infrastructure services committee in the next few months, chairman Cr Andrew Noone said when contacted.