Track may reopen next week 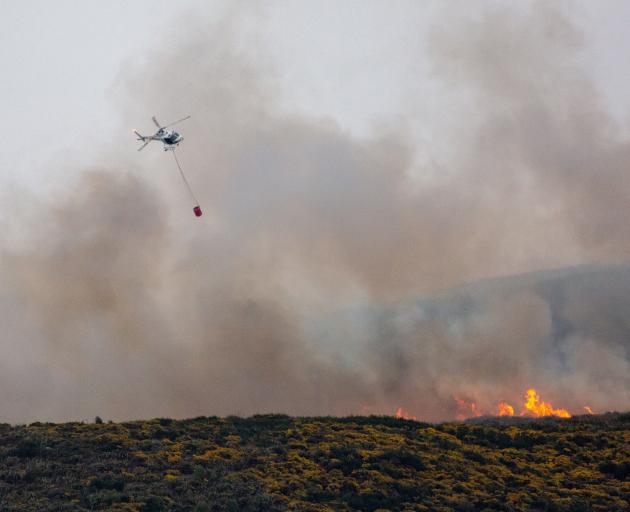 A helicopter battles a blaze on Flagstaff. Photo: Ruth Topless
The Pineapple Track may reopen next week, once the blaze that swept across hectares of vegetation is officially declared out.

Information supplied to the Otago Daily Times yesterday that the track had already reopened was incorrect.

A Dunedin City Council spokeswoman said some tracks in the Flagstaff area would remain closed until Fire Emergency New Zealand (Fenz) declared the fire officially out.

Otago Principal Rural Fire Officer Graeme Still said Fenz was waiting for a "few mls" of rain to definitively mark the end of the fire, and the amount required would hopefully fall next week.

Police have said they are calling on the public for information as they investigate the "suspicious" fire that swept across the Flagstaff area and is understood to have covered between 28ha and 30ha.

During the blaze, parts of Dunedin were wreathed in smoke as fire took over the ridgeline.

Firefighters, aided by eight helicopters, fought the flames due to poor road access to the site. While the fire was largely extinguished on Monday night, crews dealt with flareups on Tuesday and Wednesday. The fire was being treated as suspicious.

Police said they were helping Fenz with an investigation into the blaze, and were seeking help from the public.

Anyone who was in the area, or who may have seen anything suspicious, from noon to 1pm on Monday was asked to contact Dunedin police on 105 or Crimestoppers on 0800555111.