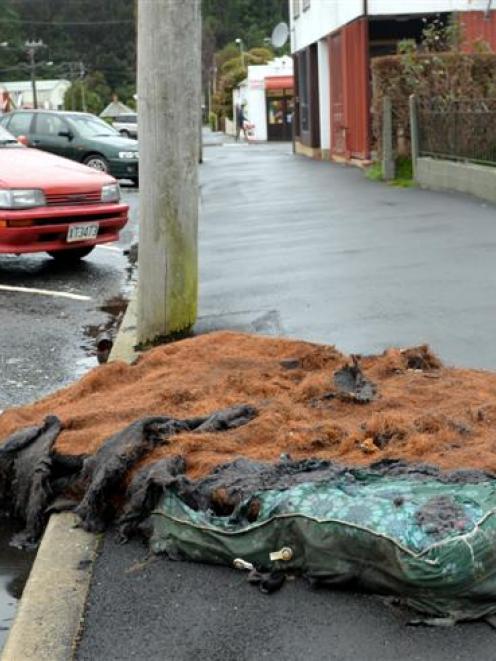 A burnt mattress lies in Howe St in Dunedin yesterday afternoon. Photo by Peter McIntosh.
Lives were put at risk from couch fires lit too close to houses in Dunedin's student quarter, Dunedin police and the Fire Service have warned.

One, at a brick house on the corner of Dundas and Castle Sts was set against a house, scorching it and cracking windows.

A bonfire at the back of a Howe St house attracted hundreds of party-goers, many looking down from nearby roofs.

''Kids are going to die down there. It's all fun and games while it's happening, but there's a tragedy waiting to happen down there,'' Senior Sergeant Matt Scoles told the Otago Daily Times.

''It scares me that these fires are taking place so close to what must be flipping tinder boxes down there. Once one goes, they'll have days down there putting it out, because they won't be able to stop it going from house to house,'' Snr Sgt Scoles said.

Police attended three parties with about 300 party-goers at each, in the Dundas St, Castle St and Howe St area.

Two people were arrested for disorderly behaviour at the Howe St bonfire.

''I think a lot of students are coming to Dunedin from out of town under the impression that they can't wait for Friday and Saturday night so they can start burning stuff.

''It's no fun having to tell parents, or have some of our colleagues in the North Island go and tell these kids' parents that Joe Student has been found dead in their bed.

''Sooner or later someone's going to be in one of these flats KO'd because of too much alcohol. Their flat is going to go up. We're not going to know they're in there until the fire investigators find them the next day,'' Snr Sgt Scoles said.

Exacerbating the situation was a large number of secondary school pupils, who were increasingly attending parties in the area.

He acknowledged that in general couch fires had been declining. The end of re-orientation and a warmer-than-usual temperature were both likely factors in the disorder, he said.

Willowbank station officer Mark Dyer said Saturday night was a ''bit of an aberration'' because couch fires had been less frequent.

The fires were lit between about 9.30pm and 1.30am. The central city station was called to assist Willowbank with the Howe St bonfire.

His main concern was the proximity of two fires to houses. He had only seen a couple of other couch fires lit so close to dwellings in his career.

The Howe St bonfire, in a courtyard at a ''huge party'' with ''hundreds of kids'', started as a couch fire.

''There was a potential there for kids to be hurt. There were kids sitting on roofs all over the place. They're going to harm themselves, that's the trouble.''

Apart from a ''few idiots'', the hundreds of party-goers were largely well behaved, he said.

A bottle and a couple of cans were thrown at firefighters, who were not hurt. It was fortunate the fire on the Dundas St and Castle St corner was set against a brick house.

An Otago University Students' Association spokesman said the disorder was disappointing. OUSA had been working with emergency services to reduce couch fires, and would continue to do so.

''We want students to have a great time but it shouldn't come at the risk of anyone's lives or houses.''