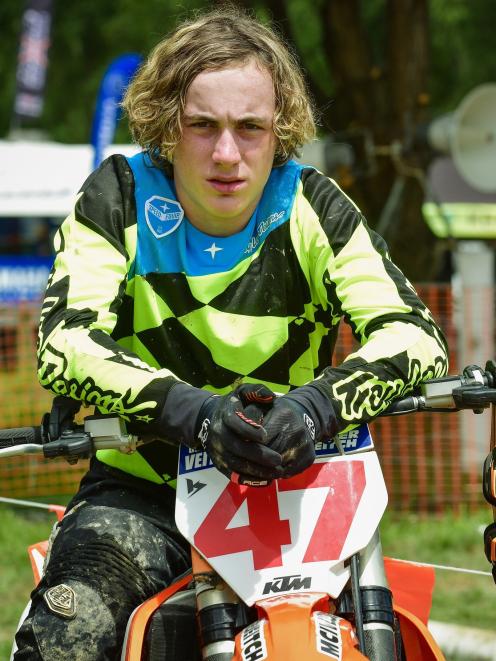 Grason Veitch. PHOTO: ANDY MCGECHAN/BIKESPORTNZ.COM
A teen who died in a crash in Dunedin at the weekend was a talented motocross rider who won national titles.

McIver & Veitch motorcycle dealership posted on Instagram that Dunedin man Grason Veitch (18) was killed in the crash, which happened in Ravensbourne Rd about 3.45am on Sunday.

"Our lad Grason Veitch was tragically taken from us yesterday in a car accident.

"Our heartfelt sympathy go to his parents Dean and Maree, and adored big sisters Georgie and Madi and big brother Jack.

"Such a talented motorcycle rider at the young age of 18 and achieving many New Zealand titles during his career."

Bike Sport NZ said the community was in mourning.

"Hamish Macdonald, fellow Christchurch dirt bike racer Dylan Walsh, and Otago's Courtney Duncan, each of them currently racing in Europe, all paid tribute to their friend with posts on social media."

While at Otago Boys’ High School in 2018, Veitch claimed a national title on home turf at the New Zealand junior motocross championships.

He won all five races in the premier 14 to 16 years 250cc class to comfortably claim the title at Scorgies Track in Outram.

He also managed second in the 15 to 16 years 125cc class, finishing behind Wairoa's Tommy Watts.

"He was a teenager with a promising future ahead of him, a talented racer and keen hunter, too, and we extend our condolences to his grieving parents."

Two people were taken to Dunedin Hospital with moderate injuries after the crash.

The ute Veitch was in went through a fence, rolled and ended up on railway tracks below State Highway 88.