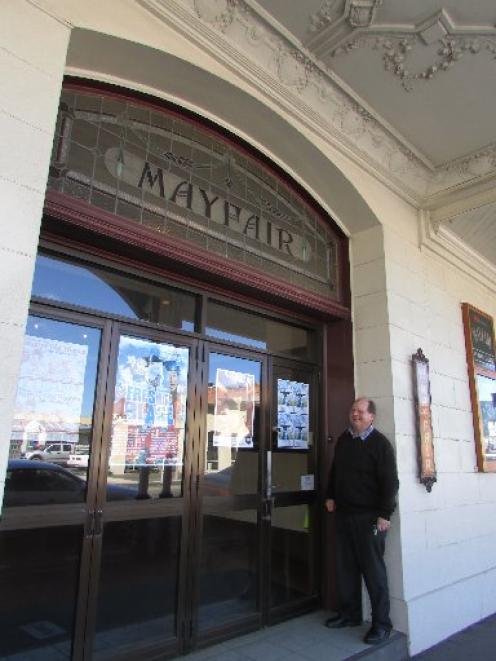 Mayfair Theatre manager and trust member Bruce Collier outside the main entrance to the South Dunedin theatre. Photo by Brenda Harwood.
A newly formed trust has big plans for the Mayfair Theatre, in South Dunedin, as the theatre celebrates its centennial year.

Opened as The King Edward Theatre in December, 1914, the theatre continued as a movie theatre until 1967, when it was bought by the Dunedin Opera Company. The theatre was re-named The Mayfair in 1934.

The Mayfair was converted into a 400-seat live theatre, with stage and dressing rooms added, and has continued to be used for Opera Otago, touring and local productions.

This year, the independent Mayfair Theatre Charitable Trust has been created specifically to take over the running of the theatre.

The separation of the Dunedin Opera Company and its performance arm, Opera Otago, from the Mayfair Theatre Charitable Trust allowed the two groups to pursue their respective passions, Bruce Collier said.

The Mayfair had long operated as Dunedin's ''de facto'' community theatre, but this arrangement would allow more scope for that work, he said.

As one of the oldest surviving purpose-designed cinema buildings in New Zealand, The Mayfair is now registered as a Category 2 historic building by the NZ Historic Places Trust.

Preserving that history and ensuring its future is another important function of the new Mayfair Theatre Charitable Trust, which is planning to move forward with aspects of the theatre's redevelopment plan, initiated in 2008.

Although the original five-stage redevelopment plan, priced at $7.35 million in 2008, would be revised, the trust was committed to working towards completion of most of the first three stages, Mr Collier said.

It was estimated this work would cost about $2.5 million.

''There are aspects of the other stages of the redevelopment plans that we would love to have, but we have to be realistic about the cost,'' Mr Collier said.

The trust planned to formally embark on a theatre redevelopment fundraising programme later this year.

''In the meantime, things are fine for us to keep operating the theatre as we are.''