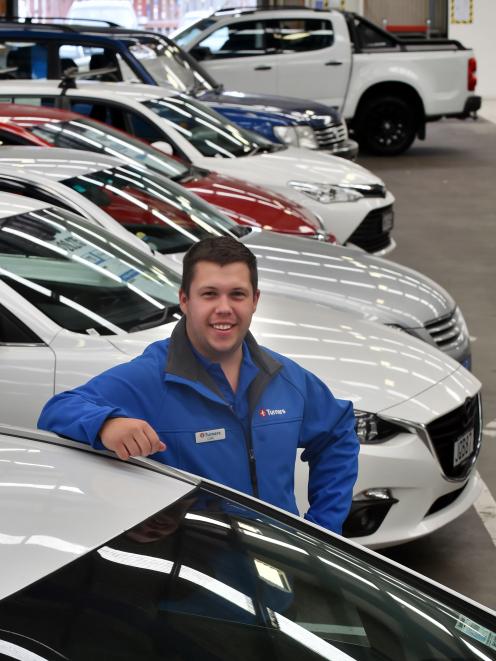 Turners salesman Joel Frecklington at the Dunedin auction site. Photo: Gerard O'Brien
A car subscription service will soon be available in Dunedin and Invercargill for drivers who want to avoid car ownership.

Turners has invested $1.038million for a 12.1% stake in Collaborate Corporation, the Australian owner of peer-to-peer car rental service DriveMyCar and subscription service Carly, which it launched in Australia in March last year.

The venture, Carly.co, will be launched in Auckland in March, and will be introduced to other urban centres, including Dunedin and Invercargill, in the coming months, the company said.

He said alternative vehicle ownership models were on the rise internationally.

Subscription programmes were likely to account for about 10% of all new vehicle sales in the US and Europe in the next five years.

In New Zealand shared ownership schemes such as Yoogo Share had gained market share, although the majority of users were larger corporates and local authorities.

The Christchurch City Council, for example, used a fleet of electric vehicles leased to it by Yoogo.

Mr Rooke said unlike other models, Carly was aimed at a consumer market.

Prices would range from about $120 to $170 a week, depending on the rental requirements or how many times the client changed vehicles a month.

‘‘Generally, the subscription fee would be linked to the value of the vehicle, though it’s also important to remember that it will also include insurance and maintenance — pretty much everything except fuel and parking costs.’’

Turners chief executive Todd Hunter said new, flexible products such as peer to peer car rentals and car sharing were a part of the future.

‘‘We really like the industry-inclusive approach Carly has taken in Australia and we will mirror this in New Zealand.’’