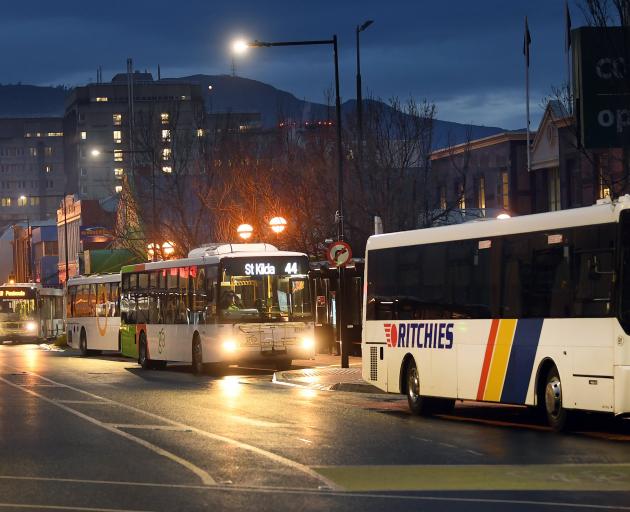 Dunedin’s bus hub, which reportedly has been the scene of some youthful misbehaviour recently. PHOTO: STEPHEN JAQUIERY
In the wake of violence among groups of young people gathering at Dunedin’s central city bus hub, the Otago Daily Times spent several hours at the hub to see what it is like. While many say it is generally a peaceful place, young people say they feel unsafe. Wyatt Ryder reports.

There is an air of calm at Dunedin’s bus hub on a Thursday morning.

A handful of people sit around waiting for buses.

Others, on their way to or from coffee dates, the supermarket or off to the shops, scurry through.

After school that day there’s a bit more energy.

School uniforms dominate the scene, with groups of young people dotted around the bus shelters, chatting, messing around, eyeing each other up.

Some are sitting outside the police station, lining its low concrete wall, lawn and trees offering a pleasant spot to sit and chat with friends.

No real mischief is obviously afoot.

That has not always been the case in recent times.

Police first raised concerns last month about the amount of bad behaviour at the bus hub.

Issues included youths being drunk, getting into fights, huffing aerosols, bullying, and generally being intimidating.

Footage of violence at the bus hub was shared on social media and reported in mainstream media.

It was found CCTV cameras installed by the Otago Regional Council during the hub’s construction were not activated so there was no monitoring.

The Dunedin City Council, which manages a network of cameras in the central city, is going to run them.

The councils are working on an agreement to transfer responsibility for the CCTV cameras from the regional council to the city council. A city council spokeswoman said the exchange was expected to be completed in about three weeks.

That will be a comfort to people using the hub, who say CCTV would provide reassurance.

When the ODT visited there was no sign of disturbance, but plenty of those spoken to had seen or heard about incidents. Some were worried.

People were reluctant to be identified, largely from fear of being targeted, they said.

Most teenagers spoken to said they felt unsafe when using the bus hub, especially after school and at night.

Many said they made sure never to come alone because they only felt safe in a group.

Secondary school pupils would cause trouble almost every day, they said.

Large groups would spend time at the hub vaping and shouting, and sometimes they would hit people.

An 11-year-old girl said she felt constantly unsettled when at the hub, and she sometimes went inside a nearby store to feel safer.

Almost all of the young people spoken to said they thought turning on the CCTV cameras would be a deterrent.

"How hard is it to turn some cameras on?" one 16-year-old girl wondered.

One 13-year-old girl, however, believed the cameras still worked as a disincentive even if they weren’t working, as most people would not know they were not being monitored.

Other, older people at the bus stop said they felt safe enough.

One woman waiting for a bus said the mischief she saw was mostly groups of teenagers yelling at pupils from other schools, and they never bothered her.

Another said she did not like the way the teenagers congregated in large groups, but they never made her feel unsafe.

One bus driver said he saw "a lot of bad behaviour" taking place, usually about 6pm.

It was mostly yelling and "annoying" minor misbehaviour.

He was unhappy that, in his opinion, the police seemed to do "nothing", despite the central police station being next to the hub.

One woman who spent a lot of time at the bus hub, said she regularly saw bullying and sometimes drunk people and people hanging out in large groups yelling. She said it was not helpful for it to have been made public that the cameras were not being monitored, because they had been a good deterrent before that.

How is this happening outside the central Dunedin police station is my initial thought, then i think about how you can teach your children respect towards others but from 9-3 they are exposed to other children who may not have been instilled with these good values. thinking back the place where i felt most unsafe was school. Are we not teaching these kids that one mistake can effect there whole life? Just as smiles are contagious so are the behaviors of others.