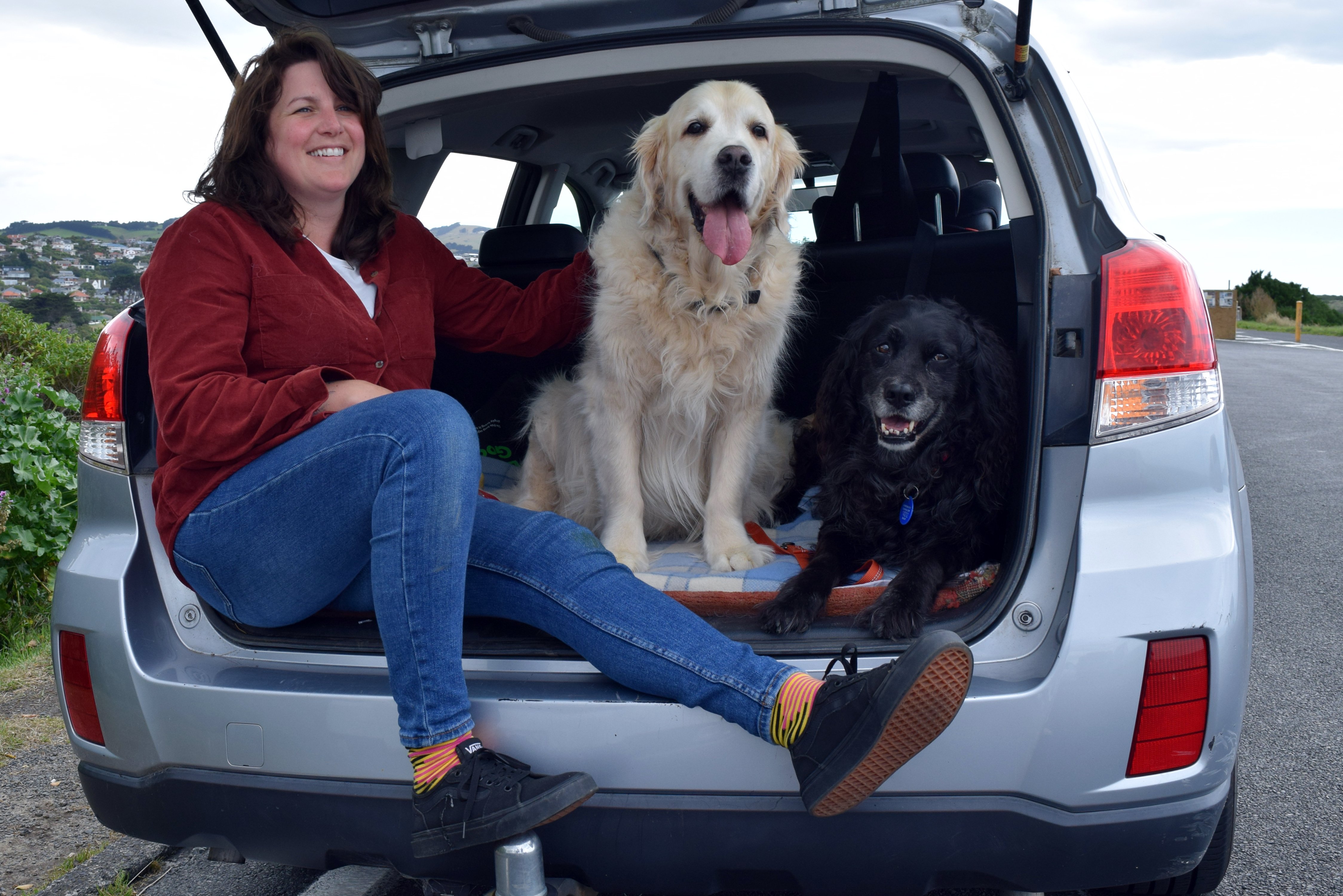 Back at the car after a walk along John Wilson Ocean Dr in St Kilda on Monday are Bridie O’Leary, her mother’s golden retriever Louie and her aunt’s English springer-spaniel cross Skye. PHOTO: SHAWN MCAVINUE
An outbreak of a "highly contagious" dog disease is spreading "like wildfire” across Dunedin, a vet staff member says.

The Dunedin vet clinic staff member, who asked not to be named, said dogs with canine cough were coming to the clinic on a daily basis.

The "highly contagious" disease was spreading "like wildfire", she said.

She likened it to a person experiencing a "low-grade common cold" .

Clinical signs in a dog might include a loud, high-pitched cough, similar to a “goose honk”, loss of appetite, lack of energy, retching or hacking and a nasal discharge.

Coughing could last for several weeks and might be exacerbated by exercise, she said.

If a dog showed clinical signs, it should be isolated and a vet should be contacted for advice.

The vet clinic must be called before a dog was taken in so appropriate measures could be used to keep other dogs safe.

Vaccination did not protect a dog "100%", but if a vaccinated dog became infected it got a "less severe form of the disease".

"For that reason alone, it’s worthwhile continuing to vaccinate."

The disease was highly infectious but was not often fatal, Dr Beattie said.

Dogs most at risk from the disease were either very old, very young or otherwise ill.

The disease had been in New Zealand for several years and had no relation to Covid-19.

"Please do not put masks on dogs if they have a cough."

The disease had the potential to be transmitted to humans, but this was "incredibly rare".

"It’s not something people should be fearful of."

Good hygiene should always be used when dealing with animals, Dr Beattie said.

A dog could catch the disease in any season, but it was often more prevalent at this time of year due to dogs mixing more.

The disease was once unfairly known as kennel cough.

As the condition could be spread anywhere dogs mixed, the term kennel cough was a "misnomer".

Keeping a dog at home to avoid canine cough could raise other welfare issues.

"If you see a dog coughing at one end of a dog park then you probably wouldn’t go in."

On the walk she met her niece Bridie O’Leary, of Wellington, who was walking her mother’s golden retriever Louie.

Ms O’Leary was not concerned about canine cough, as Louie was old and rarely visited spaces shared by other dogs.

"This is his first trip out in a while."

Mrs Hyndman said she knew canine cough was "rife"in Dunedin but as Skye was"old and infirm" the only dogs she enjoyed mixing with were ones she knew, such as Louie.