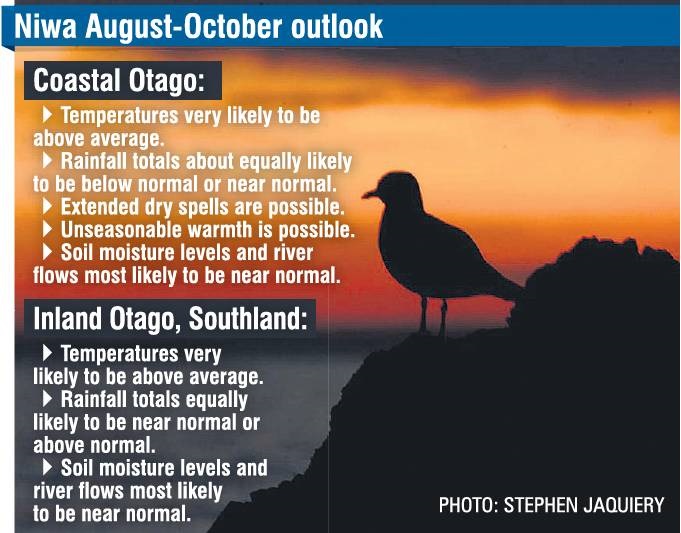 "Unseasonably" and "unusually" warm and dry weather may be on the way for coastal Otago residents over the next three months, as Niwa watches for another La Nina weather system.

"[Coastal Otago] temperatures are very likely to be above average, and rainfall totals are about equally likely to be below normal or near normal.

"Extended dry spells, unusual for the time of year, are possible and periods of unseasonable warmth are possible due to more northwesterly winds.

"Soil moisture levels and river flows are most likely to be near normal."

☀️ Drying out for some regions in the east & north

🌧️ Heavy rain at times in the west

In Southland and inland Otago, temperatures are also very likely to be above average, but rainfall totals are more likely to be near normal or above normal.

"More westerly wind flows can bring frequent fronts to the region, elevating the potential for heavy rainfall events," he said.

However, soil moisture levels and river flows were most likely to be near normal.

He said trade winds were enhanced around the equatorial Pacific and were expected to continue, which was consistent with an atmosphere that was trending in a La Nina-like direction.

A negative Indian Ocean Dipole had also been classified during July, referring to well above average sea surface temperatures in the tropical eastern Indian Ocean.

An Atlantic Nino, characterised by warmer than average ocean temperatures in the central and eastern equatorial Atlantic, persisted throughout the month.

These climate patterns related to one another across long distances, and also supported an ocean-atmosphere system that was likely to continue to trend in a La Nina-like direction, he said.

"On the balance of evidence, the re-emergence of La Nina or continuation of ... cool neutral conditions are about equally likely over the coming three months."