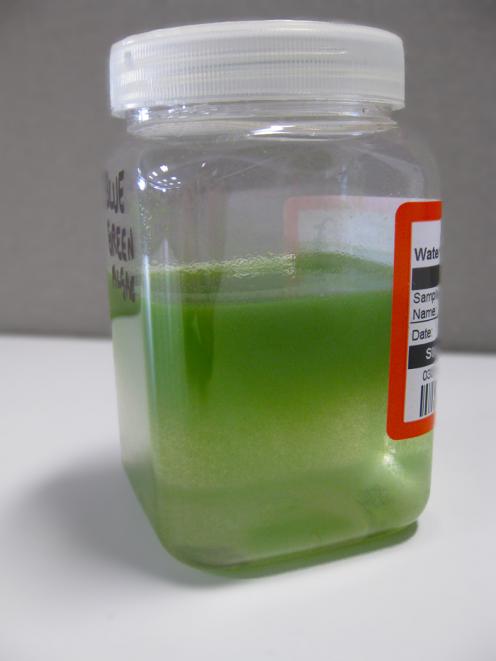 A sample confirmed the presence of the toxic blue-green algae. Photo by ORC
Warnings have been issued to swimmers and other water users following the appearance of a toxic algal bloom in Lake Waihola and Tomahawk Lagoon.

A sample taken from the lake had confirmed the presence of the toxic blue-green algae, ORC director of environmental information and science John Threlfall said.

The algae occurs naturally in a variety of water quality conditions

The water in Waihola looked very green at the moment, owing to the algae, which had the potential to produce a series of toxins which were then passed to the water; this could cause illness in people and animals, Dr Threlfall said.

The degree of toxicity was impossible to accurately predict: however, the algal samples would be tested for toxicity early next week, he said.

People should not swim in areas affected by the algae, and other water users, including fishermen and boat users, should exercise caution, she Poore said.

People could safely walk their dogs on the lakefront, provided they kept them well away from the water.

"In the case of illness or suspected illness after swallowing water containing algal bloom, seek advice from your doctor. If your animals become sick, contact your veterinarian immediately," Dr Poore said.

Dr Threlfall said: "We appreciate that a holiday weekend is upon us, and that swimming in the lake is a popular pastime, but we consider the safety and health of people and their animals to be paramount."

The council has put up warning signs at the locations where the algae has been found, and will continue to monitor the situation, along with Public Health South.

Dr Threlfall said people should be wary of the possible presence of toxic algae in rivers and lakes throughout the region this summer. ORC and PHS will continue to monitor the situation.