Burnt pans, ripped clothing and empty vodka bottles are just some of the items Dunedin charity stores are spending thousands taking to the tip.

With landfill charges set to increase, some charity shops are worried about what this may cost them.

Shop on Carroll manager Fiona Dodds, who manages two city op shops, said the donations people made were greatly appreciated, but at this time of year people leaving items that could not be sold was an issue.

The likely increase in tip fees was ‘‘really unjustified’’ and would ‘‘affect charities hugely’’. 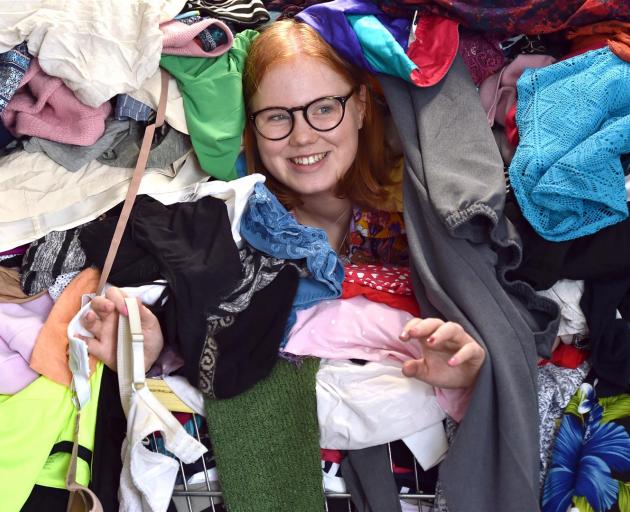 Among a large pile of clothes waiting to be sorted is Shop on Carroll retail assistant Sophia Borthwick. Photo: Peter McIntosh
A collection came twice a week to Shop on Carroll to take items to the landfill, with costs coming out of the charity’s finances.

‘‘However, New Zealand has one of the highest volumes of waste per person going to landfill in the OECD.’’

The Dunedin City Council provided reimbursement grants of up to $400 when using DCC landfills.

Ms Irvine said if the group or organisation was involved in voluntary community work on a non-commercial, non-profit making basis they might qualify for the grant when dropping goods off.

An overall discount was contrary to the purpose of the 2008 Waste Minimisation Act and the 2013 Dunedin City Council waste minimisation plan, she said.

‘‘If an organisation qualifies for a reimbursement grant, this will help offset their waste disposal costs.

Dunedin SPCA op shop manager April Elliott said the time leading up to Christmas was ‘‘diabolical’’ for an excess of unsaleable items left at op shops.

‘‘I spent 19 years as the Salvation Army op shop manager and the tip fees to get rid of items that cannot be sold are phenomenal.’’

I know that times are hard for many but dumping stuff onto charities is not a cool way to deal with those issues.