Waterfront the next big thing? 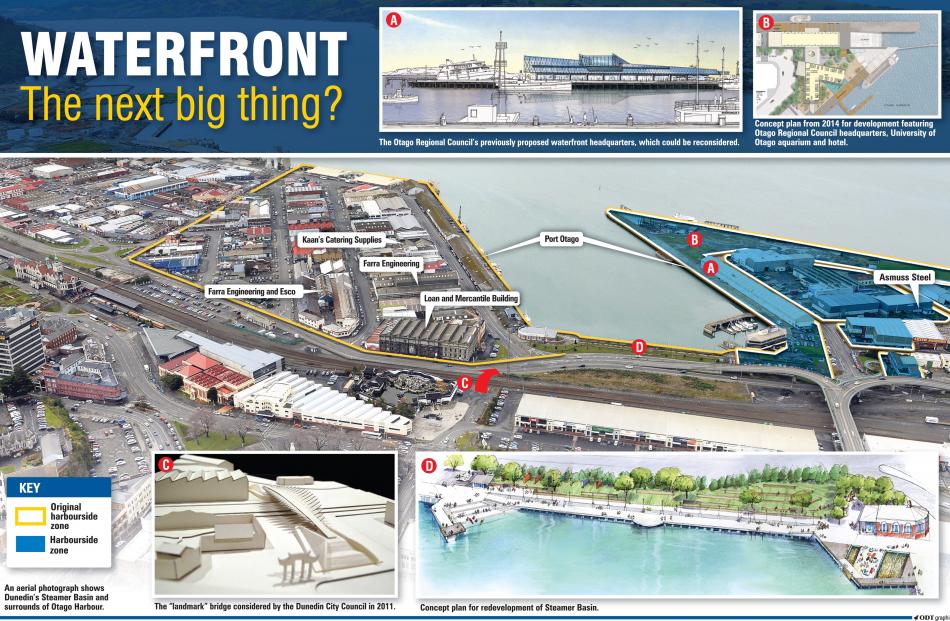 Dunedin's waterfront is the city's biggest missed opportunity, but the planets could be aligning for development, advocates say. Chris Morris reports.

Depending on who you talk to, the waterfront around Dunedin's Steamer Basin is either a cold, windswept industrial hub or the city's next big thing.

Where some see room for only the existing cluster of industrial businesses and dilapidated buildings, others imagine a waterfront like Wellington's - populated by cafes, bars, restaurants, apartments and hotels.

It is a vision that has long been mooted for Dunedin, but progress has remained stymied by opposition and inertia, Environment Court action and talk, talk, talk.

But, at last, it appears the planets might finally be aligning in favour of development.

The Otago Daily Times understands Mayor Dave Cull's push to attract more hotels to Dunedin includes talk of a waterfront location next to the Steamer Basin.

The University of Otago has also confirmed it remains interested in the area as the future home for an Otago Marine Institute, including a public aquarium.

The institution is said to be in discussions with Port Otago subsidiary Chalmers Properties about the purchase of a site next to the basin, although negotiations remain sensitive.

The Otago Regional Council has also confirmed this week it has begun a fresh review of its office needs, including the case for a new waterfront headquarters - something chairman Stephen Woodhead said he favoured.

At the same time, developer Russell Lund is working towards approval of apartments inside the nearby Loan and Mercantile building, which would bring dozens of permanent residents into the area.

That, together with the other big-ticket developments, was expected to help fuel the rise of smaller hospitality businesses in the area, as seen in the Warehouse precinct already.

It all adds up to a snowball needing only a push to gather some momentum, but that nudge could come in the form of a crucial missing link - a new bridge.

The bridge would provide a link for pedestrians and cyclists wanting to cross the railway line from the Chinese Garden to the Steamer Basin.

The project has been mooted before, only to fall flat, but the Dunedin City Council is trying again. A report canvassing the options, including alternatives ranging from an underpass to a level crossing, is expected later this year.

The council also has $6.6 million from the New Zealand Transport Agency for projects including the missing link.

Dunedin Mayor Dave Cull said he was ''agnostic'', for now, about the choice of a bridge or an underpass, but something ''definitely needs to be done''.

''There's an enormous opportunity, recreationally and socially, to bring the area alive . . . it could really take off,'' he said.

''That would transform the place - it would more than transform it; it would revolutionise it.''

He favoured a mixed development of restaurants, cafes, apartments and a hotel, focused on the southern side of the Steamer Basin, while protecting industrial businesses, and their jobs, to the north.

That was in line with the scaled-back harbourside zone agreed in 2012, after much debate and an Environment Court challenge led to a mediation solution that protected businesses north of the basin.

His views were backed by most councillors contacted by the ODT, including Cr David Benson-Pope, chairman of the council's planning and regulatory committee.

''For me, the whole area is the No1 missed opportunity for Dunedin. I think we need to get on with it,'' he said.

Others agreed, including Crs Neville Peat, Aaron Hawkins and Jinty MacTavish, who believed the city needed to do more to take advantage of its waterfront and make the area a people magnet.

Cr Hilary Calvert favoured a more measured approach, limiting the cost to ratepayers while focusing on small improvements, while Cr Andrew Whiley said the area needed to be ''celebrated'' and developed.

That should include anchor projects, but also other initiatives such as a market and car-free Birch St, while industry gradually shifted to the Taieri.

But, perhaps most importantly, some of the area's key players - including the ORC, Port Otago and the Otago Chamber of Commerce - have all vowed to support development.

The ORC, Port Otago and its subsidiary, Chalmers Properties, together own vast tracts of land along the waterfront, much of which is leasehold land occupied by businesses in the area.

Critics have argued that stymies attempts to develop the area, but Port Otago chief executive Geoff Plunket says he is in favour of developing the area.

Any such activity would be gradual, given the city's slow growth, but redevelopment of the area south of the Steamer Basin - already rezoned for mixed use - was a ''logical'' next step, he said.

ORC chairman Stephen Woodhead said his council, like its companies, was ''hugely supportive'' of development in the harbourside area, beginning south of the Steamer Basin.

''There's a huge opportunity down there.''

Enterprise Dunedin director John Christie said his organisation was already working to promote the type of economic growth that would help fuel investment in the city, including the harbourside.

And Otago Chamber of Commerce chief executive Dougal McGowan said a mixture of businesses could coexist in the area, as long as any new development was not to the ''detriment'' of existing businesses.

That would depend on good planning and consultation to avoid hurting what was already there, he said.

''When they are done well ... there are good examples of it [mixed development] working really well.''