Whose old pole is it? 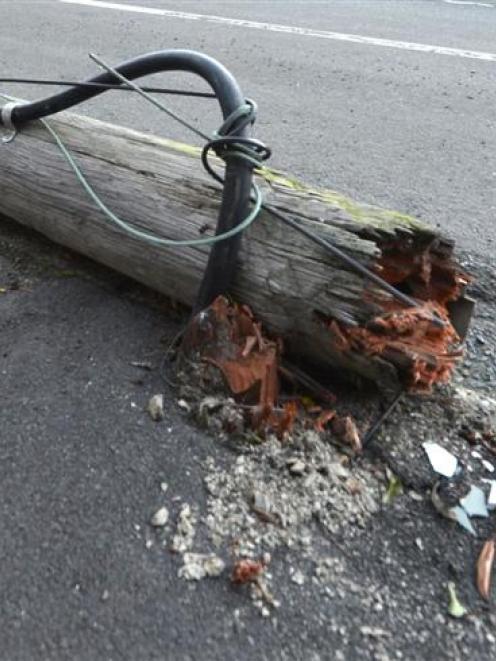 Some homeowners may own the power poles which supply their houses and are therefore responsible for the poles' maintenance and replacement.

It was an issue which was complex and did not have much ''visibility'' and homeowners should ensure they were aware of what they owned, Delta general manager asset management Derek Todd said.

About 1000 power poles (3.4% of all poles) in Dunedin owned by Aurora Energy are ''red-tagged'' - in need of possible replacement within three months.

But the number of privately owned power poles was unknown, as was the number which needed replaced.

In general, if a pole was installed before 1984, it would be owned by Aurora Energy.

However, chances were if a pole was installed after 1984, was on private property and fed one house, it was the property of the homeowner, Mr Todd said.

Ageing power poles may hit homeowners in the pocket. Some power poles are privately owned and homeowners are responsible for their upkeep and replacement, even if they are unaware of it. Photo by ODT files.
''We encourage people to contact us to clarify the ownership issue, The owner is responsible for those checks [on the condition of the pole], but we offer the homeowner assistance for that too.''

An electrical inspector approached by the Otago Daily Times said the issue was increasingly common.

''People are finding out about it as poles get older and start falling over,'' the man, who wished to remain anonymous, said.

While a replacement pole could cost about $4000, doing nothing could be more costly as it affected homeowners' ability to get insurance.

The house would not pass an electrical inspection report if the poles on the section were not up to standard, although he had ''not struck that particular issue yet''.

It could also delay sale of properties and most homeowners would not be aware they were responsible for the state of the poles, he said.

Ms Nidd believed homeowners and prospective home buyers needed to clarify the ownership of poles which fed their house before it affected the house's sale or ability to be insured.

''There needs to be a level of awareness that there hasn't been previously,'' she said.

''I have been in the industry for over 25 years and I had never heard of this.''

Electricity and Gas Complaints Commissioner Judi Jones said power-pole ownership was a complicated issue and needed to be managed on a case-by-case basis.

''There's a view in the industry that all service lines and poles were transferred to homeowners. That's not true,'' she said.

In some cases, legislation passed as early as 1908 could affect the ownership of power poles and homeowners being asked to foot the bill should seek advice, she said.

Mr Todd added that different areas' line companies had interpreted the laws and regulations differently, so he advised prospective and new homeowners to clarify ownership if they had concerns.