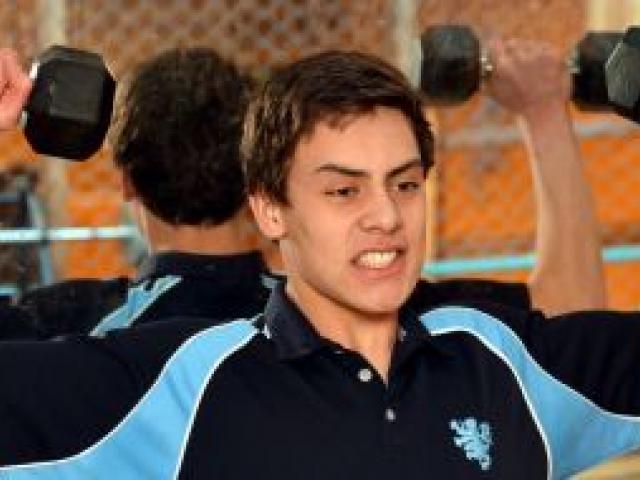 Tame Govaerts lifting weights at the King's High School gym. Photo by Peter McIntosh.
It is not generally the done thing for a young New Zealand athlete to look up to a South African.

But if a teenage swimmer is concentrating on breaststroke, Cameron van der Burgh is not a bad idol.

Tame Govaerts (15) would love to carve out a career even nearing that of van der Burgh, a gold medallist at the 2012 London Olympics in the 50m breaststroke.

''His stroke is really nice and he's got a couple of world records,'' Govaerts said.

The year 10 pupil is making a decent fist of it already, collecting gold medals in the 100m and 200m breaststroke at the national age-group championships in May.

His gold medal performances ended up being comfortable victories - a 1.7sec winning margin in the 100m and a 3sec victory over the 200m.

He backed up those two titles with a silver in the 50m breaststroke and a bronze in the 200m individual medley.

Govaerts might not be swimming at all if it was not for a water safety campaign when he was 6.

''I first started swimming when I was about 6 years old for a couple of years and then I stopped,'' he said.

''I mainly learnt to swim to keep yourself safe in the water.

''I came back when I was about 11 and tried to learn the skills again.

"From there, I found a passion for it and started swimming more and more.

"When I was about 12 was when it really kicked off and I started improving and got faster.''

Breaststroke is one of the tougher strokes to master, with timing and rhythm playing a major part.

''I tried to work hard on it and I found it easier.

"I started winning a couple of races ... then later on, my coach said maybe you should work on this because you're getting quite good at it. So I've adopted that as my main one.''

Govaerts' strengths lie between the 50m and 200m and he should only get stronger - not only filling out his 1.94m frame, but also in technique - over the coming years.

''I'm just hoping to break a couple of Otago records in the next 12 months,'' he said.

''At next year's nationals, I'm hoping for more than three gold medals.

''The Olympic breaststrokers tend to be older than people that do other strokes.

Govaerts plays some social basketball in his spare time, and enjoys the design subjects at King's, such as art.

But training takes a fair toll on the mornings - not only on Govaerts, but his mother, Karin.

''I really want to thank her. She drives me every morning and I have to be at the pool by 5 o'clock in the morning,'' Govaerts said.