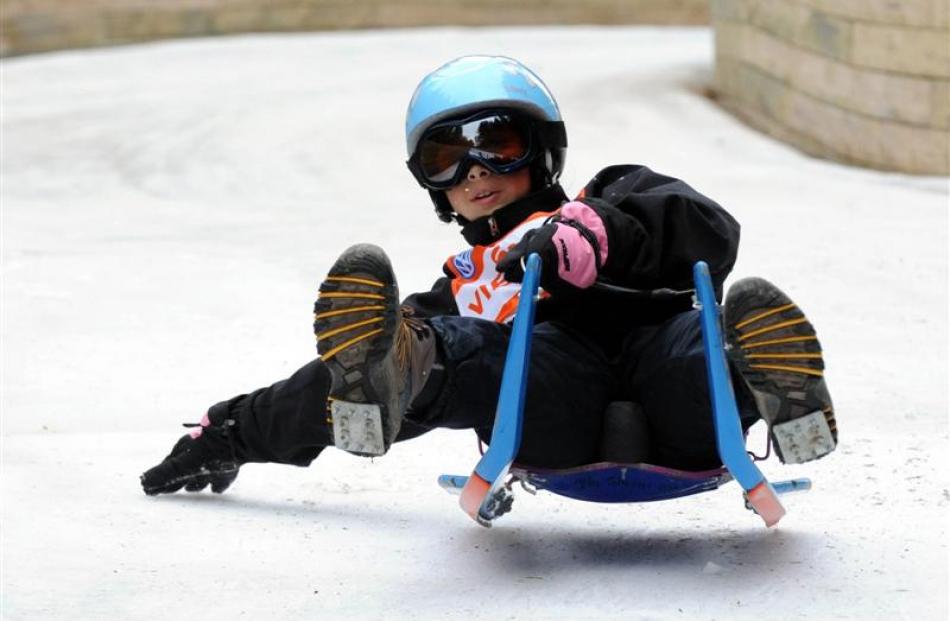 Tyla Toheriri O-Neill flies down the track during the natural luge event in Naseby at the 2009 Winter Games. Tyla, a year 9 pupil at Columba College, won the New Zealand under-21 title in Naseby as part of this year's Winter Games. The boarder from...

These articles are compiled by the Otago Secondary Schools Sports Association Inc (OSSSA) which is proudly sponsored by Perpetual.

The Columba College netball team finished third at the recent South Island schools tournament in Nelson. In doing, it has now qualified for the national tournament for the second year running. This is a fantastic achievement for this young team, which has gone from strength to strength in 2011 after losing five year 13 players at the end of 2010.

Columba College progressed through pool play beating Mt Hutt College (50-14), Nelson College for Girls (35-26) and Marian College (34-26). All team members were involved in the games as Columba showed improved performances with each outing.

In post-section play, Columba won comfortably against Gore High School (42-16) and Rangiora High School (45-20) and then edged Waimea College 26-24 to secure a place in the semifinals. A young player to impress during these early games was wing defence Grace Carruthers, a year 10 pupil who is in her first year in the team. Columba College played Craighead Diocesan in the semifinal and, despite playing good netball, lost 31-37. In the playoff for third and fourth, Columba beat St Margaret's College 30-29.

Columba College won the cup for best goal differential during the tournament, a cup normally awarded to the winning team.

Bridget Thayer, Sophie Napper and Renaye Flockton were all rewarded with tournament team selections for their outstanding and consistent performances.

The Columba College football team recently attended the tournament at Sir Basil Arthur Park near Timaru. Columba won three and lost three games during the week, putting on some fine team performances when it mattered.

Melissa-Jane Austen was nominated as most valuable player for the team by opposition coaches.

Blue Mountain College has had outstanding sporting success over the past weeks. At the recent South Island schools junior netball tournament in Christchurch, the Blue Mountain team was second in its mixed-age section, losing to Cashmere High School in the final.

The A netball team travelled to Nelson for the South Island tournament where it played well, finishing 10th of 32 teams in the B section. Outstanding goal keep Leah Gardyne played consistently and was named in the B grade tournament team.

Blue Mountain College also had Sinead and Caycee Cormack, along with Gemma Townshend, in the Otago secondary schoolgirls rugby team, with Sinead being named as the most valuable player for Otago.

Gavin Stark and Garth Devereux were selected for the Otago Country under-16 rugby team which played in Greymouth. The team defeated Buller 74-0 and North Otago 68-0 to easily win the plate section.

The Blue Mountain College boys C grade and E grade basketball teams also won their Eastern Southland competitions. Blue Mountain College only has 143 year 9-plus pupils so these successes against much bigger schools are due largely to the sporting talents of all these pupils and the high calibre of volunteer coaches.

Several boys from Roxburgh Area School have been playing rugby for Dunstan High School's under-15 team and got the opportunity to play in the South Island tournament last month. Boaz Turner, Ashley Sim, Anthony Sim and Johnny Tumai all played, with Boaz being named most valuable player for the team and gaining selection in the tournament team.

All play regular Saturday rugby for the Roxburgh club and played in the tournament in Dunedin last month.

Shanna Moore, who plays regular rugby for the Blue Mountain girls team, was selected in the Otago under-18 team. The team played recently in Sheffield, near Christchurch, where Shanna was named player of the day for the Otago team.

Serena and Meghan have also been selected in the Otago Country under-19 netball squad along with Abby Dennis. Emma was picked in the Central Otago under-17 squad and Tahlia Moir the under-15 team.

Cromwell College pupils Brad Thompson and Ethan Edmund-Scott have been selected in the Otago under-20 rowing squad to compete at the New Zealand provincial championships on Lake Ruataniwha in October. The boys were selected for the team after an intensive trial in Dunedin last month. They competed in 10 races in different positions in the boat so the selectors could work out the best combinations. A team of eight rowers was selected for the championships, to compete in the pairs, fours and an eight.

The year 9 A netball team won both of its grades this season. The team won the senior reserve grade and was moved up into the senior B grade, also winning this. The girls have had a great work ethic all season and this was evident on finals day when they beat Cromwell College B 26-16.

Michel Decke and Devon Matherson were selected for the Otago Country under-16 rugby team.

Winter tournament week has been the focus for many pupils over the past month. Pupils from Catlins joined teams from neighbouring South Otago High School to play rugby in Alexandra, hockey in Ashburton and soccer in Timaru.

The school netball team returned from the South Island championships in Nelson as C grade champion. The girls finished the tournament unbeaten, against schools who mostly have rolls larger than Catlins. To cap off a fine week, Jessica Cairns was then selected as a C grade talented player.

Players selected in Otago Country rugby squads were Duncan Leslie (under-18), Reuben McLay (under-16) and Cameron Way (under-14).

A South Otago-wide basketball competition has been completed, with Catlins players acquitting themselves well.

In 2003, Brent Matehaere took over basketball in the school and the top team has not lost a game in the local competition since. The Derek King trophy was presented to Basketball Otago in that year and the only name that appears on the trophy is Otago Boys' High School.

Emphasising the depth of the school's basketball talent, the year 9-10 team that finished second in the South Island made the semifinals, losing to Kavanagh College narrowly. A sound development programme, great facilities and the input of players, coaches and management have been the key to success.

The First XI boys hockey team went to a tournament in Ashburton during tournament week. Results included wins over Garin College, Ashburton College and a draw with St Kevin's College. Matt Krawiec was judged to be most valuable player of the tournament. With the loss of just one senior player at the end of the year, hopes are high that 2012 will be an even more successful season.

The senior A netball team travelled to Nelson to compete at the South Island tournament. The team is in a rebuilding phase, with six year 11 players. Despite winning only one game, 28-22 against Golden Bay High School, the girls showed their ability with good performances against Buller High School and Menzies College.