There are 25 new Covid-19 cases in New Zealand today.

Two of the cases are linked to the port worker who tested positive over the weekend and they are workplace contacts.

One of the cases was previously considered a casual contact of the port worker and worked in the same small firm. Dr Bloomfield said they had a small exposure - a few minutes in the same room - on Friday morning, and has one household contact also being tested.

They were a previously reported workplace close contact of the port worker, and they have been in quarantine at the Jet Park since Sunday. They were previously tested and had returned a negative result as part of regular testing of port workers.

He had symptoms yesterday and was tested yesterday. His close contacts are in isolation and are being tested.

Further interviews are under way with both new community cases, Dr Bloomfield said.

Infection on the Sofrana Surville ship, now in Brisbane, remains the most likely source of infection. No testing results from those on the ship are available yet.

The ship travelled from Brisbane to Tauranga and then to Auckland, where eight crew joined it from the Philippines. They had flown into New Zealand and were released from managed isolation on October 13.

The port worker worked on the ship on October 12 and 13.

There are 19 crew members on that ship.

Three Port Taranaki staff members who possibly came in contact with the man have all returned negative test results.

"We are extremely pleased for these staff members and our wider staff and port users," Port Taranaki chief executive Guy Roper said. 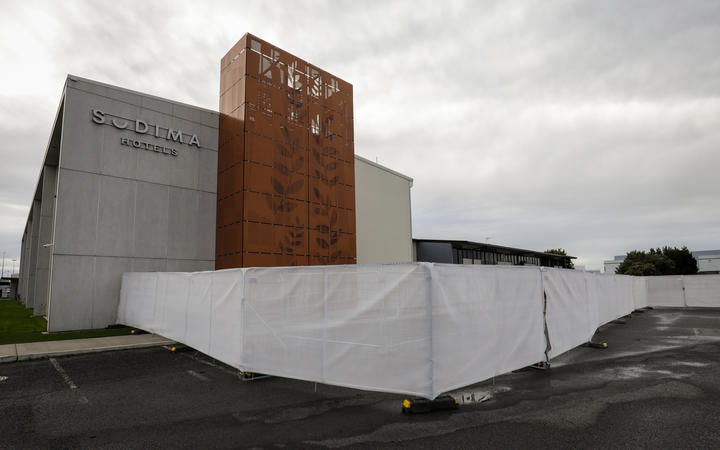 There are now 18 cases in the Sudima Hotel in Christchurch among the Russian and Ukranian fishing crews.

Yesterday 11 fishermen tested positive out of 237 crew who arrived on a flight from Moscow and landed in Christchurch last week.

They were all tested pre-departure, and Dr Bloomfield said two people didn't fly out because they tested positive.

They were tested via nasal swab, he added.

Some of the cases in the 18 people are new acute cases, and some are historical, he said, based on the CT values.

Those who have tested positive are now in a dedicated quarantine wing in the Sudima. Many are in twin rooms, and Dr Bloomfield said moving them into single rooms was being looked at.

"We are adding an additional day six testing for all those people, and that will happen tomorrow."

"This group may need to stay for additional days beyond the 14 days."

All staff at the Sudima have been tested, and their families will also have access to testing, as will the bus company that took them to the Sudima and airport staff in Christchurch.

"Pre-departure testing may add value but it won't change anything we do at this end."

Tighter restrictions for the next arrival of foreign fishing crew would be looked at, he said.

There was ability to assess the validity of the pre-departure testing, he added.

Dr Bloomfield said the foreign fishing crews were self-isolating for 14 days as well as testing negative before boarding the flight to New Zealand.

Sealord chief executive Doug Paulin said earlier the workers would have spent a period in isolation in their home country before boarding the plane. They also had to test negative within three days of flying.

"We've got some fishers that weren't showing symptoms and tested negative, but have since tested positive," he told Newstalk ZB.

He had yet to be notified if any of the workers who had tested positive were Sealord's workers.

Paulin said it was "fantastic" that the Government had set up such stringent border control measures.

Shortages in deep-sea fishing workers could not be filled by Kiwis in the short-term, Immigration Minister Kris Faafoi said at the time.

This morning a spokesman for Faafoi said there were no plans to change the border exception scheme.

Paulin said the fishing vessels had 100 per cent foreign crew and it had been that way for 25 years.

There were still 30 to 40 vacancies on the vessels with New Zealand crew "despite advertising up and down New Zealand".

He said young Kiwis were not inclined to do "more labour-intensive roles", and a life at sea was "not a life for everyone".

Dr Bloomfield said there were also three unrelated imported cases who flew in from London and who tested positive on routine day three testing.

A positive day 12 test raised the possibility of cross-infection while people were in quarantine, he added.

There were two imported cases in managed isolation in Auckland, who both tested positive on a day three test. They will both be transferred to the Jet Park quarantine facility.

There are now 56 active cases of Covid-19 in New Zealand.

"Putting our cases today in perspective, yesterday Spain announced around 48,000 new cases, and that would be the equivalent in New Zealand of around 4000 new cases.

"We have a significant pandemic. All that matters now is what we do now and what we do next... we are not being complacent at the border and all New Zealanders need to make sure they are not complacent in the community."

Bloomfield said there was now a good opportunity to look at the value of pre-departure testing.

Border exemption correlates with the suggested option of isolating vulnerable populations and letting it Rip.

A doctor and expert on COVID who pontificates on social and political policy, most impressive!