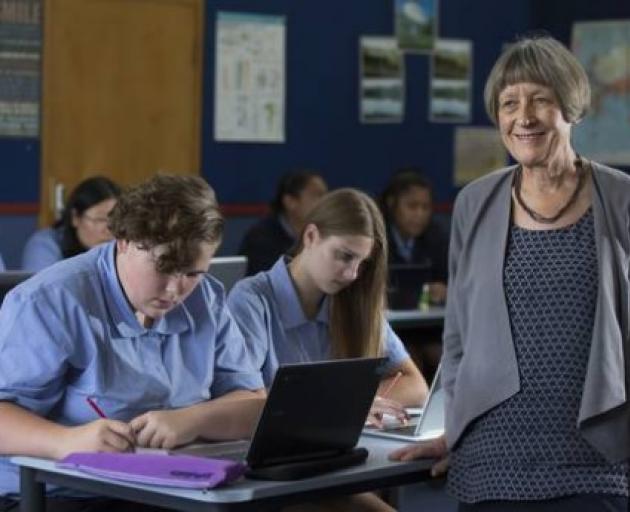 Waitakere College deputy principal Shona Smith leads one of the country's 214 "communities of learning". Photo: NZ Herald
Most teachers believe a $300 million initiative designed to increase collaboration between schools has flopped, a new survey has found.

The survey - the first national report on a tool for teachers to rate their schools anonymously - has found that teachers are overwhelmingly positive about most aspects of their schools. For example, 84 per cent feel they "work in a safe and supportive environment".

But only 34 per cent of teachers in "communities of learning", which were set up by the former National Government to increase collaboration between schools, believe the communities are strengthening their own teaching.

Only 40 per cent say the communities of learning have even given them "opportunities to collaborate with other teachers".

Berhampore School principal Mark Potter, who represented the NZ Educational Institute (NZEI) on an advisory group for the survey tool, said the communities were not working because the system was imposed on schools by the Education Ministry.

"It was not designed for communities to collaborate. It was designed for one entity, the Ministry of Education, to impose its ideas on what schools should be doing."

The communities were the flagship of a National Government initiative, "Investing for Educational Success", which was originally budgeted at $359m over four years - although the budget was underspent because the communities were slow to form.

Once achievement challenges were approved, communities were funded to appoint skilled teachers to work across and within schools to achieve their challenges.

"Across NZEI and PPTA (Post Primary Teachers Association), we'd rather you put that money into special education than into paying a few teachers to go around telling other teachers how to do their job," Potter said.

The report on the survey tool is based on the first anonymous responses from 4355 teachers in 335 schools.

Most teachers were remarkably positive about their schools: 88 per cent said their schools "set high expectations for students", 76 per cent said "every student has challenging (stretch) learning goals", and 91 per cent said "we effectively include students in our classes whatever their needs, strengths and identities".

As expected, teachers were less enthusiastic about workload issues. But even there, 62 per cent said "teaching time is protected from unnecessary interruptions", and 54 per cent said "teachers have sufficient time to discuss student progress and plan teaching together".

A surprisingly high proportion of the teachers (43 per cent) were "team-teaching" either all the time (14 per cent) or some of the time (29 per cent).

This partly reflects a ministry drive for multi-teacher "modern learning environments", but Potter said it would also include classes that have one teacher for part of the week and another teacher for another part of the week, and team-teaching within conventional classrooms.

Multi-teacher systems have been in many schools for decades. Most notably in high schools.