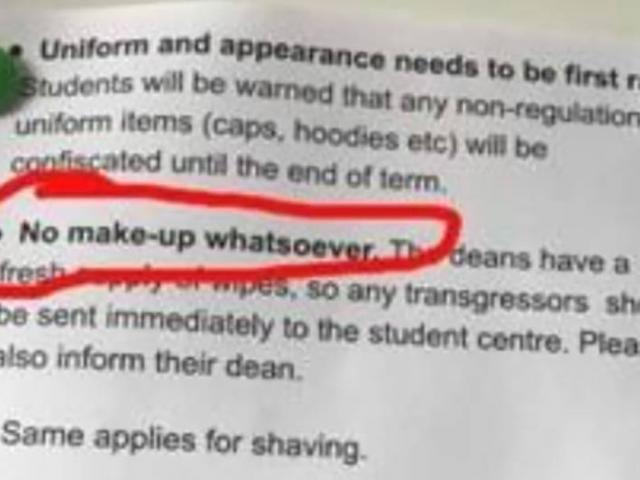 A photo of the note circulating among students. Photo via NZ Herald
Students at Auckland's Rangitoto College are outraged at a school rule banning makeup and forcing those who come to school wearing it to take it off.

A photo of a note, understood to be sent to teachers only, is circulating amongst students at the co-ed public school, who say it limits their right to express themselves.

But the high school's principal, Patrick Gale, said the rule was an old one which has been on their website for some time.

In the photo, the note about makeup reads: "No makeup whatsoever. The deans have a fresh supply of wipes, so any transgressors should be sent immediately to the student centre. Please also inform their dean."

This was more restrictive than the rule on Rangitoto College's website which reads: "Lipstick and eye make-up ARE NOT PERMITTED", in a subsection of rules about uniform requirements.

Year 11 student Grace Jack said she and her friends had felt disappointed when they saw the note.

"Everybody's pretty mad about the new rules," she told the Herald.

"We think it's a bit unfair... we're just a bit disappointed about it because we don't think our makeup should affect our education."

The decision to wear makeup was personal, she said.

"We don't wear it as a distraction. We don't understand why that shouldn't be allowed."

Her feelings were echoed by other students on social media, who questioned the strictness of the rule.

Gale, who started his tenure as principal at Rangitoto earlier this year, said in a statement he believed such a policy was common.

"This is not a new rule and as always staff discretion will be used," he said.

"At Rangitoto College we have a jewellery and makeup policy that has been in place for 30 years."

He did not answer specific questions asked by the Herald about the difference between the makeup rule outlined online and what was said in the notice.

"All students agreeing to adhere to our rules and policies when they sign their enrolment form," he said.

Jennifer Walsh, senior solicitor at Youth Law, said it was a grey area legally about whether a school could force students to wipe makeup off.

"Under the education act there's a broad discretion grants to school board of trustees and principals to make school rules."

It was widely accepted that this was necessary for officials to run schools effectively.

Students' human rights and right to express themselves were tempered against the power given to schools, but there had never been a case which tested the two against one another, Walsh said.

"There's not a definitive answer, it's yet to be tested in court."

In the case of schoolboy Lucan Battison, who won a High Court appeal allowing him to wear his hair long at St John's College in Hastings, the judge ruled in favour of Battison because the rule was too vague, not on Battison's human rights, Walsh said.

"There's not a definitive answer, it's yet to be tested in court."

"Many schools do have general bans or rules on a range of items which can include jewellery, makeup and non-uniform clothing and they are experienced in managing such issues and generally do so appropriately."

The personal assistant to the principal of Auckland Girls' Grammar School said the school had no formal rule, but it was understood students wouldn't wear makeup.

She said whether or not a student was reprimanded depended how much makeup they had on.

"If they had on a little bit of mascara, probably nothing [would happen]. If they had makeup on to the nines it'd be different - it's common sense isn't it."

Western Springs college principal Ivan Davis said as a non-uniform school, they did not have any policy around students wearing makeup.

He said teenage girls might wear makeup to hide acne, but most makeup at Western Springs was a bit of dark eyeliner.

When asked whether he thought it was fair to ask students not to wear makeup, Davis said instead he was simply glad he didn't have to confront students about such matters.

"We are lucky because we don't require that, so we don't have that hassle."

In July, Whanganui High School said it would review its uniform policy after one of its female students insisted on wearing trousers.

Karla Mills, 14, was sent home to change after wearing trousers to school.

Principal Martin McAllen said at the time he and the board of trustees would like feedback from the school community on "issues related to gender and school uniforms".

No one can physically force them to do anything. Schools may suspend pupils from attendance, if so exercised about normal teen behaviour.

As for being sent to the Dean, be darn sure the Dean is female.