Auckland has now returned to alert level 1 - with no restrictions on crowd gatherings - 14 days since the last community case of Covid-19, Prime Minister Jacinda Ardern has announced.

Meanwhile the Ministry of Health announced just before 1pm there were no new cases of Covid-19 in the community and only one new case in managed isolation.

It said all tests of contacts connected to the February outbreak have returned negative results. Five remaining close contacts tested today had been in quarantine for the past 12 days. Results are expected shortly.

The move to level 1 for Auckland is a godsend for organisers of major events such as the America's Cup - two races are scheduled for each of Friday, Saturday and Sunday afternoons - the Auckland Cup horse-racing event on Saturday and the Blues-Highlanders Super Rugby match on Sunday.

The Government has been under fire for not announcing the decision despite Cabinet meeting last night. Ardern said the Government wanted to wait to see the results of the last day-12 tests.

Shortly after 11.30am, she confirmed Auckland would move out of level 2 at midday today after the Valentine's Day cluster was contained. 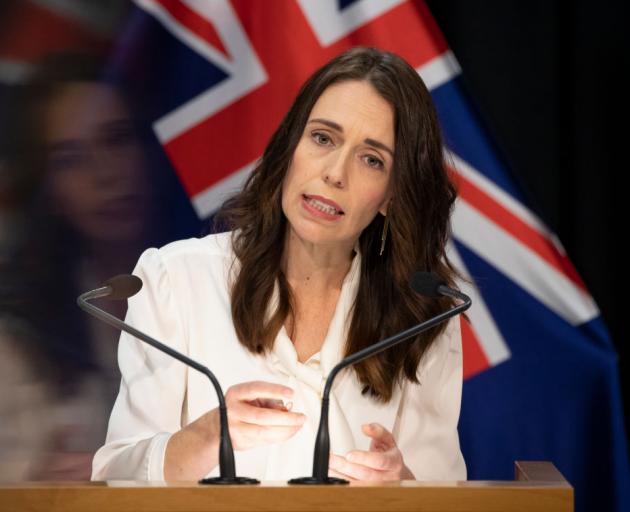 She thanked Aucklanders but said it's now time to "maintain the position we have all worked so hard for".

"Look after one another and enjoy your weekend," she said.

Asked why Cabinet didn't just meet this morning, she said that sometimes there was a "lag process" when it came to drafting the alert level change order. So doing it last night and "pre-preparing" meant that the move could be made as quickly as possible.

She said she hadn't seen her partner Clarke Gayford since yesterday and she pushed back strongly on the implication that he knew about the decision.

Earlier today, Gayford waded into the conversation about the Government's somewhat delayed move to announce whether Auckland would be moving down alert levels.

Former Wellington chef Martin Bosley took to Twitter to share his view ahead of the 11.30am announcement.

"Feeling really sorry for all Auckland hospo having to wait until 11.30am today to find out about moving levels," Bosley wrote. "It's utterly ludicrous. Stay strong, my friends. Keep the faith."

The PM's fiance, Gayford, replied to the Tweet; saying: "Martin an in principle decision was decided but its all pending on final test results (sic)."

She said the alert level period was based on Covid-19's two-week transmission period.

"It's not just about when we make the decision, it's about factoring in those time periods."
The last community Covid-19 case was exactly 14 days ago today.

As many took to social media to voice their frustration about the delay between the decision and the announcement, Ardern's fiancé Clarke Gayford backed her up on Twitter.

Former Wellington chef Martin Bosley said: "Feeling really sorry for all Auckland Hospo having to wait until 11.30am today to find out about moving levels. It's utterly ludicrous. Stay strong, my friends. Keep the faith."

To which Gayford replied: "Martin an inprinciple decision was decided but its all pending on final test results today."

Ardern said she had always said the the decision would be made before the weekend. "We have always taken a cautious approach."

She said she hadn't set a date for her vaccination yet - "but I do accept I am a role model".

The decision had been signalled. Covid-19 Response Minister Chris Hipkins said recently he was "optimistic" Auckland would be at alert level 1 this weekend.

And this morning, senior minister David Parker told the AM Show it was "looking good" for an alert level change.

Auckland Mayor Phil Goff said people needed to temper celebrations with the awareness that the rampant nature of the virus internationally and the number of returning New Zealanders in quarantine who are testing positive means we cannot rule out further incursions.

"The strongest protection against community transmission will be the widespread vaccination of New Zealanders," Goff said.

"With Aucklanders most often the ones forced to live under the restrictions of level 2 and 3, it makes sense for Aucklanders to get vaccinated after sections of the community most at risk and before the general rollout of the vaccine across the country.

"I want health authorities and the government to take the level of risk and the burden carried by this community into account before the general rollout of the vaccine in July.

"As New Zealand's largest city and international border Auckland has significantly more managed isolation and quarantine facilities than the rest of the country combined — nine times as many as Wellington and three times as many as Christchurch.

"Auckland is the region most susceptible to another outbreak. We don't want to face the health risks of a further incursion and we want to avoid the costs imposed on jobs, incomes and business by going into lockdown. I hope these facts are taken into account when the wider rollout is implemented."

Restaurant Association CEO Marisa Bidois also welcomed the return to level 1, saying it would allow "our Auckland based businesses to recoup some revenue after prolonged periods of restricted trading".

"We want to send a clear message to Kiwis that this city is very much open for business. So if you're an Aucklander, we encourage you put down your cook books and visit the fantastic eateries that are ready and waiting to serve you," Bidois said.

"We also need our government to come to the table and show some kindness towards those industries most hard hit by the pandemic. The constant last-minute closures and restrictions on trading put untenable financial and emotional strain on owners. Over the last few weeks, I have personally taken calls from owners in tears of frustration, on the verge of losing everything they have worked so hard for.

"We are now seeing the fallout from a year of doing it tough, with businesses closing and people losing their livelihoods."

Bidois also called on the Government to "step up and ensure that our industry is not overlooked when allocating relief".

Just wondering where on the 'reliability of information scale', does Clarke Gayfords Twitter account sit.
Somewhere between the 'Podium of truth' and the 'Unite Against COVID-19 website' maybe..?
Asking for a friend, who works at KFC..........

What other things are discussed at home, if you worked in a bank you would be fired discussing clients at home