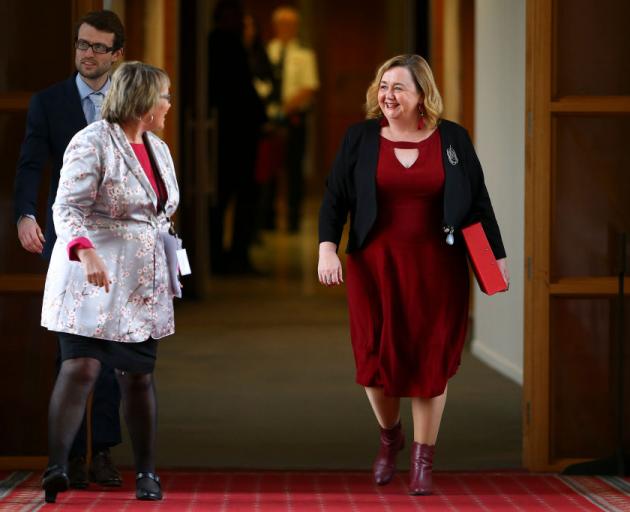 Ministers Tracey Martin and Megan Woods walk to the house during Budget 2020 delivery day at Parliament. Photo: Getty Images
The Government will borrow $5 billion in the next four to five years to build 8000 state and transitional houses in partnership with housing providers.

A $56 million fund will also allow low-income families in 9000 more homes to have their houses insulated and heated.

It comes as the state housing waiting list is at a record high of about 15,000, almost three times as much as it was when the Government came to power in 2017.

A Government spokesperson said construction had not started on any of the 8000 homes, meaning they would all be additional to the overall housing stock.

Along with the expected borrowing, Budget 2020 includes $570 million in new funding for the build programme.

About 70% of the homes to be built will be done by the Ministry of Housing and Urban Development, while 30% will be built by housing providers - but they will be paid for and owned by the Government.

This is different to the previous National-led Government's scheme, which partnered with housing providers to add to the state housing stock, but providers that built state homes then owned them and rented them out.

Housing Minister Megan Woods said the announcement sent a strong signal to the construction sector so it could secure investment, retain staff and employ those who would benefit from a new Budget 2020 package to make specific trades training free for two years.

She said an extra $100 million would cover 1650 extra places under the income-related rent subsidy for people who had been housed ahead of schedule over the past two and a half years.

The proportion of costs of an insulation and/or heating retrofit that the Government will pay for will be boosted for low-income households - from 67% to 90%.

The Warmer Kiwi Homes programme is part of Labour's confidence and supply agreement with the Green Party. So far the programme has provided more than 20,000 insulation and heating retrofits since it began in July 2018.

Woods added that more than 90% of the insulation products installed through the programme are made in New Zealand.