A woman visited 30 locations around Northland before developing symptoms and testing positive for Covid-19.

Officials were yesterday scrambling to contact trace the woman’s movements and notify anyone who may have come into contact with her.

Four close contacts had already been identified and put into isolation.

Announcing the case, which was the first in the community in New Zealand since mid-November, the Government said it was too early to know what response would be necessary.

Covid-19 Response Minister Chris Hipkins and Director-general of health Ashley Bloomfield gave details about the case at a press conference at the Beehive yesterday afternoon.

The woman arrived from London on December 30 and stayed at the Pullman Hotel MIQ facility in Auckland. The origin of the infection was not yet known and the strain was unknown.

The woman tested negative twice during her stay in MIQ before she was released. 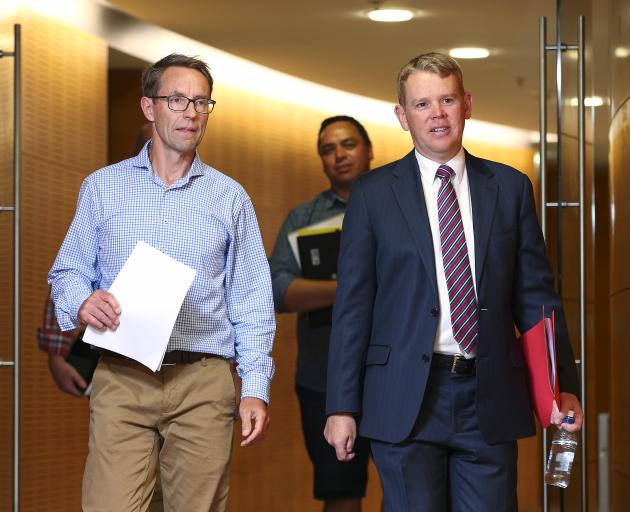 Dr Bloomfield said the person travelled in Spain and the Netherlands before arriving in New Zealand.

She had been to about 30 different locations in recent days, including areas around Mangawhai, Dargaville and Helensville.

She had been to cafes, restaurants, retail outlets and some Airbnb accommodations.

The woman had not been to any large events such as concerts.

The woman felt very mild symptoms on January 15. She did not associate those symptoms with Covid, but once they worsened she got a test. The result came back late on Saturday night.

She was "assiduous in using the Covid tracer app", Dr Bloomfield said.

If anyone was symptomatic, wherever they were in New Zealand, they should get tested, he said.

When asked for an interview yesterday afternoon, the Southern District Health Board responded with a statement from medical officer of health Dr Michael Butchard.

He said the Ministry of Health was still learning about the new case and DHBs would be guided by it regarding any next steps.

However, it was a reminder of the importance of maintaining many lines of defence against the virus, he said.

"I want to take the opportunity to remind everyone to please scan the QR codes for the Covid tracer app, and remember the basics of good hand hygiene, staying home if you’re sick, and getting a Covid test if you have symptoms."

Anyone in the southern area who had any symptoms and needed to arrange a test should call 0800 VIRUS19.

Earlier yesterday, the Ministry of Health reported that there had been eight new Covid cases in managed isolation since Friday.

Over the summer, many experts had warned of the need to keep scanning QR codes and avoid complaceny.

Last week, a Dunedin academic who helped organise an international study of Covid-19 contact tracing in the hospitality sector warned the issue had to be taken seriously.

Dr Raymond Xia, associate investigator of the collaborative study, said if new variants of Covid-19 — a "new threat to our public health" — got into the community, a lockdown could easily result.

A key for restaurants, cafes, and bars to encourage customer participation in contact tracing was to build trust by stimulating their thinking rather than their feeling.

He said demonstrating competency could be through clear and concise signage that talks with the customer rather than to them, with language such as "let’s all beat the virus together" preferred over "you must sign in or you will not be served".

Let's hope the authorities are able to put the cap on this quickly.
This disease is not over. 2021 is not a new leaf in the story. vigilance is required from all of us. Complacency will kill.