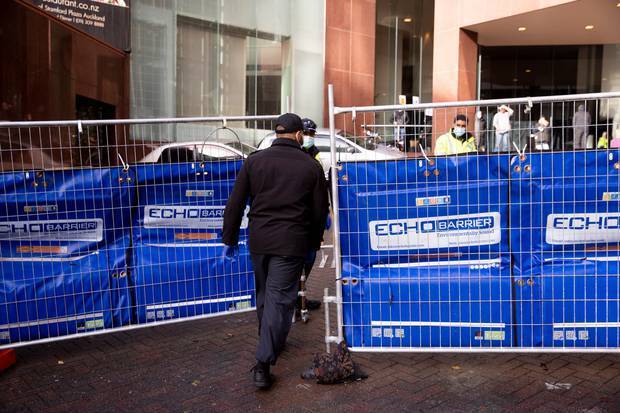 The man escaped from the Stamford Plaza Hotel in Auckland. Photo: NZ Herald
The man who has tested positive for Covid-19 after absconding from isolation to visit a central Auckland supermarket has questioned the evidence around his diagnosis and escape.

The 32-year-old says he feels "totally fine" but "very stressed" about the situation he is in.

The man who arrived from India on July 3 and, as is the rules, went straight into managed isolation at the Stamford Plaza Hotel.

On Tuesday evening he left the hotel without permission, slipping through a gap in the fencing and evading security staff.

He was away for 70 minutes.

Police have established that he spent about 20 minutes at the Countdown in Victoria Street West.

But it is yet to be confirmed by authorities exactly what he did in the 50 minutes before and after he went to the supermarket. The minister in charge of managed isolation and quarantine, Megan Woods, said he stood outside a store to tap into free Wi-Fi and made a 22-minute long phone call.

Police have confirmed he will be charged, and that he will receive a summons to appear in court at a later date.

Security at mandatory quarantine and isolation hotels are being reviewed as a result of the man's actions.

The New Zealand Herald this morning contacted the man, who said he questioned the version of events around his escape and diagnosis, which was released by the Health Minister and police.

The man refused - repeatedly - to say why he left the hotel, what he did during the time he was away and what he thought of his diagnosis and the criminal charge he would face.

The man said he had been given "no evidence" that his Covid-19 test was positive.

When asked why he felt the could leave the hotel, he said several times: "No-one told me anything".

Asked about his health, he said he felt "fine".

He said his reasons for leaving managed isolation were "different from the reasons" given by officials but he refused to elaborate on that despite being asked multiple times.

"I don't know what's going on, I am pretty confused... the police know the facts, I have told them everything, I am complying with them."

Despite claiming he had "no evidence" he was infected with Covid-19 the man said people with the deadly condition were "human".

"We are also people," he said.

He is the second person to abscond from central Auckland hotels this week.

A 43-year-old woman absconded from the Pullman Hotel on foot shortly before 6.20pm on Saturday and was located soon after a couple of blocks away at 8pm on Anzac Avenue.

The five police officers who came into contact with the woman while capturing her must now have Covid-19 tests and will also have to self-isolate.

She is appearing in the Auckland District Court on Monday.

The man refused to speak about whether he felt he had put the public at risk by leaving the hotel before he hung up on the Herald.

Countdown's corporate affairs general manager Kiri Hannifin told RNZ that the man "did a lot of browsing in the health and beauty aisle" while inside the supermarket.

He even stopped and posed for selfies in the aisles, Hannifin said. "He had a phone with him, and he was taking photos with the phone.... Yes selfies, that's right."

Countdown said the man spent 14 minutes in the beauty aisle and six more minutes wandering around the supermarket.

He used a self-service checkout and purchased toothpaste, body wash and razors.

Officials are still piecing together CCTV footage to work out the man's movements between the Countdown supermarket and the hotel.