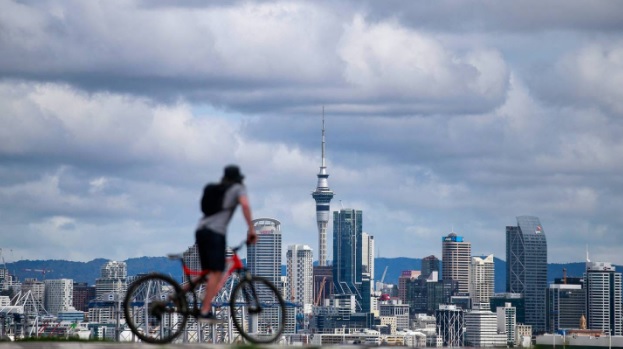 Auckland is currently in level 3. Photo: NZ Herald
A Covid-19 modelling expert says the country is sitting on a "knife edge" and urged Aucklanders not to meet up with friends and family under alert level 3.

The warning comes as Cabinet meets this Monday, one week after the decision to place Auckland into level 3 restrictions for at least two weeks until October 5.

Te Pūnaha Matatini Covid-19 modeller Professor Michael Plank said the number of cases was rumbling along and stubbornly refusing to go away, but there was the odd glimmer of hope, such as the single figure of nine cases in the community on Friday.

"Obviously, the numbers got to 16 [yesterday]. It's really on a knife edge and it could go either way depending on how things pan out at level 3," he said.

"People popping out for a takeaway or whatever it is, provided they wear masks and follow all the procedures that is relatively low risk. It is meeting up with friends and family and people in other bubbles that is the biggest risk," Plank said.

He said the Government's decision to put Auckland under level 3 for two weeks was a reasonable timeframe to get a picture on whether cases are rising again or getting the virus under control.

Epidemiologist Professor Michael Baker said it is too soon to know what level 3 is doing because to be a case you have to be exposed, incubate the disease for a few days, then get symptoms and get tested.

Yesterday's cases, he said, represented what happened a week ago under alert level 4 and Friday's low figure of nine cases did not say anything about alert level 3.

Baker said towards the end of the two-week level 3 lockdown "we will know what is going on and whether it needs to be extended".

He said the pattern of cases in the past week or so suggested some ongoing transmission in the community, and moving to alert level 3 the numbers are expected to rise "maybe quite markedly" in about two weeks.

Baker agreed with the Government's timetable to review the level 3 settings on Monday week.

"This virus is pretty consistent. If you reduce the pressure on it it will start transmitting widely.

"I hope people realise what a valuable prize it is to stamp the virus out. If we don't stamp it out then we will have to move to a different strategy managing it."

Even with a high vaccination rate, there would still be hundreds of thousands of unvaccinated people in Auckland, enough to sustain very vigorous transmission of the virus. It will put people in hospital and kill people, he said.

"It will also mean trying to keep a lid on it so we don't overwhelm health services in Auckland, Auckland could be at alert level 3 till the end of the year potentially," Baker said.

There was no widespread transmission of Covid in Auckland, he said, saying the pattern of the past two weeks is of very low numbers every day.

"But unfortunately, the virus is established now in very marginalised populations who appear to be poor at following the lockdown rules."

He called for an approach to really hone down on the new remaining chains of transmission and have one last big push to stamp it out, which means a high degree of testing.

"We've got that opportunity. It's a huge prize for Auckland and the country if we can get rid of the last case. It is just within our grasp," Baker said.

A spokeswoman for Covid-19 Minister Chris Hipkins said the level 3 and 2 alert settings would be reviewed on Monday, October 4.

The Cabinet is meeting on Monday when the daily press conferences will resume. A Government spokeswoman said, "we don't comment on upcoming Cabinet meetings".

The Ministry of Health will release today's Covid-19 numbers in a statement.