3 Comments
Record-keeping including scanning with the NZ COVID Tracer app or manually signing in will now be mandatory for most events or businesses at all alert levels, the Government says.

The country was put in Alert Level 4 lockdown on Tuesday, August 17 after a man in Auckland tested positive for the highly infectious Delta variant.

There are 21 new Covid community cases linked to the Delta outbreak to report today. Five people are in hospital, but none are in intensive care. There are also three new cases in managed isolation also today.

The total number of cases in the current outbreak is now 72, with the majority pf cases in Auckland and six in Wellington. The nationwide lockdown due to last until at least 11.59pm on Tuesday.

Covid Response Minister Chris Hipkins made the announcement on scanning in this afternoon during an update on the Delta outbreak, saying this will enable fast contact tracing.

It will be mandatory to make a record of where you have been, he said.

"Those places where records are already kept and people are already required to sign in, like gyms and some workplaces, won't need to adjust what they are already doing."

There will be a fine for businesses that fail to keep contact tracing records in line with what the Government currently have in place under the Covid-19 Response Act, which constitutes a fine varying between $300 to $1000.

However, Hipkins said Government are reviewing the penalties and any change would require legislation to be put through Parliament. 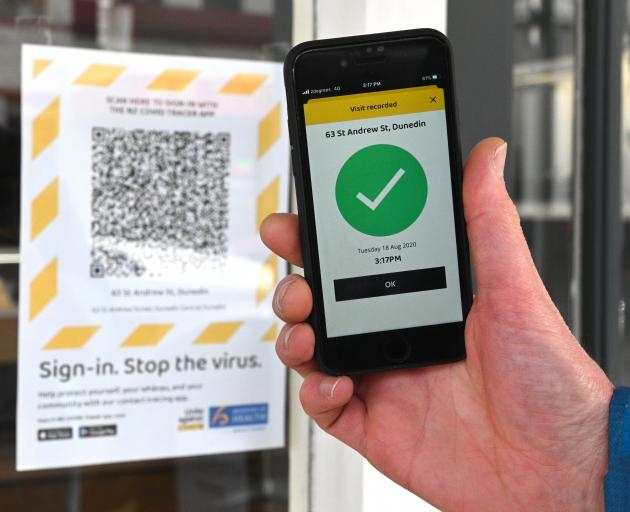 A man uses an app on his phone to scan the Covid-19 tracer QR code at a Dunedin business. Photo: Linda Robertson/ODT
The rate of people scanning in has dropped dramatically from last year's lockdowns.

Mandatory record keeping is currently required at social gatherings including when visiting a marae, at weddings, funerals, tangihanga and faith-based services at level 2.

It will now be a requirement for those businesses and events that are permitted at any alert level.

The obligation will be on the person responsible for the place or gathering to ensure people can scan or sign in.

This will become effective seven days after any change in alert level settings that might allow more businesses to open or gatherings to go ahead.

Hipkins would not reveal when Kiwis could expect to come out of Alert Level 4, though suggested different restrictions could be applied to different regions. Cabinet is due to meet tomorrow to decide on alert levels.

"We will give people plenty of notice. There's still more information to gather."

Hipkins said mandatory QR code scanning was going to be announced last Wednesday, but that was taken over by the lockdown.

The Government considered privacy and other considerations, the minister said. He clarified the mandatory part was to keep a record, and one way to do that was to use the NZ COVID Tracer app.

"We want to give businesses a bit of time to adjust...we do acknowledge it is an extra imposition on business - but a lot less than higher alert levels."

Hospitality and businesses were largely supportive, he said.

Hipkins said yesterday a new record for a weekend day of vaccination was set, and more than 1 million people had now had a jab. Some  52,106 doses of the Covid vaccine were administered and 102,000 new bookings for a jab were made.

Seventy-three percent of people aged over 40 had either had at least one dose or were booked to get one.

More doses of the Pfizer vaccine had arrived yesterday, allowing vaccinations to scale-up with no worries about supply, he said.

Most new cases in Auckland

Director-General of Health Dr Ashley Bloomfield said of the new cases, 20 were in Auckland and one in Wellington. All were being transferred to managed isolation.

Sixty-one of the cases were confirmed as part of the same cluster, with the other 11 under investigation but with likely links.

Bloomfield said some of the 11 cases not formally linked to the cluster were University of Auckland students.

ESR is running whole-genome sequencing, and those matched to the cluster are all "largely identical", he said.

Contacts have increased significantly. As of 9am today, more than 8000 people have been formally identified, and this would increase. Most are considered close contacts. Some  4124 have been followed up and are isolating, with a third already returning a test.

Wellington and Auckland airport domestic terminals are now locations of interest, as is the University of Auckland's Engineering Building City Campus.

Bloomfield said several of the new cases are linked to a service at the Samoan Assembly of God church in Māngere last Sunday. This was emerging as a cluster within the outbreak, he said. People who attended are being asked to call Healthline for advice on testing.

He said the service was one of a number of large gatherings, including schools. It was a priority for contact tracers.

In Auckland,  Sky TV and Sky City casino are working to identify close contacts after they each had a worker test positive yesterday. A Fisher & Paykel worker has also tested positive. The person worked nights in the East Tamaki facility and is now in managed isolation.

A drive-through mass-vaccination centre is open today in Auckland. The centre, set up at the park and ride site at Auckland Airport, will be open for a week and is expected to immunise 2000 people a day.

Good. Another excellent decision.
Now watch all the whiners squeal about "My freedoms!".
Irrespective of anything else, this one act has the greatest potential to stop NZ becoming a covid19 for case like Australia, USA, and in fact most other parts of the world. Simply tracking your movements so the tracing of close contacts and locations of interest can be acted on quickly.

Should have been done ages ago. Really daft not to include supermarkets and need to specifically include churches. Need to ramp up vaccinations; 20% fully vaccinated at this point is pathetic, we should be nearer 80% by now.

Unvaccinated should be prohibited from premises. Goods delivered.