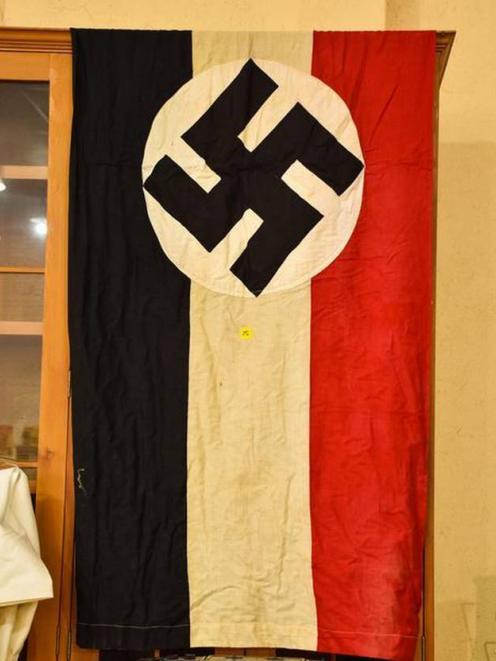 One of the three German flags emblazoned with swastikas. Photo via NZ Herald
A South Island business selling Nazi flags has remained tight-lipped when asked why it was profiting from memorabilia about the infamous regime.

Lipscombe Auction House in Nelson has three flags emblazoned with the Nazi swastika for sale in its showroom.

Each had online auction bids of about $20 to $25 placed on them earlier today.

When contacted, the auction house said it didn't want to comment on the flags.

"Everyone is entitled to their opinion," a staff member said when advised that a reader had contacted The New Zealand Herald, saying they were offended by the flags.

The reader told the Herald they were "very concerned and disturbed" by the damage that could be caused by promoting Nazi memorabilia.

"It is highly relevant within Aotearoa today after the March 15, 2019, terror attacks, and the ideology that fuelled the attacks, which sadly resulted in the tragic deaths of 51 innocent people and the wounding of 40 others," the reader said.

"While it is not against the law in New Zealand, it is deeply offensive to the Jewish community within New Zealand and globally."

New Zealand Jewish Council spokeswoman Juliet Moses said she recognised there was no law banning the sale of Nazi memorabilia, and some people collected the items as a matter of historical interest or record.

But the flags were also offensive to many Kiwis.

"It is highly disturbing for a range of New Zealanders. The Jewish community finds it very disturbing and so do many other Kiwis, some of whom would have lost family members fighting the Nazis," she said.

Moses said the flags would also likely cause hurt to the families of those killed and wounded in the horrific attack on the Christchurch mosques last year.

Lipscombe Auction House gave little description about the flags on its business page.

It is unclear if they are genuine historical flags from Germany or Nazi memorabilia created afterwards.

Moses said while military gear from World War 2 might hold interest to collectors and researchers, it was hard to see the value in Nazi flags.

"These are just flags emblazoned with swastikas - they are simply emblematic of the Nazi regime. It is hard to attach any other significance or value to them," she said.

"Even more so if they are not historical."

Online auction company Trade Me is among companies that have banned most Nazi items from being sold on its website.

"Trade Me does not support any hateful or intolerant ideologies," the company's website states.

"You cannot list items that, either in themselves or by description, promote or glorify racial, sexual, religious or other intolerance, hatred or violence, or that promote organisations with such views," it said.

That included historical or reproduced Nazi uniforms, weapons, war medals or items once owned by Adolf Hitler and other leading Nazis.

The website introduced strict guidelines and regulations after a Nelson man tried to sell his amputated leg in 2006.

The listing was placed on 81 New Zealanders' watchlists before removal.