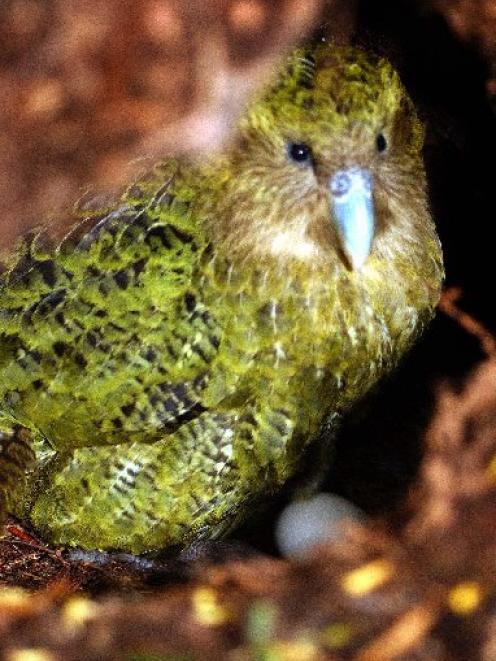 These were the first eggs laid by kakapo in three years, and it was ‘‘hugely exciting'' that two 6-year old kakapo have laid eggs, because it was previously thought the minimum breeding age was 9 years, Conservation Minister Steve Chadwick said.

‘‘This discovery is a great surprise for the Department of Conservation's kakapo recovery team, and although the eggs might not be fertile, it is big news that these birds could lay eggs at all.''

There were only 86 kakapo remaining in two protected offshore islands and they were extremely slow breeders.

The recovery team also confirmed that two eggs laid elsewhere on Codfish Island, by a kakapo that had bred previously, were fertile.

Kakapo recovery team leader Emma Neill said it was ‘‘really exciting'' for the team especially as it had been predicting a good breeding season since April last year when it was judged the seed setting in rimu trees was high.

The fruit of the rimu was the kakapo's main food source for its chicks and if there was not much fruit around, kakapo did not breed, she said.

The female kakapo incubated the eggs for 36 days.

In the last breeding season in 2005, the fertility rate was just 58% so the recovery team would be making every effort to successfully hatch the batch of eggs.

To give these chicks the best chance of survival, volunteers would be keeping a nightly vigil at their nests, making sure the female incubated the eggs properly and using heat pads to make sure they did not go cold.

The breeding happened independent of the artificial insemination programme running on the islands.

The kakapo recovery programme is a partnership between the Department of Conservation, the Royal Forest and Bird Protection Society and Rio Tinto Alcan Ltd.