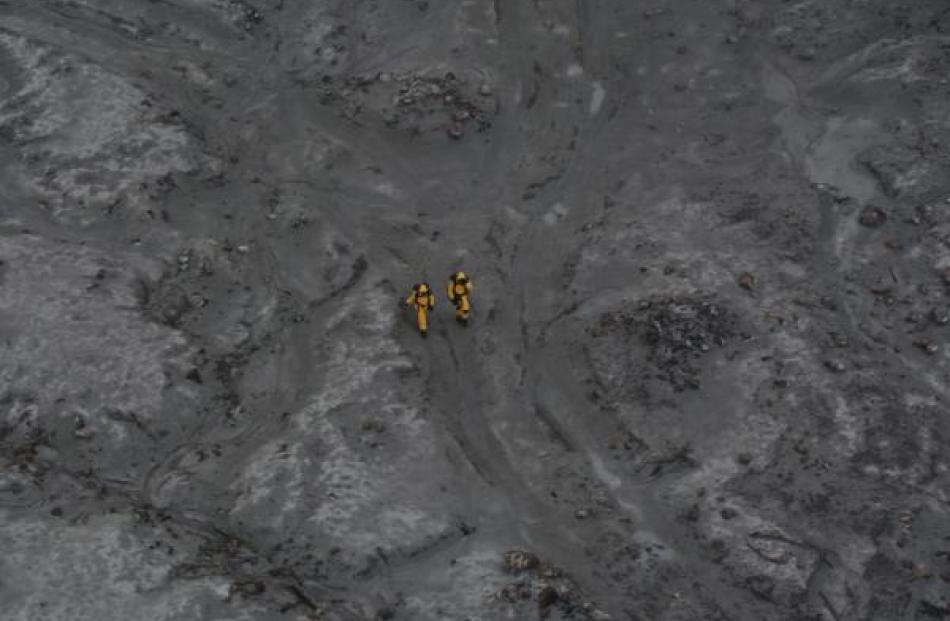 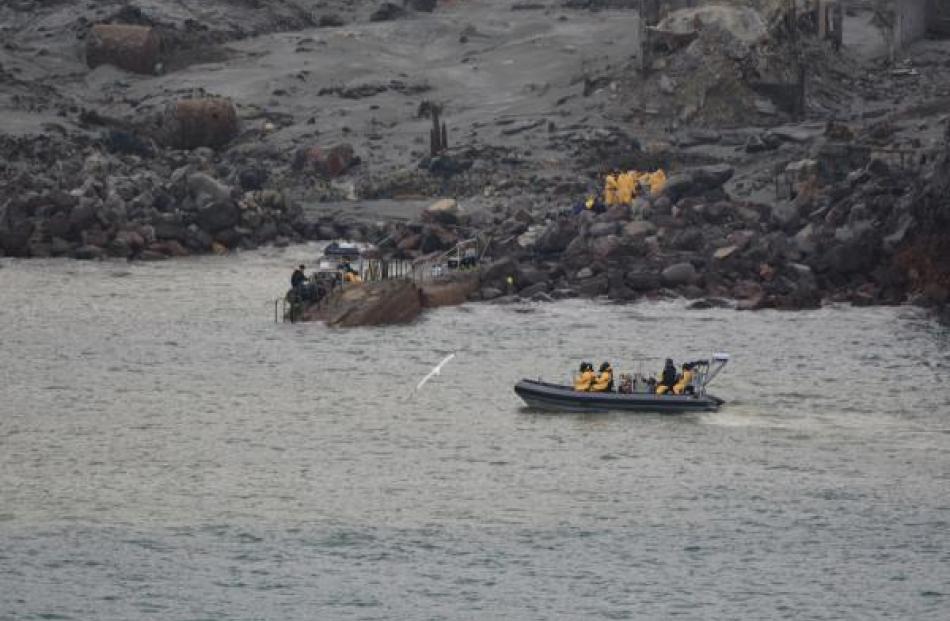 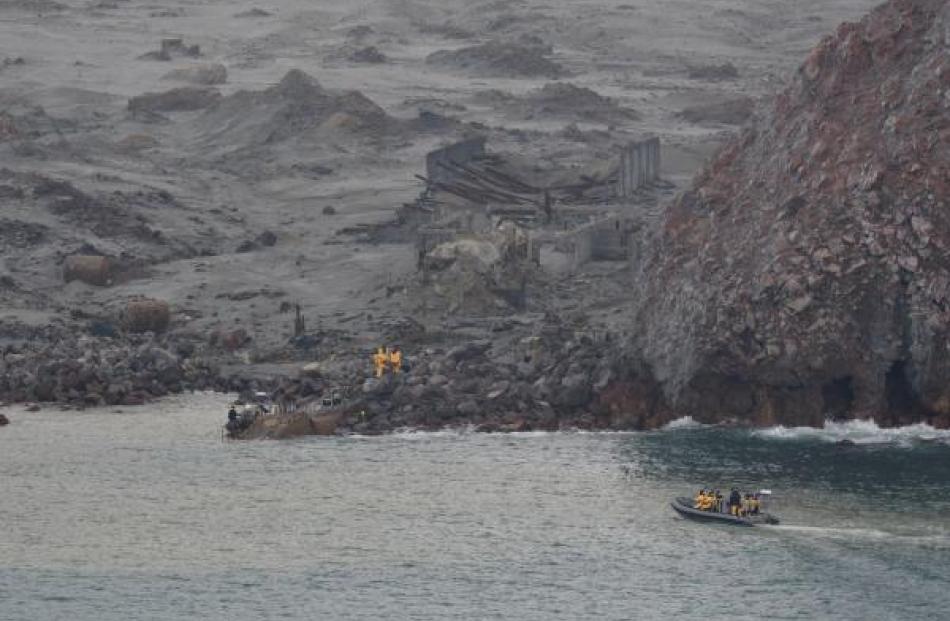 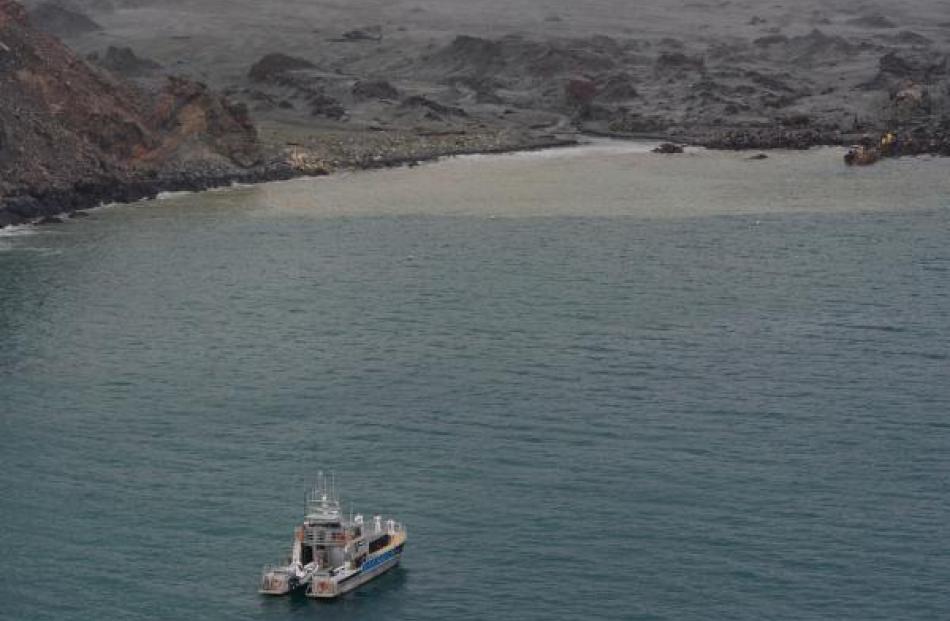 Police launch Deodar in the search area.Photo courtesy of NZDF. 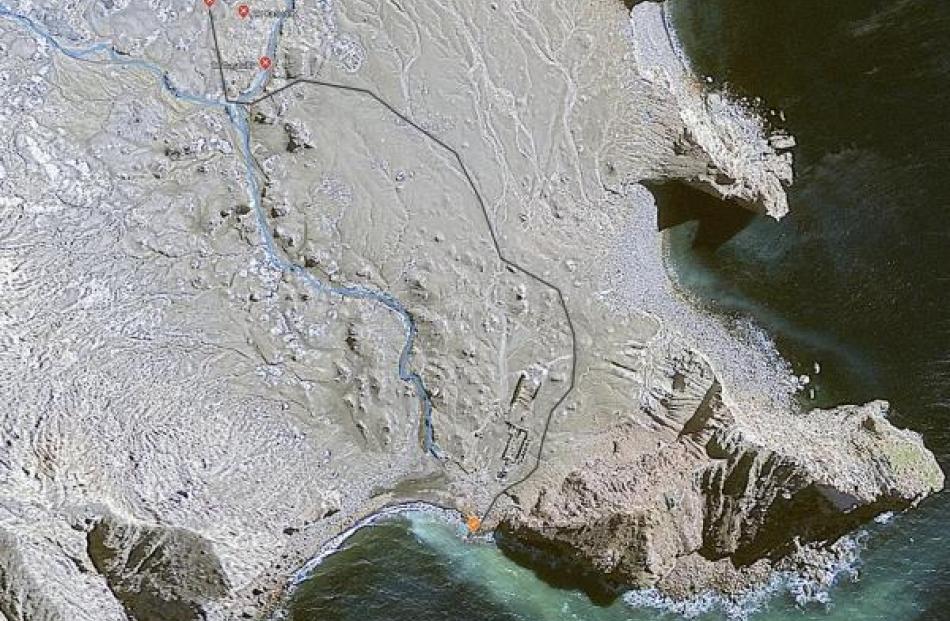 Before the recovery team was sent to Whakaari/White Island it was estimated there was a 6% chance it would erupt during any three hour period.

The recovery team was comprised of members of the New Zealand Defence Force's explosive ordinance disposal squad. A squad of six men and two women had been sent on to the island.

A second team had been on standby.

"The environment that those staff encountered was unpredictable, challenging and those staff showed absolute courage in order to ensure that those six people were returned to their loved ones

The decision to deploy the team reached by Mr Bush and the chief of defence last night.

A NZDF spokesman said the team was on the island for up to four hours. Before they were sent it was estimated there was a 6% chance of an explosion on the island in any three hour period.

Deputy Commissioner John Tims at 11.15am said six bodies had been transported to HMNZS Wellington by helicopter.

He later said recovery team were safe on board HMNZS Wellington and the bodies would shortly be turned to the mainland before being transferred to Auckland. 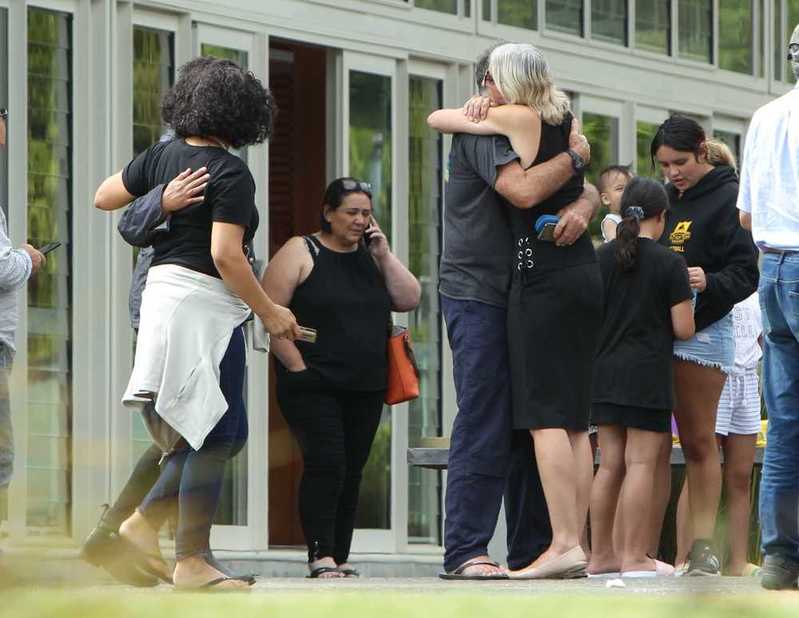 The scene outside Mataatua Marae after news the six bodies had been recovered had been shared with family members. Photo: NZ Herald
"I would like to acknowledge the recovery team for their efforts and the bravery they have shown today.

"I would also like to acknowledge all the agencies involved in the recovery operation and Police and New Zealand Defence Force staff for their dedication and commitment to our response over the last five days.

"To the families and the Whakatane community I understand this has been a tragic and harrowing time and our thoughts and prayers are with you all."

Recovery teams had good knowledge of the location of those six before landing. The whereabouts of the other two was less certain and it was unclear when those bodies would be recovered.

Australian Foreign Minister Marise Payne said New Zealand authorities were hoping to go back for the two remaining bodies as soon as possible.

Asked on Friday if the six bodies that had been lifted off White Island were all Australians, she said: "I think it is difficult to say in advance of the formal process but we know, and we have been advised by authorities, that that is expected to be the case, yes." 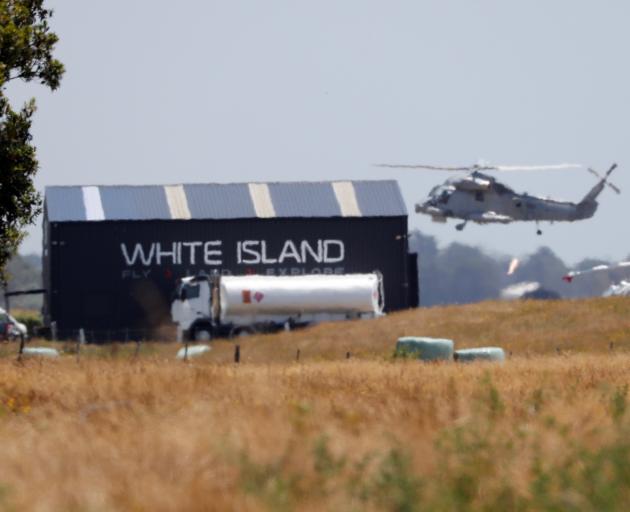 A military helicopter flies at the airport during the rescue mission following the White Island volcano eruptions in Whakatane. Photo: Reuters
Speaking outside Mataatua Marae where families are gathered, Deputy Police Commissioner Wally Haumaha said victims' families burst into applause when they were told six bodies had been recovered.

"These people have been waiting patiently. To hear the news that this recovery mission had gone really well, they're absolutely ecstatic," he said.

"The sighs of relief. The joy. The clapping.

"As you can imagine. They've got their loved ones coming home.

"To be able to take them back to Australia. If that was your son or your daughter, like it was my son or my daughter, what would we be thinking?"

Victims' families and friends have gathered at the marae and could be seen to be visibly relieved, with many hugging each other. 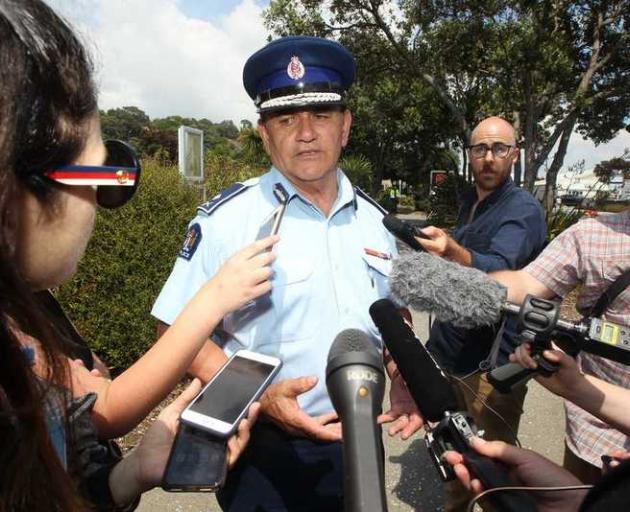 Deputy Police Commissioner Wally Haumaha speaks to media outside Mataatua Marae in Whakatāne. Photo: NZ Herald
Earlier, military personnel worked as quickly as possible after using helicopters to land on White Island, which experts have said still has a 50-60% chance of another eruption over the coming hours.

"It has been an incredibly difficult operation but it has been such a priority," New Zealand Prime Minister Jacinda Ardern told Australian Broadcasting Radio Corp on Friday morning. "We just want to bring loved ones home."

The volcano, a popular tourist destination for day-trippers, erupted on Monday, spewing ash and steam over the island. Among the 47 people on the island at the time were Australian, German, Chinese, British and Malaysian tourists.

The official death toll  still stands at eight, as the bodies on the island have been classified as missing until they are formally identified. More than two dozen more people are in hospitals across New Zealand and Australia, most with severe burn injuries.

A blessing was held at sea with the victims' families before the mission was launched. On the shoreline of the town of Whakatane on New Zealand's North Island, which lies some 50 kilometres (31 miles) west of the island, about 100 family and local community members prayed and sang together as they watched helicopters enter and leave the island.

Boz Te Moana, 24 and Michael Mika, 28, travelled from their homes higher up the Whakatane river to stand where the river meets the sea and support families gathered at the marae, a Maori community centre.

Mr Tims said at 10.10am the operation to recover the bodies was progressing and the team was "well advanced with the recovery of the bodies".

"We expect the recovery operation to continue for another couple of hours."

Deputy Commissioner Mike Clement said at 9.20am the operation to recover the bodies this morning was going to plan.

The operation took more time than expected, due to the protective equipment the recovery team is wearing which could be restrictive and heavy but is necessary.

Conditions for the operation were good in regard to the weather, sea state and the environment on the island.

The eruption happened at 2.11pm on Monday, sending ash 3.6km into the air.

The recovery team on a Defence Force helicopter landed on the island in the Bay of Plenty, police confirmed at 8.25am today.

The operation to recover the bodies of the eight people missing on Whakaari / White Island is expected to get underway soon. pic.twitter.com/kQjxahDTe2

Authorities earlier faced growing pressure from families of victims and the wider local community to recover the bodies as soon as possible.  Police had previously refused to go in due to safety risks. 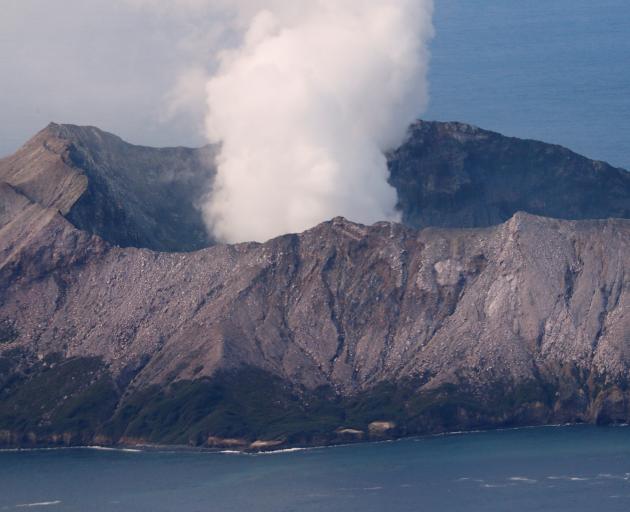 The Whakaari/ White Island volcano remains volatile. Photo: Reuters
About 50 whanau, friends and members of the local community gathered for a karakia at a cordon at the Whakatane Boat Ramp before this morning's rescue operation. Some told RNZ they were desperate for the bodies of those missing on Whakaari, which is 50km off shore, to be recovered today.

Six bodies could be seen and there would be "very limited" opportunity to search for the other two, Mr Clement said.

The risks were still high - the volcano on White Island was "highly volatile" and could erupt again within days, experts have warned.

Members of the Whakatane community have gathered at the shoreline, waiting for the return of bodies from Whakaari / White Island pic.twitter.com/yYRbEb8TOt

New Zealand's geological science agency GNS Science on Thursday put the risk of a further eruption over the next 24 hours at 50% to 60%.

"My concerns are about the weather, the direction of the wind, the sea state, because they all bring risk, they all add complexity," Commissioner Clement said.

"A lot has to go right for this to work."

Eight people have been officially declared dead, while more than 20 are being treated for severe burns.

The volcano is a popular tourist destination for day-trips and 47 people were on it at the time of the eruption.

Twenty-four of those were from Australia, nine from the United States, five from New Zealand, four from Germany, two each from China and Britain and one from Malaysia.

All praise and respect for the brave rescue team as they knew the high risk involved.
Arohanui....