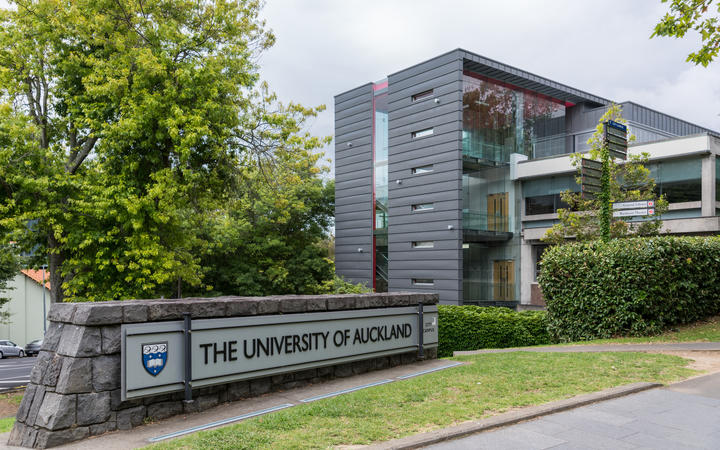 At the University of Auckland 300 people have signed up for a voluntary leaving package. Photo: Claudine van Massenhove via RNZ
Nearly 700 university staff are losing or leaving their jobs because of a financial hole left by falling foreign enrolments.

The eight institutions are missing hundreds of millions in student fees this year because they are expecting no more than 10,000 international students - less than half the normal figure.

Since last year they have been cutting positions and calling for voluntary redundancies or "early leaving" that will run through this year and into the start of next year.

At the University of Auckland 300 people have signed up for a voluntary leaving package, at Victoria University of Wellington 100 have put their hands up for voluntary redundancy, and at each of AUT, Massey and Lincoln more than 70 staff have left or are going.

Only the University of Otago, which limits international students to no more than 15 percent of its total enrolments, has made no cuts at all.

Tertiary Education Union president Tina Smith said the cuts were huge and the most experienced researchers were leaving.

"The senior academics are being pushed out, shoved out, encouraged to leave because they want them to be replaced by cheaper options, but that's not good for the New Zealand students who want to learn," she said.

Smith said the universities were over-reacting because domestic enrolments were growing and the institutions had not lost as much money as they expected.

"Their deficits are down but instead of investing in the quality of education and investing in people they're making ridiculous, short-sighted, poor management-decision cuts and it's wrong, it's really wrong," she said.

Smith said the fact domestic enrolments could not fill the gap left by foreign students showed that government funding for domestic students was inadequate.

Universities New Zealand director Chris Whelan said universities were enrolling more domestic students this year but that increase would not compensate for the loss of foreign students and their fees.

He said universities could end up with as little as one-third of their usual number of foreign students this year.

"Very roughly, universities, about 13-15 percent of their revenue on average comes from international students, and two-thirds of that we're missing at the moment because of border closures so universities have some big financial gaps they need to close," he said.

"So it becomes a real compounding problem and universities need to make changes earlier in order to avoid having to make really big more dramatic changes later."

Whelan said the universities' staff cuts were significant, representing about 3 percent of the sector's total staffing, and it was too early to say if more might be needed.

The largest were at Weltec and Whitireia, which lost more than 40 jobs mostly from the closure of its Auckland campus for foreign students, followed by Wintec which reported a reduction of 30 full-time-equivalent positions, more than half through forced or voluntary redundancy.