All of New Zealand will stay at alert level 4 lockdown until at least midnight Friday and Prime Minister Jacinda Ardern says more time is needed to have confidence the South Island is Covid-19 free with more than 100 contacts isolating on the island.

In an announcement at the Beehive this afternoon Ardern  also said Auckland is staying at level 4 until August 31. It comes after earlier today it was announced there are now 107 Covid cases in NZ, 99 of them in Auckland and 8 in Wellington. This is an increase of 35.

Ahead of the update on Friday the Government was planning for how a region by region lockdown could work.

This would include the rules for essential workers travelling between regions, which included truck drivers.

The Department of the Prime Minister and Cabinet had been working on boundary options to help them decide on those regional splits.

Options included allowing essential workers to travel to a neighbouring region, but not to a third.

In Auckland, Ardern said level four had to be at least a 14-day cycle.

The decision on Auckland's lockdown will be reviewed on Monday.

"Aucklanders will see this data and will know this two weeks is a given."

On the rationale for keeping all of New Zealand at alert level 4 Ardern said there were close contacts scattered throughout New Zealand.

"They are certainly not isolated to one part of New Zealand."

More than 100 known close contacts were in the South Island, she said.

Ardern said Cabinet and the health officials remained confident about getting on top of the virus again.

"We just need to keep it up, ensure we are not in restrictions any longer than we need to be."

She urged people to stay home, other than for essentials and to wear a mask.

"To leave level 4 we need to follow [these rules] closely."

She confirmed Parliament would be suspended for one week.

She said ministers had been asked to appear before select committees this week, which would meet virtually.

She said to people who may be a contact to isolate and get others to do your shopping.

"If you need support, please ask for it."

She also urged people to get vaccinated.

"We are building a picture of the Delta spread."

Ardern said re-testing of all staff at Crowne Plaza and the Jet Park facility had revealed no new clues as to how the virus got into the community.

Ardern said 108,000 tests had been taken in Auckland alone, a good representative sample. She thanked people for their perseverance in being tested.

Waste water testing had returned positive only in Auckland and Wellington.

"With Delta more certainty is needed." 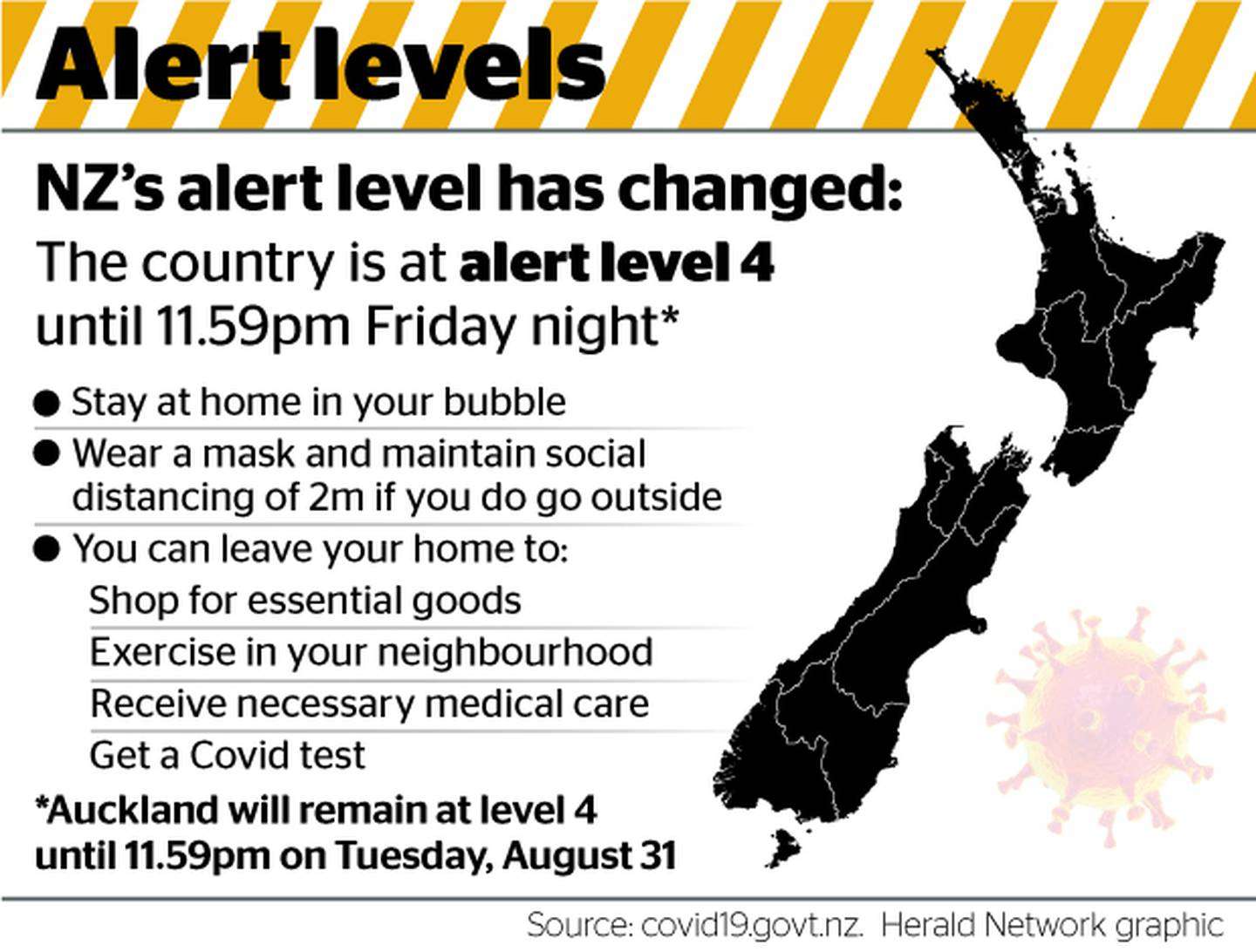 She said the move to immediate lockdown was important because Delta had a headstart on us.

She said on current numbers, each case of Delta had transmitted it to six others. That needed to be less than 1.

More than 13,000 contacts now recorded, but deliberately so.

Ardern said the more cautious approach of Delta meant there were more contacts. That meant there wouldn't be the same certainty of reaching all those who needed to be.

Ardern held up a map of the places contacts had gone to including several in the South Island.

Ardern said there were more than 100 contacts in the South Island, as far as was known.

She said almost 8000 people left Auckland during the 48-hour window to get home after the lockdown was announced.

Any reduction in alert levels would be to level 3.

Director general of health Ashley Bloomfield said the big exposure events they were concerned about were two weeks ago this Saturday, so that fitted with the lockdown until midnight Friday.

Bloomfield said the church event was the largest so far but that was not surprising given it had lasted for hours.

Ardern said the "go hard, go early" strategy last year was similar, and compared with the rest of the world it was short and sharp.

Bloomfield said his advice was for the two decisions that had since been made.

Ardern said more information and certainty was needed on where the contacts of cases had gone.

"But we do believe that is an appropriate check-in point."

She said it also allowed a decent amount of time after the 48-hour travel period following the announcement of lockdown.

Bloomfield said most the emerging cases had a link to existing cases and a number of those today were associated with teh AOG church service.

All of the Wellington cases were linked to others, and all but one had been in isolation throughout.

In Wellington, Bloomfield said the new cases were household contacts of those who had initially tested positive.

Of the University of Auckland student who travelled to Wellington, he said there was a second student but it was unclear whether it was connected to the same location.

The students from the hall of residence were all being followed up.

Ardern said while person-to-person links were not always being made quickly, location links were.

On the investigation into the atrium at the Crowne Plaza, Ardern said had been debate around the exercise area but the person in question had not visited that area. That left the atrium, which was separated from the MIQ.

Officials had located all but two of the people in the atrium at the time.

"We are keeping open the lines of investigation at this time."

That included looking at all movements and footage, and staff.

"But there is nothing to report at this point.'

Bloomfield said all staff had been tested at least once but one, who was being followed up.

Asked why the Crowne Plaza was still open, Ardern said it was not yet established what the issue was, but extra precautions were being looked at while it was investigated.

Bloomfield said the oubreak was "a stretch" on the contact tracing system.

Ardern said the public health authorities were triaging those considered the highest priorities.

On the transTasman bubble, Ardern said she stood by the decisions that were made at the time they were made. But as the virus evolved, so did the response.

Covid-19 modeller Professor Shaun Hendy said it was becoming clear New Zealand is dealing with a cluster reaching towards the upper limit of expectations when it was detected in Auckland nearly a week ago.

"This does mean we will likely see Alert Level 4 held in place for at least several weeks more in the Auckland region," said Hendy, of Te Pūnaha Matatini.

"For the rest of the country we will have to wait until later in the week to see if they remain clear, in which case, an alert level shift could be considered on Friday.

"In Wellington, where there are active cases, officials will need to rule out spread within the community to see consider an alert level shift."

Ardern said the "go hard, go early" strategy last year was similar, and compared with the rest of the world it was short and sharp.

Asked when the elimination strategy would be reviewed, Ardern said the advice of the Skegg group had taken account of Delta. Elimination was the strategy but that would be looked at as vaccination rates rose.

It would depend on expert advice when the roadmap might start, and whether there would be some tolerance for Covid in the community once vaccination rates were high.

On Scott Morrison's target of re-opening borders after the 70-80 per cent vaccination rate target and whether that would affect the bubble, Ardern said that would not happen while New Zealand was still vaccinating.

New locations of interest have been added by the Ministry of Health.

So far 13,230 contacts have been identified with less than half - 6773 - contacted by public health staff and self isolating.

The majority of the 13,230 contacts are close contacts and the number is expected to rise throughout the day as records are fully processed.

This is insane. It's a nation of only 5 million. Yesterday I heard on the RNZ news that only 1 in 5 people have been so far vaccinated. Everybody who wants to be vaccinated should have had the shots by now. Meanwhile the only thing being produced during these lockdowns is government cash. Got a saving account with an NZ bank that has money in it? You're screwed. Bad money drives out good money and there's plenty of that flowing through the economy these days.

Not much left in the tank for the looming housing collapse

You don't understand the urgency, to label public health measures with the epithet 'insane'. Not interested in your spreadsheet influenced guilt until the emergency has passed, which it will do.

The urgency is caused by the insanely slow vaccination rollout. We would not be in lockdown had everyone that wants the vaccine got it, and I'm sure you're not much interested in economic ramifications in general.