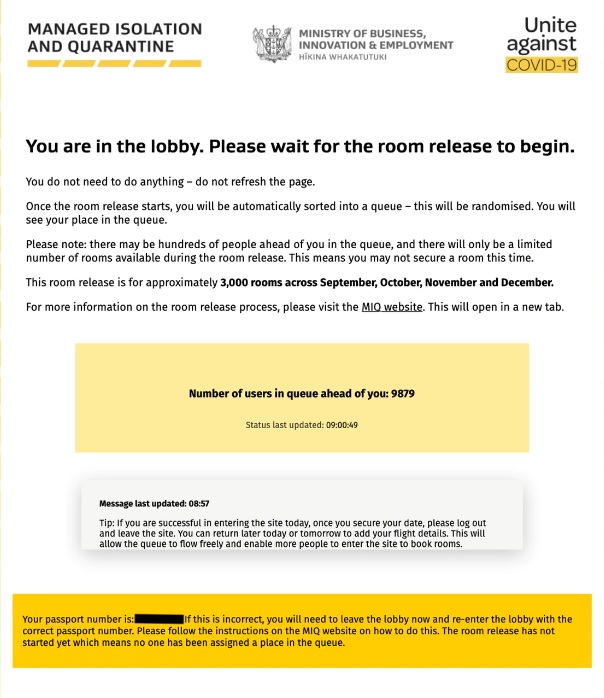 The "virtual lobby" system opened at 8am for people to book from around 3000 new room releases in MIQ across September, October, November and December.

But screenshots taken from Kiwis living overseas using the system for the first time show the number of people waiting in the randomised queue topped 22,000 at just 9.02am - with others reporting they were positioned 24,189 in the line.

One man who stayed up late in London to get in the online queue told the Herald: "This is like some sort of cruel joke."

Wellington telco engineer Jonathan Brewer, who has been stuck in Singapore for months trying to book an MIQ room, told The New Zealand Herald: "This system is designed for selling concert tickets, not for helping people get home. I don't think anyone involved in this project is going to be putting it on their CV. I know I wouldn't."

Brewer said he woke up at 4am local time to get a position in the queue and headed back to sleep two hours later.

Meanwhile, parents who tried to book a spot for their son have posted a video of the process to YouTube, revealing they had logged in to two computers at one time at 8am, and were still positioned behind thousands of people in the line.

The lobby was designed to "make booking more transparent and will create a more level playing field for people trying to access the booking site" because there is no limit on how many people can wait in the lobby.

But it seems authorities under-estimated demand for MIQ spots, with a note to users waiting in the virtual line saying "they may not secure a room this time" because "hundreds" of people may be ahead of them.

Further room release will be announced at least 24 to 48 hours in advance so people will know when to come back, the MIQ website states.

My response: So What?
I don't see this as a worthy news story. The circumstances you're reporting, or rather the NZ Herald is reporting in its usual totally unbalanced way, were entirely predictable.
I do not see it as the responsibility of the NZ taxpayer to fund a service that is capable of allowing all these people to come home for Christmas!