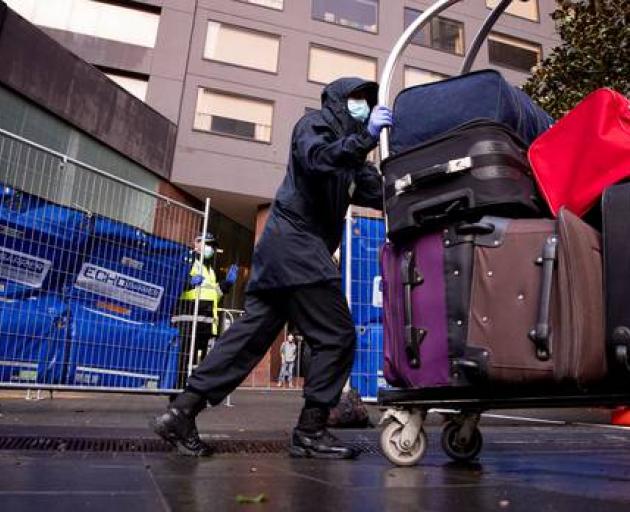 The Stamford Plaza in Auckland is being used a managed isolation facility. Photo: NZ Herald
Another four New Zealanders tested positive to Covid-19 at the weekend, as both main political parties threw their support behind charging returnees in managed isolation.

All four cases detected at the weekend were in managed isolation facilities, the three cases reported yesterday being the highest single-day tally for 10 days.

On Friday, 4475 people were in managed isolation facilities around the country, and with several thousand more New Zealanders expected to make their way home soon, the Government is considering opening facilities in Dunedin.

Keeping so many people housed and fed for at least 14 days is proving expensive, and yesterday National Covid-19 border response spokesman Gerry Brownlee said, if elected, his party would make returnees pay part of the cost of their accommodation.

"Two-week quarantining looks likely to be with us for a while," Mr Brownlee said.

"This is a practical solution to a growing problem."

National’s policy was similar to that of Australia’s Federal Government and several states, he said.

An adult would pay a fixed fee of $3000 with an extra $1000 for another adult sharing their room; children over 3 would pay $500, while younger children would incur no cost.

"There will be exemptions only for New Zealand citizens and permanent residents on compassionate grounds and in cases where they are facing financial hardship," he said.

"As we have made clear on numerous occasions, we are working through policy options on a cost-recovery scheme," Dr Woods said.

"This requires detailed investigation to ensure that any cost recovery system is fair and equitable, and is balanced with the legal rights of New Zealand citizens and permanent residents to come back home."

It was a "complex area" and legal issues had to be canvassed, she said.

It has been 80 days since the last case of possible community transmission of Covid-19 in New Zealand.

Two of yesterday’s cases were detected in Waikato, and the other in Christchurch. The Waikato patients and the family of the second person who tested positive were transferred to an Auckland quarantine facility.

The Christchurch patient was already in quarantine after a family member tested positive.

There are 25 active cases in New Zealand.

No-one in New Zealand is receiving hospital-level care for Covid-19.

Labour don't really want to do border control. It is an anathema to their ideology. Hence they are being dragged kicking and screaming along. Perhaps explains some of the incompetence. Like a child who doesn't want to do their homework.

Honestly, how do you form these opinions with absolutely no facts to back them up?
I've seen absolutely nothing that would suggest that border control is an anathema to Labour's ideology, quite the contrary. You're just making this up to try and stir negative feelings toward them. There is nothing in the article to suggest they are being dragged along, it's just another of your alternative facts. They are clearly applying themselves diligently to the issues. The incompetence arises from bureaucrats working beyond their ability and competency to make the policy work, the policy itself is sound. The pandemic is new territory for everyone, everybody is finding their way and there are bound to be failings. Our Government, very ably lead by Jacinda Ardern is handling the crisis as well as, if not better than nearly every other country in the world. Nay sayers like you condemn yourselves with your blinkered and biased outlook.

What's next — forcing prisoners to pay for their own incarceration?

You'd hope Labour and National could agree on something less small-minded than this.

In answer to your question, why not! Why should the taxpayer pick up the costs of keeping criminals locked up? They do the crime, they should pay for it by doing the time and paying for it. Sounds good to me.
Coming back to the matter of quarantine, Why shouldn't the individual pay for the costs? We live in a free market society. In the pandemic world the cost of travel includes the cost of quarantine. If you want to travel you meet the costs, not me or the community.