No mercy for killer

0 Comments
When the Christchurch mosque terrorist dies in prison he will still not have come close to serving a fair penalty for his atrocities, a judge says.

Yesterday in the High Court at Christchurch, Australian Brenton Harrison Tarrant (29) became the first man in New Zealand’s criminal history to be sentenced to life imprisonment without parole.

Justice Cameron Mander said the case was "exceptional" and no minimum term behind bars could ever be sufficient.

"Your crimes ... are so wicked that even if you are detained until you die, it will not exhaust the requirements of punishment and denunciation," he said.

Tarrant previously pleaded guilty to 51 counts of murder, 40 of attempted murder and one under the Terrorism Suppression Act and spent three days this week listening to nearly 100 of his victims detail their severe trauma.

Dunedin man Mustafa Boztas, who was shot in the leg while worshipping at Al Noor Mosque on March 15 last year, said he was nervous about coming face to face with the gunman again.

But that dissolved as he spoke before the pale and puny figure in the dock.

"When I got there I had a look at him. He's weak, physically and mentally," he said.

If victims were hoping for an explanation or an apology from Tarrant they would have been disappointed.

When asked by the judge whether he wanted to address the court, the defendant said: "no, thank you."

Standby counsel Pip Hall QC said the only instructions he had received from the killer were not to oppose a sentence of life without parole.

The court heard yesterday interviews with Probation, a psychologist and a psychiatrist yielded a string of paradoxical comments from Tarrant.

He showed no emotion when discussing his victims and spoke in a "matter-of-fact manner" about the cold-blooded killing spree.

However, he also called his offending "unnecessary, abhorrent and irrational".

Tarrant said the political and social views he had used to justify the offending were "not real" and that his violence had been driven by feelings of ostracism. 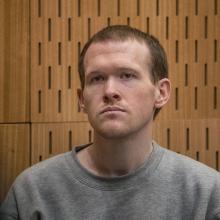 Brenton Tarrant
Incredibly, the murderer claimed he was not a racist while accepting he targeted a specific religion.

When asked about rehabilitation, the defendant said professionals did not have the training or expertise to help him.

If necessary, he said, he could psychoanalyse himself.

Justice Mander said he could put no weight on Tarrant's recent claims that he had denounced the ideology about which he previously felt so passionate.

"As far as I am able to gauge, you are empty of any empathy for your victims," he said.

Since the shooter opted not to defend himself in court, amicus curiae Kerry Cook stepped into that role, providing a contradictory view to the Crown's argument for life behind bars.

He placed emphasis on the defendant's guilty pleas which came in direct contrast to what he had said in his manifesto he would do.

Mr Cook also underscored human rights' reports which said the sentence of life without parole should be "repudiated and condemned" and was "inconsistent with human dignity".

Justice Mander accepted it provided a conundrum for a democratic society but there was an unavoidable rhetorical question: "if not now, then when?"

Tarrant’s actions involved at least 18 months of intense planning, which included a trip from his Dunedin home to Christchurch to fly a drone over Al Noor Mosque to gather intelligence about its exits.

When he stormed the building on the fateful day, he knew exactly where bottlenecks would form and where he could cause maximum destruction.

After an initial spray of bullets, the court heard, Tarrant repeatedly returned to coolly execute those who showed signs of life.

"You committed mass murder. You slaughtered unarmed and defenceless people. You maimed, wounded and crippled many others," the judge said.

"It was brutal and beyond callous — your actions were inhuman. You deliberately killed a 3-year-old infant by shooting him in the head as he clung to the leg of his father. The terror you inflicted in the last few minutes of that small child's life is but one instance of the pitiless cruelty that you exhibited throughout ... You showed no mercy."

Tarrant, however, had failed in his bid to divide the country, Justice Mander said, picking up on a common theme throughout the victims' statements.

However, the unprecedented scale of the massacre and the inconceivable harm it yielded could not be overlooked.

"I consider you to be a highly dangerous criminal who demonstrably has no regard for human life and who represents a very high risk of harm to others," the judge said.

"You are not only a murderer but a terrorist."

Mr Boztas was content with the outcome in court.