One dead in suspected Waikato shooting 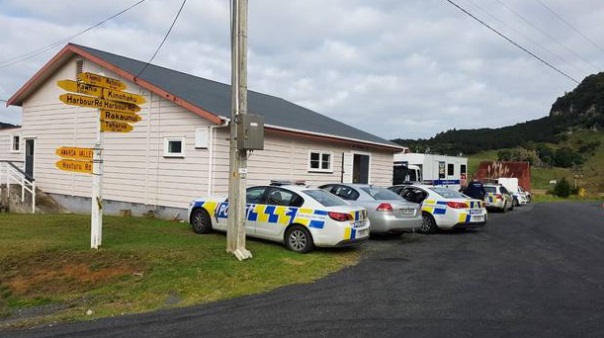 Police have set up their operation in the Hauturu School hall. Photo: NZ Herald
One person is dead after a suspected shooting that left three others injured in the Waikato.

A rural school has been shut and some residents unable to leave after the early morning incident in Kawhia.

Two vehicles appear to now be under investigation as three other people are getting treated for moderate injuries from being shot after an incident that has spanned an area of at least 5km in the isolated area of Hauturu, about 20km south of Kawhia.

Hauturu School staff have this morning called parents of pupils at the school to tell them the school is closing for the day due to an incident there.

Meanwhile, residents of nearby Berntsen Rd are now able to leave their road after it was cordoned off due to the discovery of a vehicle of interest.

An NZME reporter at the scene said the Toyota Hilux was taken away by a tow truck at 10.30am.

Police had since set up a camp opposite the school. There were currently about eight police cars, a trailer as well as their booze bus while a police photographer was taking photos of items of interest, including clothing, on the ground.

Detective Inspector Graham Pitkethley said called to a rural address about 4am today after reports four people were shot.

One person is now dead, while three others are in a moderate condition.

"One person is assisting police with their enquiries and at this stage we are not seeking anyone else in relation to the incident.

"Police are working to understand the circumstances."

A Berntsen Rd resident told the Herald they were unaware of any drama until receiving a phone call from the school earlier this morning.

The resident said they were told the school had to be closed due to an incident occurring there this morning.

The person said people had "turned up at the school and something's gone down".