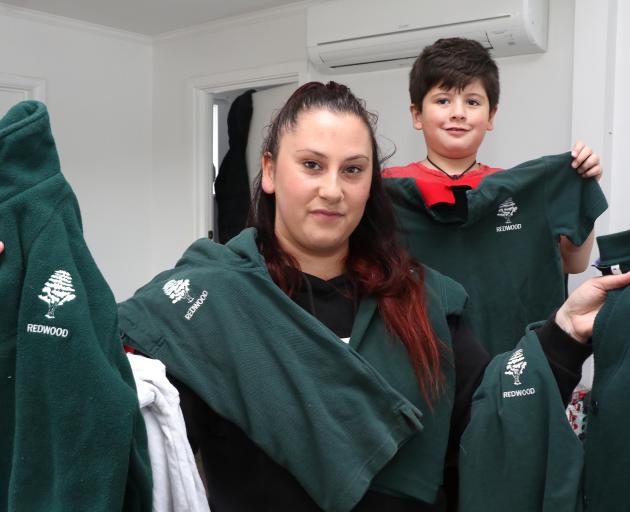 Charnae Pyke and her son Jahlyn, 7, with the uniforms they are giving away. Photo: Star Media
Christchurch mother-of-four Charnae Pyke knows all about the struggle to equip children for the new school year.

This motivated the Sockburn resident to establish ‘Heading back to school pass it forward CHCH’, a Facebook page where uniforms are passed on for free.

“I know how hard it is, especially around this time of year, to be able to afford everything for school,” Pyke said.

Her children had outgrown their uniforms from last year, but they were still in good condition.

This sparked the idea of a space where people could give away unneeded uniforms and school equipment, rather than selling them or throwing them away.

Created last Sunday, the page drew more than 100 followers and several posts within the first 24 hours.

Pyke was shocked but pleased by the response.

“I actually didn’t think it was going to take off, I thought, you know, I’ll see what happens.

“Everyone’s jumping in. Everyone needs items, whether it’s a top or a jersey or a polar fleece or shorts.”

Everything posted on the page was free as it was a tool for people to help each other.

People could also post what they were looking for, and others were able to sponsor them with the donation of a needed item.

Pyke hoped to spare others the stress of shelling out for expensive uniforms.

For example, she estimated her daughter’s high school uniform cost between $400 and $500, and stationary costs were almost another $100.

Uniforms for her children at primary and intermediate school cost just over $200 each.

“That’s just basics, that’s just one item of each [thing], not two or three items to get them through the week.”

She hoped using social media would be an un-intimidating way for struggling parents and caregivers to ask for help.

“I want to be able to give people a place where they’re not judged.”

The page also listed other places people could reach out to, such as the Christchurch City Mission and Salvation Army.

“My ideal outcome is to help as many families as I can.”