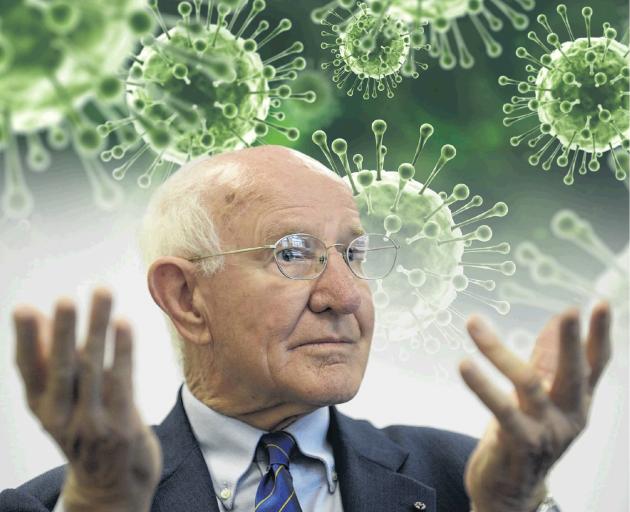 In 2006, the Smithsonian Institute dubbed Balclutha-born Dr Robert Webster the "Flu Hunter" for his significant, decades-long contribution to understanding and fighting influenza. Photo: ODT files
An internationally renowned virologist says New Zealand’s "perfect" response to Covid-19 is let down by the Government’s lack of support for development of a vaccine.

Balclutha-born Dr Robert Webster, who is now based in Memphis, was full of praise for New Zealand’s overall response to Covid-19.

He went as far as saying New Zealand’s response to Covid-19 was “probably the best example" worldwide, but the one part of the response he questioned was the lack of support for vaccine development.

He believed governments around the world where vaccines are being developed and eventually manufactured may prioritise vaccine rollout in their own countries.

That was why it was so important the Government supported vaccine efforts in New Zealand, including at the University of Otago’s Webster Centre for Infectious Diseases, which is named after him.

Dr Webster’s comments come as New Zealand scientists have begun work on a Covid-19 vaccine despite the Government still not having decided if it will approve or fund the work.

Director of the University of Otago’s Webster Centre for Infectious Diseases Associate Prof James Ussher earlier this week called for up to $10million to be pumped into building a national effort to neutralise the virus.

New Zealand had the potential to both develop and manufacture a vaccine, he said.

A frustrated Prof Graham Le Gros, director of Wellington’s Malaghan Institute, accused Government health officials of "sitting on their hands" over whether or not to allow New Zealand scientists to join the race to create a vaccine.

Science Minister Megan Wood said New Zealand had a lot of expertise in vaccine research which could be used in the race to find a Covid-19 vaccine.

"The Government is currently investigating how to ensure research efforts here connect to global research, so there is a co-ordinated strategy on finding a Covid-19 vaccine.

"We’ll have more to say on this in the near future."

At 88, Dr Webster is providing advice to scientists developing Covid-19 vaccines, and was on a call with the United States National Academy of Sciences yesterday where he learnt there were 137 vaccine studies going on around the world.

He was “very optimistic" one or more of the vaccines would be available in 12 months.

However, his great concern was poorer countries and countries where the vaccine is not manufactured and developed would be last in line to receive it.

“I think it would be very shortsighted to rely on outside sources for vaccines.

“You have the expertise — use it."

By helping with the development and manufacture of a vaccine, New Zealand could ensure its citizens had access to any vaccine sooner and help the World Health Organisation with rolling it out to less-developed countries.

Aside from the lack of funding for vaccine development, he praised New Zealand’s response to Covid-19 as “perfect".

“If I had a preference ... to wanting to live somewhere at the moment it would be down in New Zealand."

Probably for the same reason Dr Webster is overseas - NZ governments do not believe in our intellectual scientific capabilities and scientist must leave NZ shores too often.

Overseas in America, that notoriously anti Science country, at present.

How is the USA, the country which went to the moon, perfected nuclear power, has the top research universities in the world, jas produced most of the big names in modern physics, and continues to produce the most advanced technology and medicine in the world... "anti-science". The sort of anti-Americanism at all costs which infests some portions of this nation continues to astound me.