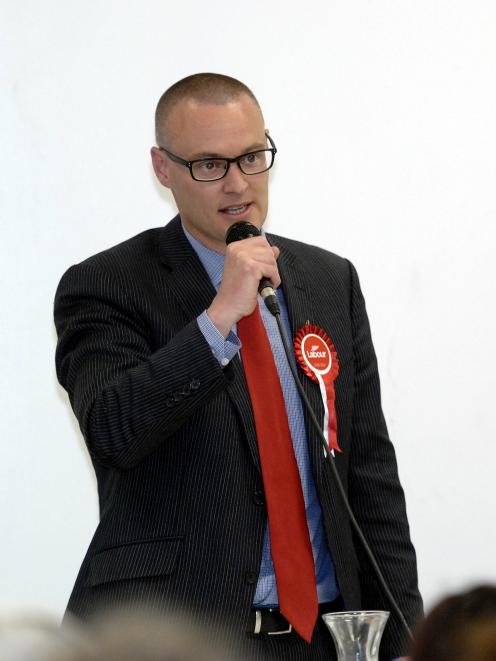 David Clark campaigning in his first election, in 2011.PHOTO: ODT FILES
Dunedin, with its collection of rental properties snapped up annually by students, has long been favoured by investors.

Hence, a few corks were no doubt popped here after Prime Minister Jacinda Ardern's announcement on Wednesday that the proposed capital gains tax now had as much prospect of moving forward as Monty Python's famed Norwegian blue parrot.

Understandably, the main focus has been on the impact of this grim-faced acceptance of political reality on the fortunes of Ms Ardern - and, to a lesser degree, on Finance Minister Grant Robertson.

However, the member of Labour's financial team whose fizz was flattened most may well be Associate Finance Minister and Dunedin North MP David Clark.

Dr Clark has called for a capital gains tax since the start of his political career.

Back in 2011, campaigning in his first election, he said "the capital gains tax Labour is proposing is all about fairness, and Kiwis like fairness.

"Not only does our policy have fairness on its side, but it also will mean most people are better off as a result."

This was not just pre-election rhetoric - Dr Clark advocated a capital gains tax in his maiden speech the following year, and his position seems not to have shifted appreciably since.

This has been painted as a victory for New Zealand First - certainly its local MP, Mark Patterson, will be pleased to see the proposed tax gone, having expressed concern over its possible impact on family farmers.

While navigating around New Zealand First would have been difficult, it would not have been impossible.

More likely, Ms Ardern has looked at the polls, observed public opinion, and stoically opted not to give National a weapon to target Labour with for the next 12 months.

Dr Clark may dream of fairness in the tax system, but this time prime ministerial pragmatism has won - you do not get to change things unless you win the election.

Auckland lawyer Paulo Garcia will become the country's first MP of Philippine descent when sworn in next month.

With a couple of National's senior MPs in their mid-60s, more retirements would come as no surprise.

It was a small but select gathering in Gore on Tuesday when Mark Patterson opened a new electorate office there.

Not uncoincidentally, Shane Jones was in town on Thursday for a provincial growth fund announcement.

Gore may seem an unlikely spot for New Zealand First to prosper, but it racked up 517 party votes there last election and increased its vote on 2014 at three polling places.

It no doubt thinks there are more gains to come.