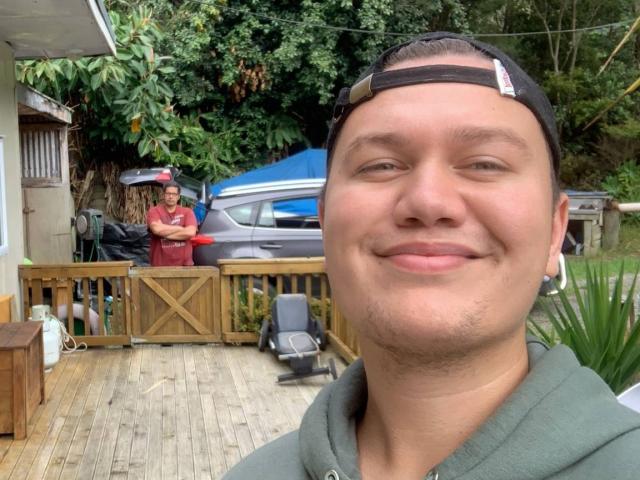 Josh Dent back home in the Bay of Islands as his father, Sam Dent, watches on while living in his car and coming no closer than 10m to his son. Photo: Josh Dent
A Northlander who was infected and recovered from Covid-19 has shared what he went through, including a strange symptom.

Joshua Dent (23) from Bay of Islands told ZM drive hosts Bree and Clint that he was feeling so much better since he recovered from the virus.

He said the virus tracked back to London, where he travelled to see a friend on March 5.

After London, Dent visited Paris before he returned to New Zealand on March 16 after the Government asked Kiwis to return home.

It was not until his last flight that he started to develop symptoms which included a headache.

Then while driving home to the Bay of Islands he got a runny nose, a cough and a sore throat.

"By the time I had gotten home everything started. I had a fever, shortness of breath, achy arms," Dent recalled.

However, he said the symptom that surprised him the most was that he couldn't eat the classic Kiwi condiment — tomato sauce.

"It tasted horrendous," he said to the hosts' amazement.

In response, Clint said: "That thing there might be the one scariest detail that you can give New Zealanders. That might be the thing that will finally make people take this thing more seriously.

"I lost all my Kiwiana at once," Dent replied.

"It made the tomato sauce taste metallic," he added.

"It was this really odd flavour ... and I tried three different brands and they all tasted the same."

After being asked if his taste buds are back, Dent said happily that after he recovered the first thing he ate was a sausage in bread with tomato sauce.

He also awarded Wattie's as his favourite flavour.

Medical experts from several countries have said the loss or partial loss of taste and smell may be an early sign of infection with Covid-19.

Dent said because of his age and being at a low-risk category he ranked the illness as 7 out of 10.

He said that he understood with the symptom of shortness of breath why the elderly and immunocompromised people could have a major issue with the illness.

Dent said anyone who contracted the virus could reach out to him if they felt comfortable.

"I don't want you to be by yourself having to fight this. Just talk to someone that knows what you have gone through. Let's have a laugh, let's build yourself a little community and let's fight this together," he said.

Dent also shared a message to those who may not be taking self-isolation as seriously as they should.

"This is just a big thing and your input can help save lives.

"When [the Government] says stay home, you save lives, they quite literally mean it."

He said you don't want to be the one who carries the virus and spread it to those who are elderly or vulnerable.