By Vaughan Elder
1 Comment
The Southern District Health Board has released a breakdown of where in the South people have tested positive for Covid-19 after the cases in the area climbed to more than 100.

Of the new cases 10 were in the Southern District Health Board area. As of midnight last night 16 people with Covid-19 were in hospital around New Zealand.

This included one patient in Dunedin Hospital, up from none the day before.

The South continues to have the most cases by DHB area, followed by Auckland DHB with 104 and Waitemata with 98. 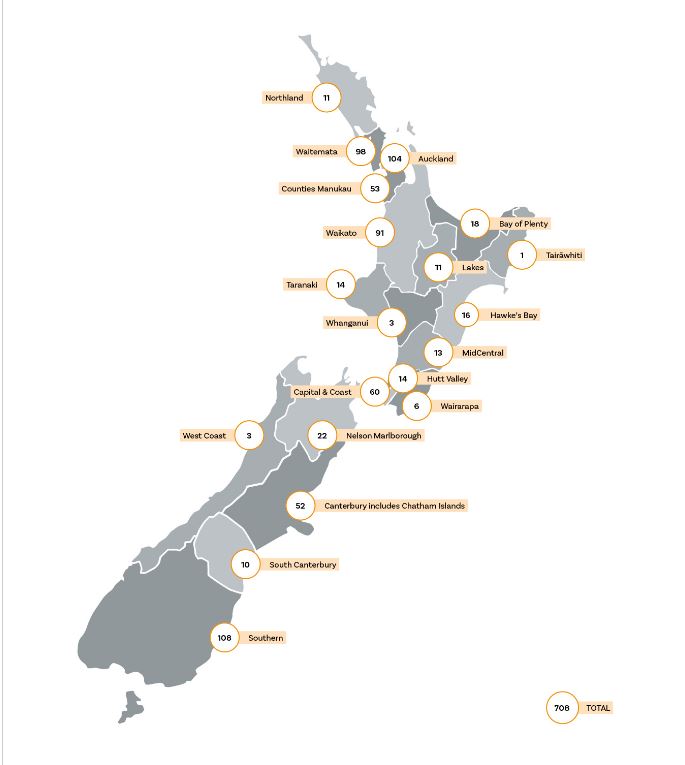 Locations of cases in the South

The Southern District Health Board this afternoon revealed the Covid-19 numbers for different locations in the South, organised by council area.

This was the first time it had updated local information for two days.

Queenstown cases had climbed by seven in two days to 38 and had the most number of cases, followed by Dunedin, which had five new cases and had climbed to 35 and now includes one probable case.

Cases by territorial authority as of today: 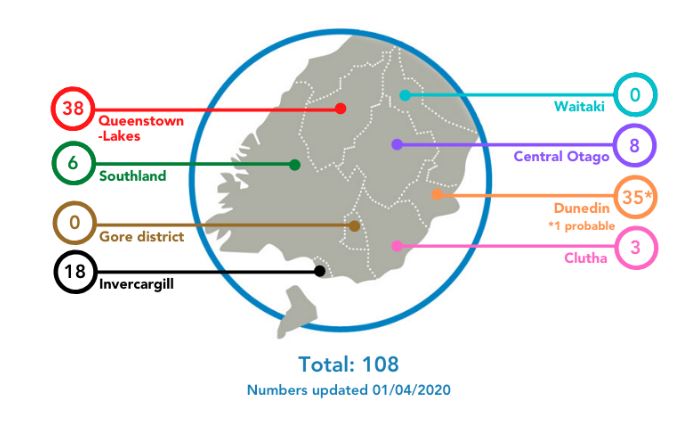 Cases by location as of today

Cases by territorial authority as of March 30: 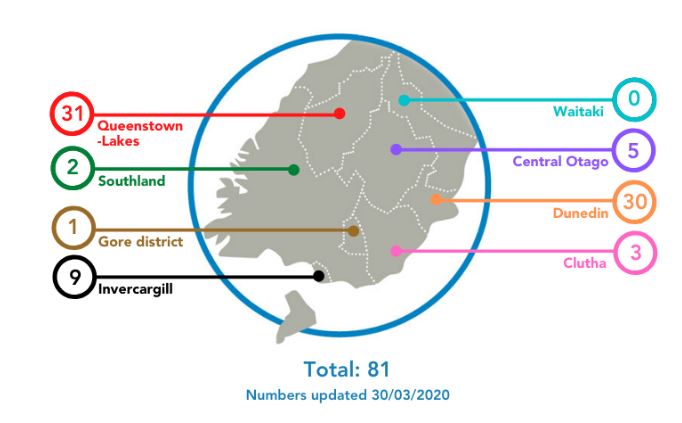 Cases by location on March 30

The number cases linked to the wedding in Bluff has skyrocketed to 22, an increase of 14 from yesterday.

It is unclear how many of the cases linked to the wedding are in the South, but the Otago Daily Times understands the wedding was attended by out-of-towners.

A number of cases continue to be linked to the World Hereford Conference, held in Queesntown from March 9-13.

A second Te Anau Covid-19 case linked to the conference was confirmed his morning by a local doctor.

A Fiordland Medical Practice doctor posted to a community Facebook group to inform locals of the patient's status.

"This case also had direct contact with the World Hereford Conference, and this does not mean that we have community transmission.

"They are recovering well at home, and had already been self-isolating."

The news came almost a week after the first patient was diagnosed in the area.

The doctor advised people could contact the practice if anyone had concerns about their physical or mental health.

The 400 or so conference delegates from 20 countries travelled widely in New Zealand.

Before the four-day conference, some went on a five-day North Island tour which took in Auckland, Rotorua, Napier, Masterton and Wellington, with visits to seven farms specialising in Hereford cattle.

The tour finished in Wellington on March 8.

Then, after the conference, on March 14, some delegates left Queenstown on a five-day tour to Te Anau, Invercargill, Dunedin and Christchurch.

During the tour they visited eight farms in Southland, Otago and Canterbury. The tour ended on March 18.

Some delegates also attended the Wanaka A & P Show held on March 13 and 14.

There have been no new cases of Covid-19 confirmed at Queenstown Lakes District Hospital after two nurses tested positive for Covid-19 earlier this week.<--break

And the hospital's inpatient ward will reopen in a limited capacity with 40 staff able to return to work.

Southern District Health Board chief executive Chris Fleming told media this afternoon that 83 staff at the hospital were tested -- and while 20 test results were outstanding, those results were for staff not considered close contacts and were expected to return negative results.

All of the results were expected to be returned by lunchtime tomorrow.

After the second nurse was found to have been infected yesterday and the blanket testing approach was adopted, only the emergency department remained open in the main building with the maternity ward functioning from another building.

Mr Fleming said that move had already been planned as part of the health board's pandemic planning, but the positive tests for staff had moved the plans ahead rapidly.

When the first staff member tested positive for the infection earlier this week the decision was taken to test all staff present at the hospital 48 hours prior to the Covid-19 symptoms showing.

After the second nurse tested positive, all staff were tested as a precautionary measure.

There have been at least two technical breaches of patient confidentiality, one by the Ministry. Rights are secondary to Community safety.