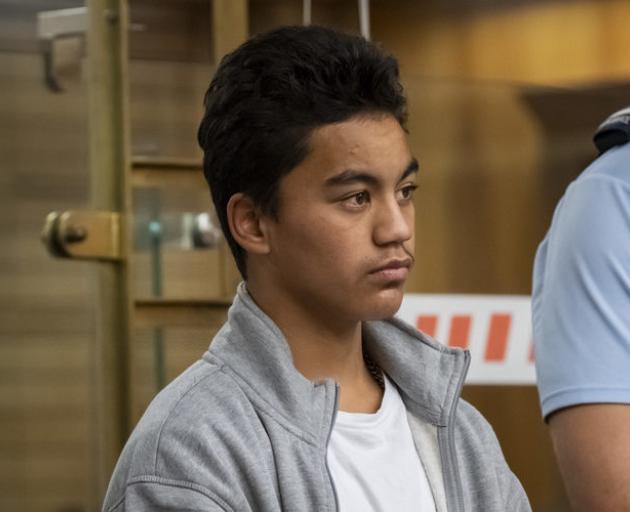 Haami Hanara in the High Court in Napier Photo: Pool photo
A 14-year-old boy accused of fatally stabbing a homeless man has been found guilty of murder.

Haami Hanara was accused of fatally stabbing 40-year-old Kelly Donner, after getting into a fight with him in the Hastings suburb of Flaxmere on March 4 this year.

Hanara had pleaded guilty to one count of burglary, but not guilty to a charge of murder.

He has been on trial since Monday at the High Court in Napier before a jury of seven women and five men, and Justice Churchman.

After deliberating for several hours, the jury found Hanara guilty of murder this afternoon. He was remanded in custody for sentencing on February 5.

In closing statements, the Crown prosecutor told the High Court in Napier that CCTV footage showing the accused holding a knife shortly before the attack, and images of him holding a bloodied knife after the attack, were enough evidence to infer he stabbed Mr Donner.

But the teenager's lawyer argued that 33 seconds of missing footage during which Mr Donner was stabbed was critical as there was no evidence who actually stabbed him.

Crown prosecutor Steve Manning urged the jury to consider the facts and not base their verdict on "emotion".

"We know when Kelly turned to run and turned his back he did not have his carotid artery stabbed at that point.

"We know that when he turned his back to run away, the defendant was right behind him and had a knife in his hand.

"We know that 33 seconds later the defendant comes back into view but this time the knife has blood on it.

"Just on those facts alone you can draw an inference that the defendant stabbed Kelly Donner. That is the sort of logic and reasoning you are entitled to follow in your reasoning.

"They are 33 seconds of uncertainty," he said, because they were not captured on camera.

Mr Forster told the jury that a lot could happen in the 33 seconds not seen on camera.

He also said one of the Crown's witnesses only saw Hanara punch Mr Donner, and two other witnesses gave contradictory or unreliable evidence.