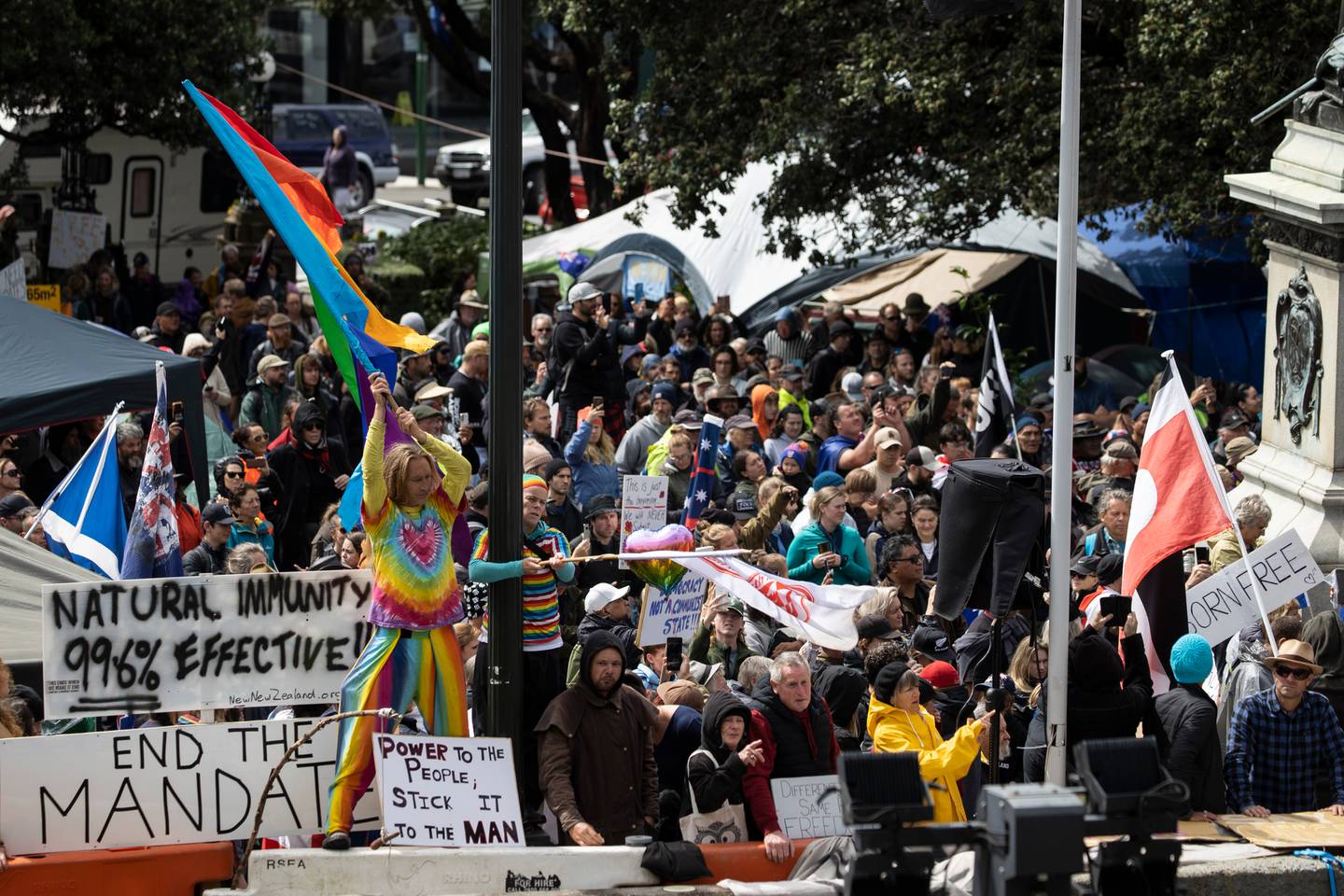 The Parliament occupation drove a surge in social media disinformation and misinformation. Photo: George Heard
The bulk of Facebook disinformation that swirled around the violent climax of summer's Parliament protest stemmed from just a dozen local accounts.

That's according to a major new analysis that's explored how social media activity inflamed tensions that spilled out over three weeks in the capital, causing a "tectonic shift" in New Zealand's disinformation landscape.

A flood of recent Covid-19-related activity has exposed thousands more Kiwis to what the report's authors called "splintered realities", while also helping push people toward racist and violent ideologies.

In their just-released analysis, researchers Kate Hannah, Kayli Taylor and Dr Sanjana Hattotuwa - working under the collaborative Disinformation Project - drew on open-source data covering tens of millions of posts and hundreds of hours of videos and live-streamed footage.

Each shift in New Zealand's Covid-19 response caused ripples across these sites.

As our paediatric vaccine roll-out kicked off, for instance, one post bogusly claiming five children had collapsed at a vaccination centre swiftly went viral.

But the unprecedented surge in online traffic they observed around February's anti-mandate convoy to Wellington, and the 24-day occupation that followed, surprised even them.

Across 140 Telegram channels and chat groups they track, subscriber numbers jumped from 243,341 at the start of the year, to 307,613 by February 11 – a few days after the convoy arrived at Parliament.

By March 4 – two days after a chaotic clash between protesters and police that saw nearly 90 people arrested and 40 officers injured – the subscriber count had climbed to 353,377.

Over on Facebook, February alone brought more followers to mis- and disinformation spaces than the entire six months before, with a similar rate of growth seen on Instagram.

Of all days, however, it was the final stand-off of March 2 that really stood out to the researchers.

Posts on a single Facebook page, run by a known "misinformation super-spreader" they didn't name, drew some of the highest engagement of all public pages in the country over that period. 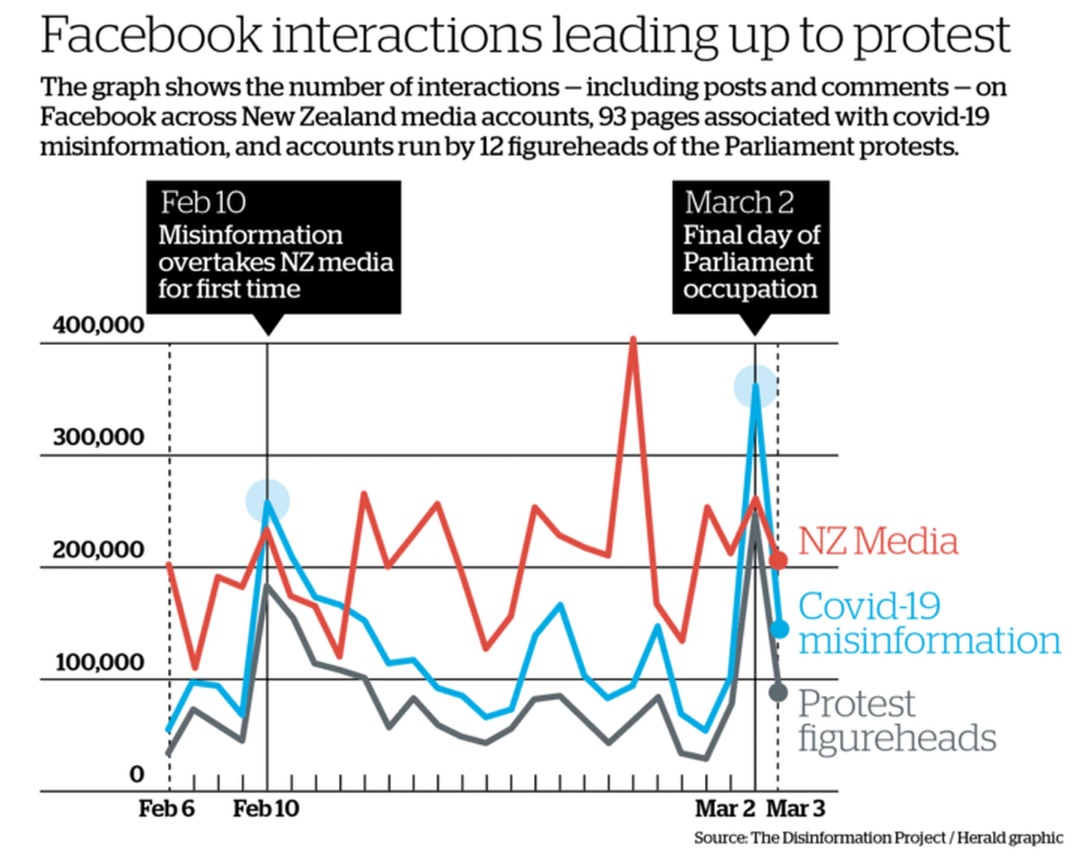 The amount of traffic on Facebook misinformation pages even eclipsed that of pages operated by New Zealand mainstream media outlets combined – receiving 357,089 and 247,620 interactions respectively on March 2.

"The narrative frames, language, and perspectives differed greatly from mis- and disinformation pages to mainstream media pages," the researchers wrote.

"Depending on which ecology they trusted as providing a true and accurate capture of the Parliament Protest, New Zealanders were presented with radically different narratives of the protest, at complete odds with each other."

Yet, more dramatically, on that final day, 73 percent of Facebook interactions over misinformation and disinformation was traced back to just 12 accounts – or what the analysts likened to New Zealand's version of the infamous Disinformation Dozen.

As the Parliament protest came to its riotous end, the researchers noticed international conspiratorialism blend further into chatter among the groups – with false accusations that activists with the anti-fascist group Antifa were behind the fires and violence.

Throughout the protest, there were also threats directed against politicians, journalists, academics, experts and others – and particularly women.

In another troubling trend – and weeks before the invasion of Ukraine began - they observed the sharing of Russia-linked propaganda and disinformation.

Some posts even featured the Ukrainian flag as a symbol for paedophiles, carrying similarities to theories surrounding the Qanon conspiracy movement that's helped drive anti-vaccination sentiment.

The future implications of these recent events were "myriad", Hannah said, and "deeply concerning" for our democracy and sense of social cohesion and inclusion.

"The parliamentary protest exposed more New Zealanders to disinformation and revealed more splintering of reality, to the extent that the mass shooting in Buffalo, which was inspired by the Christchurch mosque terrorist attacks, is widely now discussed within disinformation social media spaces as 'another false flag'."

Of particular concern to her and colleagues was the extreme misogyny and racism they'd monitored - including anti-Māori, Islamophobic and antisemitic sentiment – which were having "chilling effects on participation in public life".

"Information disorders are a very real concern – and in a way, this was never about vaccines or mandates."

Hattotuwa worried that "new foundations" for disinformation had now been laid in New Zealand – with a pivot under way to upcoming elections.

"It's going to be unlike anything that Aotearoa has seen before, in terms of our engagement with elections – and very different to 2020's."

As Prime Minister Jacinda Ardern told media following the confrontation outside Parliament, New Zealand had a "difficult journey in front of us" to address the underlying cause of it.

Last night, her chief science adviser Professor Dame Juliet Gerrard told The New Zealand Herald how the occupation had made the public much more aware of how disinformation was affecting our country.

"We have historically enjoyed high levels of trust in government, and science, in New Zealand, but will need to work hard against a rising global tide to maintain this trust and counter the impacts of what the authors describe as a 'tectonic shift' in mis, dis, and malinformation," she said.

"New Zealand needs to play its part in the global effort to foster social cohesion and to empower our children to learn skills which make the next generation strong critical thinkers who are as resilient as possible to an increasingly polluted online environment."