There have been 10 new cases of Covid-19, all in managed isolation, reported in New Zealand over the past two days.

In the first update since Friday, the Ministry of Health said in a statement there were now 82 active cases.

One of the new cases reported today was someone who had completed isolation and returned two negative test results in September.

"The person was recently retested as a pre-travel requirement and returned a weak positive indicative of an historical infection," the ministry said. 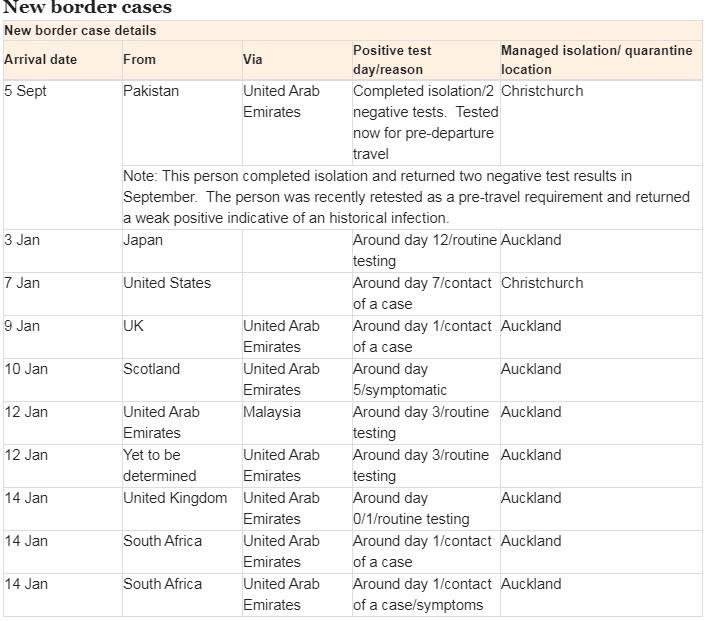 From Ministry of Health
Today's other new cases came from Japan, the US, the United Kingdom, the United Arab Emirates and South Africa.

The total number of confirmed cases in New Zealand is now 1900.

There were new imported cases reported on Friday.

The Ministry also said the first travellers from the UK and US under the new requirements for pre-departure testing had arrived into New Zealand this weekend, and Customs was reporting "very high" levels of compliance.

"The Ministry recognises the extra effort required to comply and thanks these individuals very much for their contribution to helping keep New Zealand's borders safe.

"Pre-departure testing will soon be expanded to include all countries excluding Australia, Antarctica and some Pacific Island nations. These additional requirements have been put in place to further strengthen our border, to protect New Zealand from Covid-19 and new emerging variants."

The next update from the Health Ministry will be released tomorrow.