1 Comment
New Zealand's tourism sector is not dead - but it is in a "deep slumber", MPs have been told.

Industry leaders from the restaurant, tourism and farming sectors are briefing MPs today on the impact Covid-19 and the lockdown is having on their industries.

They are appearing before Parliament's Epidemic Response Committee, which is chaired by National leader Simon Bridges.

Tourism Industry Association chief executive Chris Roberts told the committee that the industry was currently in a "deep slumber" and had been forced to go into "hibernation".

The Government's wage subsidy scheme was welcomed by tourists operators - but up to 100,000 jobs could still disappear, he said.

Earlier today the MPs were told that thousands of business have been damaged - "many of them mortally" - by the Covid-19 pandemic and nationwide lockdown.

However "winter is coming," she said, speaking both literally and figuratively.

After the global financial crisis, the price of beef and lamb had nearly halved.

Milne is expecting the same thing to happen again after Covid-19 has subsided.

The price of milk powder, which is at around $7 a kilogram at the moment, is forecast to drop to around $5 a kilogram.

Milne also said New Zealand should be careful not to get into subsidising of the agricultural sector, as that would be more damaging for the long term. 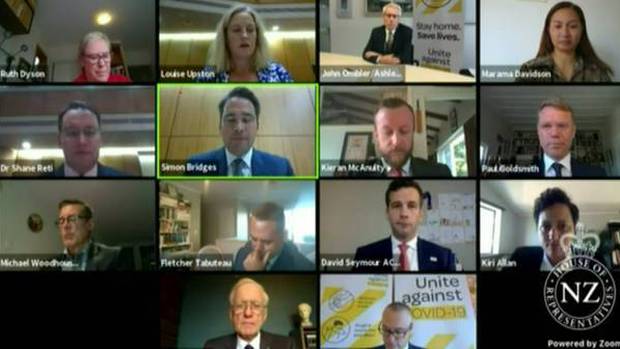 Former Business NZ chief executive Phil O'Reilly told the committee today that thousands of businesses were being damaged by the crisis.

The former head of New Zealand's larger business lobby group is calling on the Government to have a "rethink" about its essential workers policy.

O'Reilly is also calling for the Government to expand the wage subsidy scheme and to provide small businesses with an "urgent" cash flow injection to keep them afloat.

"The engine of our economy is small business," he told MPs.

"It's important to realise how wide and deep this shock is, and will be," he said.

Thousands of businesses have been damaged by the pandemic response – "many of them mortally".

O'Reilly says the wage subsidy has been good for small businesses, but it has been confusing for many too.

He said the Government should further explain the scheme and make it more generous.

"We need to think about how we retain employment," he said.

If a business can show they can demonstrate social distancing while they are operating, they should be allowed to open, he said.

O'Reilly called for cash flow assistance for businesses who are struggling.

"The biggest killer of SMEs now and any other time, is cash flow."

In Australia, he said, the Government is providing many businesses with an up to $20,000 cash flow injection.

"We should urgently do something similar."

But during that time, meat exporters were able to bolster markets such as the US and Australian.

China has since come back on stream, he said.

"The underlying demand for meat protein there is strong."

But the lockdown has still had big impacts on the meat industry.

Overall, the loss in productivity for the sector has been "significant".

However, Riche is confident that demand for New Zealand meat around the world remains strong and the sector is well placed to bounce back.

He said he supported comments made by O'Reilly, that businesses should be able to open during level four if it can demonstrate appropriate compliance with health and safety practices.

Mark Cairns, Ports of Tauranga chief executive, who is representing the port companies, said one of the biggest issues for ports was getting empty containers to exporters.

Ports were working with the Government on this issue, he said.

New Zealand exports 65 per cent more containers than it imports.

Cairns said ships have been bringing empty containers into New Zealand to help with this problem.

He added one of the larger shipping companies has threatened to stop coming to New Zealand because the export load has been reduced.

He did not say which company this was.

Port of Tauranga was "holding up, if not ahead" of where it was in the last two months, as they are still exporting kiwifruit and dairy.

But Cairns said there would be cost to the businesses due to the lockdown.

The Government, however, was quite rightly doing "everything it can" to eradicate Covid-19.

Tourism is never going to be the same again. New Zealand is on a path that will see the virus eliminated in a few months but Australia isn't even aiming to do that and the UK and the USA have done such a bad job that it is doubtful they will ever get rid of the virus. So for the next few years it is unlikely that people will be allowed to enter New Zealand without having to undergo a minimum of two weeks of quarantine. Yes Kiwis will be able to travel within New Zealand but they can't afford the jacked up prices in Queenstown and other tourist hot spots.
Look at China, do you really want hundreds of thousands of people from China travelling around the country before we can see that they have open and free media reporting on health problems there? You simply can not trust the current Chinese Government to be honest about such things.
And when you remove China, Australia, the USA and the UK from the tourist market there isn't much left to lose.
Tourism is going back to pre 1980 levels, if not pre 1960 levels, and that is inevitable.
The government can not support this industry until things recover, they may never recover, it has to let it die.