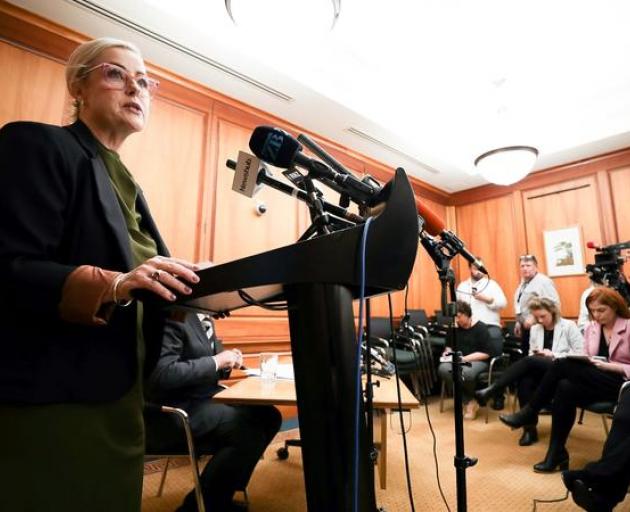 External reviewer Debbie Francis reveals details of her report into bullying at Parliament. Photo: RNZ
There is virtually no part of Parliament that is untouched by a toxic culture, a report has shown.

An external independent review of bullying and harassment at Parliament, ordered by Speaker Trevor Mallard last November, has painted a grim picture of working in the country's heart of democracy.

One respondent told of sleeping with their mobile phone under their pillow in case of an abusive midnight call or text from their MP.

Another said it became a joke in the office of one MP that it was like "battered wife syndrome".

Staff and MPs alike have told similar stories to reviewer Debbie Francis, who received more than 100 written submissions, carried out more than 200 interviews and 42 focus groups from December last year to March this year.

Of the more than 1000 respondents, 29% had experienced some form of bullying or harassment from either an MP or a manager, 30% from peers and 24% from a member of the public.

Some 56% had experienced destructive gossip, 47% demeaning language, 53% a lack of co-operation and support and 41% aggressive behaviour.

Francis said the unique nature of the parliamentary workplace created risk factors for bullying and harassment, including high intensity, a lack of investment in leadership development, unusual and complex employment arrangements, barriers to making complaints and inadequate pastoral care.

Unacceptable conduct was too often tolerated or normalised, the identities of many accused were an open secret and there were alleged serial offenders, and there was perceived low accountability, particularly for MPs who faced few sanctions.

"The changes needed to the culture of the parliamentary workplace are comprehensive and complex. They will require skilled implantation and must be sustained and monitored over a period of years," Francis said.

The report detailed bullying by MPs, between office staff, between MPs, of staff by managers, by the public and by the media.

It also found that staff were reluctant to speak out and that the process was not easily navigated.

Francis found there was a known minority of MPs whose conduct was unacceptable.

"The fundamental problem is the power imbalance. It's a master-servant relationship and they're treated like gods. While they are due our respect, they are not god," one respondent said.

Another said: "Sleeping with my phone always under my pillow in case of a midnight text or call yelling abuse … it was emotionally and physically exhausting."

Others talked about the relationship feeling like it was half-staff, half-spouse and the line was often crossed.

"I had to buy [clothing for the Member]. Then one day we were on a visit. I was carrying a spare [item of clothing] and [the Member] needed it. And then [the Member] yelled at me for not ironing it."

There were examples of bullying and harassment between MPs, including between women.

Five MPs said they had experienced "sledging" in the House that they felt went far beyond what was acceptable in that it was personal and based on appearance or intelligence.

Two described receiving "vicious and personal" text messages from other MPs, in one case one was at 2am.

Six MPs, all female, described cultural or racial slurs from other MPs and alleged that casual racism was prevalent.

The female MPs described confrontations with male colleagues designed to intimidate them and put them down, often through invading their personal space or shouting.

Sexist behaviour was prevalent, Francis found, with 60% of those interviewed saying they had experienced offensive remarks, comments, jokes and gestures that were sexist. Some 35% had experienced the same but of a sexual nature.

The report also said that sexual harassment and sexual violence were likely to be under-reported.

"The MP invaded my personal space and he did this with most women. I don't know if it was intentional or just from habit. He always liked to touch the arm of any woman he was talking to, which was unpleasant, and I had several women complain to me about it," one respondent wrote.

Francis said the Parliamentary policy on bullying and harassment dated from 2016 and was due for review.

While the policy appeared sound and reflected standard practice regarding escalation actions, she suggested it should be slightly updated to better align with response practices as outlined by WorkSafe's Good Practice Guidelines.

Parliament should invest in a range of protective factors that reduced the risks of bullying, harassment and other adverse behaviours.

"This is likely to require significant additional resources and funding."

She recommended explicit investment in the development of a culture of dignity and respect; additional investment in leadership development; better pastoral care; greater investment in strategic workforce management and a shake-up of HR; better health, safety and wellbeing policies, processes, engagement and governance, removal of barriers to disclosure; and ongoing monitoring, evaluation audit of the cultural health of the workplace.

While the Francis review had been planned for some time, it was given renewed impetus following the sexual assault scandal surrounding law firm Russell McVeigh, allegations of bullying behaviour against Botany MP Jami-Lee Ross - who denies acting improperly - and Dame Laura Cox's report into bullying and harassment in the UK's House of Commons

Even though they are elected to 'power' they are still employees of the State and should be subject to the same checks and balances as everybody else. A system needs to be developed where offenders can be identified and dealt with outside of party loyalties where protectionism and ass covering shields them. This is not us!