Trade Me defends selling 'It's okay to be white' items 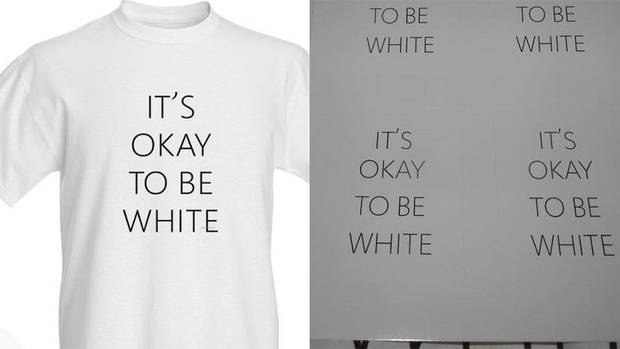 Image: NZ Herald
Trade Me has been slammed for selling "It's okay to be white" stickers and T-shirts, with the Human Rights Commission saying there is no place for it.

Nelson seller vjm_publishing has both stickers and T-shirts for sale, saying the slogan will show buyers are "capable of thinking for yourself".

He describes the products as "Counter-signal the Marxists and other anti-white bigots with these decals, featuring the most successful /pol/ meme of 2017!

"An 'It's okay to be white' T-shirt will let people know that you are not a racist who thinks that a child can be born into sin if others with the same skin colour have acted badly in the past.

The phrase is known to be associated with white supremacist groups around the world, with the slogan originating from website 4chan in a bid to inflame people who identify themselves as left-wing.

The slogan is prominently used by far-right groups including neo-Nazis and white supremacists.

The Human Rights Commission told Newshub there is no place for this type of message in New Zealand.

"Despite what the advertisements say, it seems likely that the stickers and T-shirts are intended to convey a message of intolerance, racism and division. There is no place for that in New Zealand."

Trade Me told Newshub it does not intend to remove the post, and said the listing does not breach its rules and regulations.

It said listings that marginalise individuals or promote one race at the cost of another break the company's rules and believed the listing doesn't cross that line.

The seller has previously been banned from other social media websites.

The seller also suggests on his website that New Zealand should "euthanise all our MPs to prevent further suffering".

In 2017, posters with the words "It's okay to be white" appeared in Napier, leading to fury and frustration from the local council.

Three posters were pasted together on a specially built sign pillar directly opposite the Sound Shell and just a short walk from the Napier i-Site Centre where hundreds of visitors from two visiting cruise ships disembarked.

At the time, Napier Mayor Bill Dalton said: "Sadly, you can't prevent that sort of thing. It's the act of a nutter and it achieves nothing."

Hawke's Bay Tourism general manager Annie Dundas agreed, saying it was "crazy" and unsettling to hear, as so many people did so much to keep the city and the region looking its best.

She said anyone seeing such posters should tear them down, or report them to the council and their staff would deal with them.

"We don't need to see that sort of rubbish."

Deadheads. Stop them when they insist women must go out with them.

I am white and its ok to be white.... What is the big deal in me saying this

What is not ok is saying white is superior.

progress is a better name...