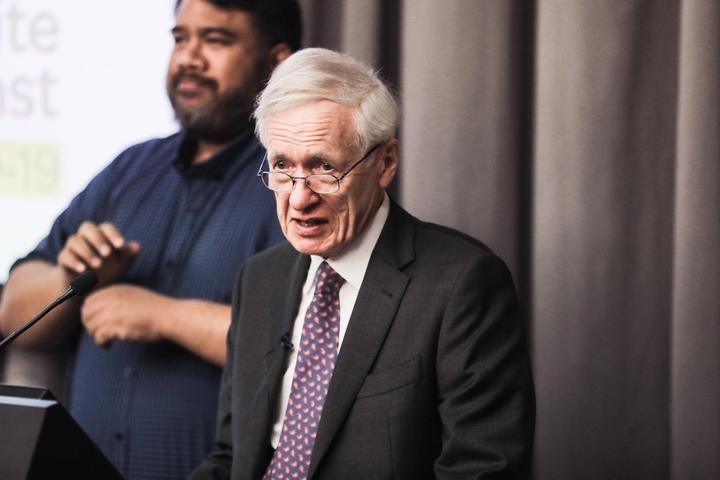 Sir David Skegg. Photo: RNZ
The Delta outbreak has been grim for New Zealand, but the head of the Government's Covid-19 Public Health Advisory Group says it will ultimately speed up our reopening to the world.

It’s also time to realise that the virus will eventually spread across the country, Sir David Skegg says.

Living in the South Island himself, Sir David said the first case there in more than a year should be a wake-up call.

"I get very exasperated hearing people saying, 'Oh, why are we in alert level 2?'

"The South Island is going to have Covid-19. There's no question about that. It's surprising it hasn't spread more widely yet.

"I'm in Queenstown right now and I wouldn't be at all surprised if there's someone with Covid-19 here."

"This virus is going to turn up all over New Zealand. It's not going to be a question if the South Island is pure. We're all going to have to face it."

It may have been overshadowed by the Delta outbreak, but just before it erupted in August Sir David's group released a report recommending how to reopen New Zealand and has continued advising the government.

"Our group was asked to give advice on what the strategy should be for New Zealand after completion of the vaccination programme," he told Nine To Noon.

"We recommended a strategy, we called it Covid minimisation and protection. I was delighted to hear the prime minister announce on Friday that they are adopting that approach.

Sir David said his group had given "quite robust feedback" on the plans, and "I feel that we've ended up with a very good system."

He acknowledged that not everyone was happy with the new system.

"Some people are very upset that we're moving away from the old alert system. But of course that was developed in a great rush about March of last year. That had to change with the advent of vaccination."

"The new system reflects vaccination at every level. I think it is really a step forward."

Sir David said terms like elimination, suppression and mitigation had all been thrown about so often and from so many different perspectives that it was time for a new narrative.

"These terms are used in such different senses that I think they've passed their usefulness. People keep on equating elimination with eradication, with zero Covid, which it's not."

With Auckland cases continuing to grow and predicted to for some time, prevention was the key, he said.

"It's quite clear that outbreak's not going to be stamped out. It can't be done."

"The rest of the country would say we're still following the elimination strategy," Sir David said, but the same methods - testing, contact tracing and public health measures - were actually the same nationwide, he said, with the addition of lockdowns in Auckland and Waikato.

"I really don't think it's a good idea to keep arguing - and of course it becomes a sort of political football - about these epidemiological terms. I think we all know what we need to do, and what we need to do is get on and do it."

Sir David said a big concern with Covid-19's spread was the impact on medical services, and how close they were to being overwhelmed.

"I think we know we're not far from it at any time," he said, noting that primary care could be as affected as hospitals.

"We all know that when people get sick and need treatment ... there's no slack in the system. So if we get a really large outbreak we're going to be in big trouble.

"I find it quite sobering that with what has only been a moderate-sized outbreak in Auckland - I mean it's a small outbreak compared with most of the world - and yet it's our largest hospital centre and they had to fly in people from elsewhere in the country.

"How are we going to cope when we've got outbreaks going on in different parts of the country, say in Invercargill or Palmerston North?”

Sir David expressed disappointment with the preparations for the Delta outbreak, given New Zealand's long stretch of Level 1 freedoms.

Vaccination is still a key, but not the only tool for battling Covid, Sir David Skegg says. Photo: Getty Images
"It is very disappointing that we have been so slow to take up additional testing methods like saliva testing and rapid antigen testing. I wish we had expanded the contact tracing workforce more than we have. ... Compared with most of the world, it's extremely good, but it needs to be better."

Vaccination was still a key, but not the only tool, he said.

"At the end of the day, it all depends on New Zealanders getting around to getting vaccinated. Things are looking very promising."

Echoing Deputy Prime Minister Grant Robertson's comments earlier today, Sir David said he agreed that "Auckland should be at 90 percent before the end of November."

Vaccination certificates would also be important as a way of keeping outbreaks and gatherings under control.

"A lot of people see it as a way of cajoling people into getting vaccinated. I think it's a lot more than that. It's a way of protecting even those of us who have been vaccinated from mass spread of the virus."

Sir David noted that other countries with high vaccination rates were still dealing with large outbreaks, such as Scotland, similar in size to New Zealand's population.

"They've had very high vaccination rates, they've got high natural immunity and yet they've still got right now 900 people in the hospital with Covid-19, about 60 in intensive care units, and they're having about 150 deaths every week.

"Just having people vaccinated is not enough. You've got to stop mass spread of the virus. These vaccine certificates will make sure that the kind of events and occasions where the virus is most likely to be spread will be mainly attended by people who've taken the trouble to have the vaccine."

Mask wearing, staying home when sick, getting tested if showing symptoms and rapid contact tracing would all still be key in the months to come, and could keep New Zealand from seeing the kind of death tolls other countries had.

"These are the sort of things I think that could make New Zealand world leading."

Sir David said that despite the pain of the Delta outbreak, there was a slight silver lining in it playing a part in raising vaccination rates.

"None of us wanted to have this outbreak, and I just feel sad for the people who've become so sick as part of it, and also for all the poor people in Auckland who have been locked down now for such a long period.

"But the one good thing about this outbreak is that most people are now vaccinated which puts us in a stronger position for next year.

"If we hadn't had an outbreak, I have a horrible feeling that just with our national complacency we would still have a very low vaccination coverage."