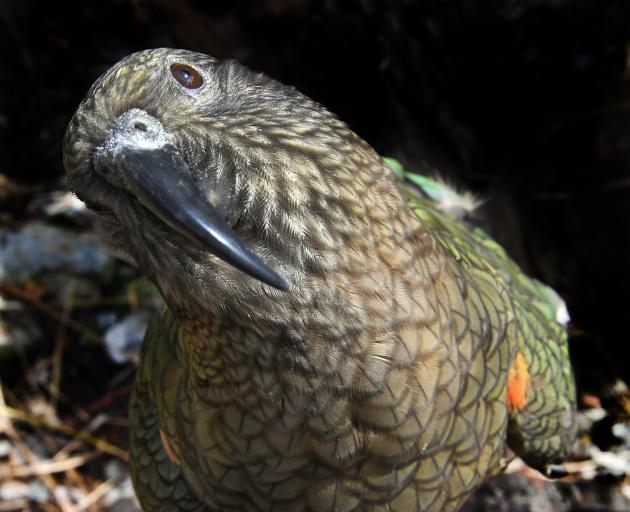 The kea's natural curiosity gets it into trouble. When exploring populated areas the birds can get hit by cars or stuck in man-made objects. Photo: Stephen Jaquiery

New Zealand’s charismatic kea - and 2017‘s Bird of the Year - has just been reclassified to “endangered” by global conservation group BirdLife International.

The alpine parrot was upgraded from “vulnerable” to “endangered” in BirdLife International’s reassessment of the threat status of birds for the International Union for the Conservation of Nature (IUCN).

With an estimated population of between 3000 and 7000, the kea, found in alpine and forested environments of the South Island, is classified as “threatened-nationally endangered” by the Department of Conservation (DoC).

Stoats and cats are known to kill female kea and chicks on the nests. Rats and possums also hassled them in the nest and ate their eggs.

“Every year, 60 percent of kea nests are devastated by introduced mammalian predators such as stoats, a figure that can rise to 99 per cent during an episodic stoat ‘plague',” Birdlife International said.

“However, this technique cannot currently be fully implemented in kea habitat, owing to the risk of some kea eating the poison.”

Forest and Bird chief conservation adviser Kevin Hackwell said monitoring shows why kea were in decline and their reclassification was “a wake-up call to take action”.

“Every year, kea nests are destroyed by introduced predators like rats, stoats, possums, and feral cats.

Following a study that found that only 2% of kea nests were successful, aerial applications of biodegradable 1080 by DoC in 2015 resulted in nest success increasing to 27%.

“However, those kea that are fed by tourists and some locals tend to try novel foods, and sadly, they are particularly susceptible to eating the poison baits used to kill predators.”

“One of our greatest conservation challenges is to stop tourists and others from feeding kea. We can best help kea by never offering them food.”

Like many native birds, the kea frequently falls victim to introduced mammalian predators, and its natural curiosity has also gotten it into trouble. When exploring populated areas the kea could also get hit by cars, or get stuck in man-made objects.

Lead poisoning was another issue for kea, as they often licked and chewed the nails and flashing on older houses and huts.

Kea are also affected by climate change as warming temperatures could limit their habitat range in alpine environments.

Their reclassification came after the IUCN upgraded the Okarito kiwi and the Northern Brown kiwi from endangered to vulnerable, thanks to progress in controlling predators.