One of the Auckland women accused of travelling to Northland without a legitimate travel exemption and later testing positive for Covid-19 has rejected claims she lied, withheld information and tried to avoid authorities.

She has spoken to the New Zealand Herald, wanting to shut down rumours she and her friend are sex workers or connected to gangs and said she had done "nothing wrong" and was "confident" she would not face charges.

The woman is currently in the Jet Park Hotel managed isolation facility.

She will be released next week after spending her mandatory time in quarantine.

On October 8, Northland moved back into alert level 3, after it was revealed an Auckland woman travelling in the area had returned a positive Covid-19 test result. 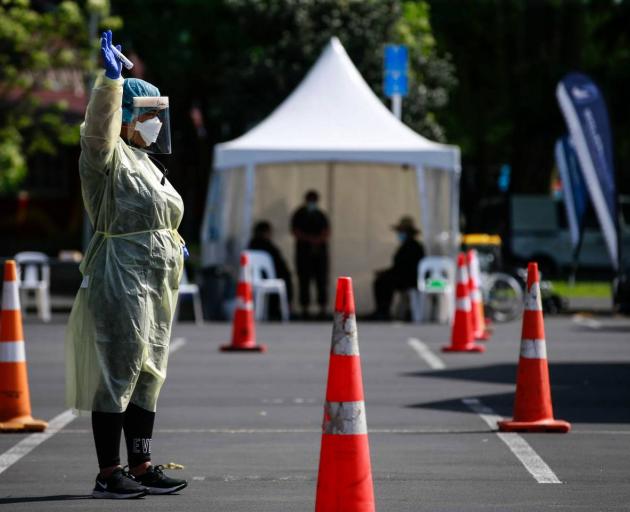 A Covid-19 testing station in Auckland. Photo: NZ Herald
The woman returned to Auckland and was put straight in MIQ but was "refusing to co-operate with officials on her movements".

Days later it was revealed police were hunting for her travel companion.

They said authorities had contacted her but did not know her location.

Speculation grew that the women were prostitutes connected to a gang who were plying their trade in Northland - and that was why they were refusing to tell public health officials where they had been and who they had contact with.

Prime Minister Jacinda Ardern appealed for the second woman to "come forward" and said health officials and police were "really pulling out all the stops" to find the traveller.

"I feel the same frustration that everyone else feels," she said at the time.

"They are refusing to co-operate, it is beyond irresponsible, it is dangerous."

The second woman was located at a New Lynn address hours later and also taken to MIQ.

She told the Herald today that much of the information released about her was not true - nor were the rumours.

Even former deputy prime minister Winston Peters was discussing the case, alleging one of the women was a sex worker who was assisted by Mongrel Mob leader Harry Tam to obtain travel documentation.

Tam denied this and later threatened legal action against Peters.

"If Winston said it, he needs to prove it … If he's not going to apologise, we will need to look at legal action," Tam said.

The woman the Herald spoke to also rejected the claim.

She explained that her friend had started a new business in the building and in-home services space shortly before lockdown and had set up a number of "networking" meetings in Northland in the hopes of getting contracted for work.

"She requested travel exemptions and gave them reasons we were going ... she had me down as an employee or assistant," said her travel companion.

"We had more meetings in Waikato planned for the next week ... I was assisting her."

They were in Whangārei when the business owner received the news her Covid test was positive.

"We made our way back to Auckland," the other woman said.

"My family were waiting to get their vaccinations and I had a friend whose house was not being used so ... I went there."

The woman started to feel unwell and knew - given she had been in a car with a positive case for days - that she had Covid-19.

She didn't want to expose anyone to it, so stayed put and self-isolated at the house in New Lynn.

She claimed she was in daily contact with a public health nurse and was not hiding from authorities.

She believed they knew where she was and what her plan was, and could not understand what the fuss was about.

"I felt it made sense to self-isolate," she said.

"I wasn't hiding, I fully informed them where I was."

The woman told the Herald she knew that people with Covid had to go into MIQ but she had "pretty bad" symptoms and did not want to infect anyone else.

She said she had been co-operating and had given the locations of all five places she and her friend visited in Northland.

"I have been co-operating ... my friend may not have been more forthcoming because ... she felt like she was in trouble."