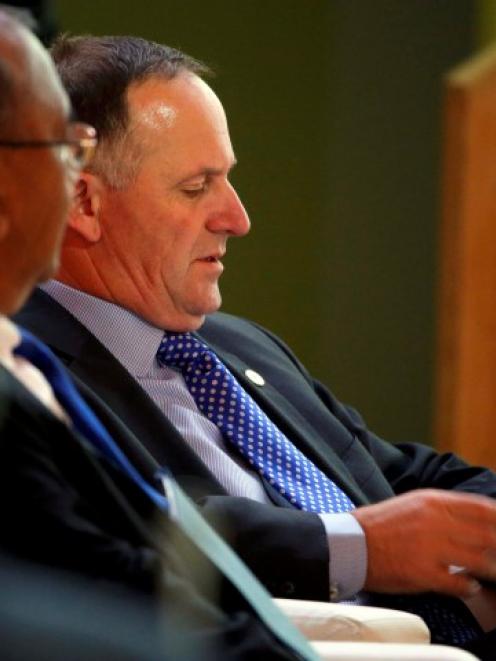 John Key (C) reads a document as he attends the opening session of the World Climate Change Conference 2015. Photo Reuters
John Key's address to the UN Paris Climate Talks, along with our weak emissions targets has won New Zealand the Fossil of the Day Award, the first to be given at the talks.

Fossil of the Day is an award given by Climate Action Network International, a global coalition of environmental NGOs.

"New Zealand being awarded the Fossil of the Day award on the first day of the Paris Climate Talks is a damning indictment of New Zealand's climate policy of inaction," said New Zealand Youth Delegation spokesperson Zoe Lenzie-Smith from Paris.

"Even more galling than New Zealand's inaction is its hypocrisy. The Prime Minister alleged that New Zealand is a leader on fossil fuel subsidy abolition, where in fact New Zealand's fossil fuel production subsidies have increased seven-fold since Key's election in 2008."

The Climate Network was scathing of Key: "Prime Minister John Key showed a degree of hypocrisy by claiming, at a Friends of Fossil Fuel Subsidy Reform event, that New Zealand is a leader on fossil fuel subsidy abolition - despite the country's fossil fuel production subsidies have increasing seven-fold since his election in 2008. His phoney grandstanding came just a week after claiming that New Zealand 'doesn't need to be and shouldn't be a leader in climate change'. Are you getting mixed signals too? Or is it just us?"

New Zealand was joined on the podium by Belgium, its environmental leadership being described as "as murky as a tall glass of weisse beer.

"It's four governments from four different parties are still bickering over how to implement the existing EU climate and energy package from 2009, ensuring they were too busy to even consider doing the work necessary to prepare for the Paris Climate Summit. Way to go Belgium...backwards," said the Climate Network.

It's not the first time New Zealand has taken line honours, having won two fossil awards in 2012 in Qatar.