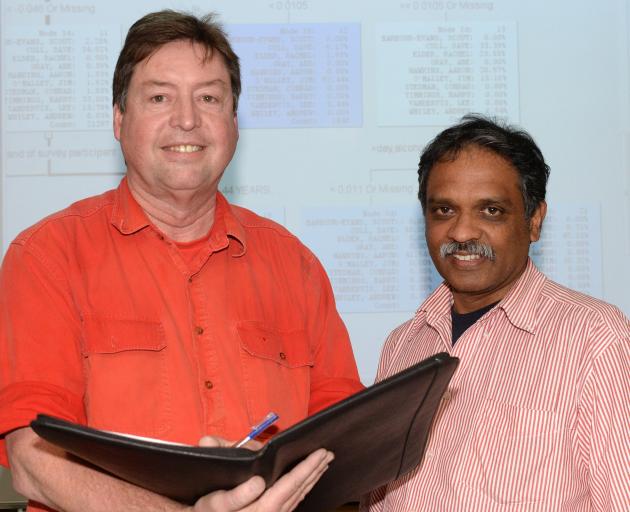 Dr Damien Mather (left) and Dr Mathew Parackal, of the University of Otago’s marketing department.PHOTO: ODT FILES
There are many half-truths and untruths told in politics, the biggest of them all being "I don't pay attention to polls".

This is utter nonsense.

There is only one real way to keep score in politics, that being an election.

But in the interim, politicians of all stripes pay rapt attention to every decimal point offered to them by polling companies.

Be they public or internal polls, formal or informal surveys, anything that tells an MP how they are going vis-a-vis the mob on the other side of the debating chamber is eagerly lapped up, then either lauded as a sign the country has confidence in you or dismissed as being a rogue poll.

In recent years, though, many questions have arisen as to what extent polls can be trusted.

Dunedin South MP Clare Curran saw the last first-hand as a New Zealand Labour Party observer in Melbourne; the fizz at Aussie Labor HQ quickly went flat as the win all polls had predicted for it instead turned out to be a clear majority for the Coalition.

Depending who you believed, either National was miles in front or Labour was streets ahead.

The variance occupied the headlines for some days, but came as little surprise to University of Otago academics Mathew Parackal, Damien Mather and David Holdsworth.

The trio of marketing lecturers have been studying polling for some years, and in 2018 published a paper that proposed a new polling method using open-ended, values-based questions and weighted responses.

They trialled their system before the 2014 New Zealand election and came up with figures not far removed from the actual results, and in the case of the notoriously hard-to-predict Green Party were almost bang on.

One of the issues with polling has always been you are counting people's intentions, as opposed to what they actually do in the privacy of the polling booth.

This works a few different ways.

Hypothetical answers to hypothetical questions always need to be treated with a pinch of salt, and a sound poll took efforts to address that, Dr Mather said.

Methodology is another reason why polls can return disparate results.

One of last weekend's polls used a random sample via mobile telephones, while the other was based on an online panel of willing survey participants.

The phrasing of questions can also be important, as the Otago researchers have found that asking the "leading-edge question" first will greatly influence the way respondents answer later questions.

One of the great cliches of polling, especially from parties who are on the slide, is that the result in question does not coincide with their in-house polling.

Surprisingly, there is some truth to that, as political parties have greater access to email addresses and cellphone numbers and are more likely to be able to develop a genuinely random sample.

The aforementioned Otago academics are looking for funding to expand their research further.

With the 2020 election on the horizon and the established polling firms producing such dissimilar results, they might find renewed interest in their wares from many quarters.

Southern MPs have to travel more than most, but Invercargill Labour list MP Liz Craig was stretching the bounds of credibility this week.

Having jetted back from Canada, where she was attending the Women Deliver conference (an international gathering on gender equality and women's rights), Dr Craig was all set to motor to Lumsden for a Monday meeting on maternity services as soon as she landed before, perhaps mercifully, it was cancelled.

She was back on a plane almost immediately, though, with Parliament resuming sitting on Tuesday.

On Tuesday, Clare Curran found herself unexpectedly deputised into Prime Minister Jacinda Ardern's argument with Simon Bridges about the whys and wherefores of the early release of Budget information.

Back in 2013, Ms Curran was alerted to a security flaw in the Ministry of Justice website, whereby sensitive data could be obtained by anyone with basic computer knowledge.

"When that was brought to Clare Curran's attention, she took it directly to the then minister, Judith Collins, but I just relay that as a form of comparison," Ms Ardern said pointedly.

Sadly, no video footage seems to be online, but reports confirm Clutha Southland MP Hamish Walker managed to make it through the Gore "Stars On Ice" show last Saturday without canning over.

The novice skater was on the ice for just the fifth time as part of the fundraiser, in which he performed a Grease-inspired routine.

The recent polls suggest that at the next election Labour would gain a significant number of extra electorates and list MP's, National would stay about the same, NZ First would be depleted in numbers as would the Greens.