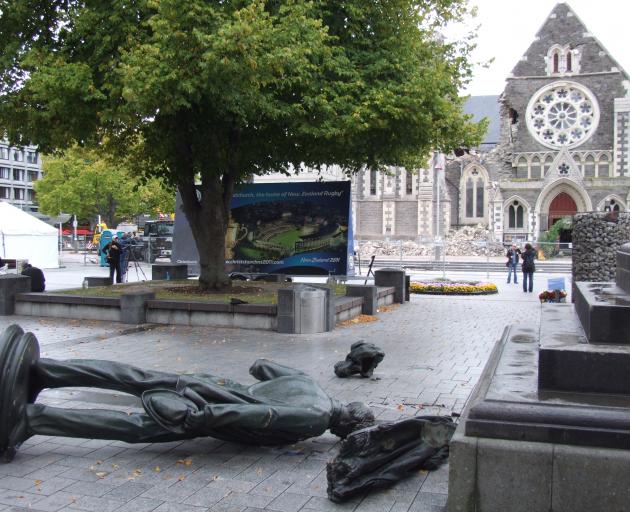 A statue of Christchurch founder John Robert Godley, smashed from its pedestal by the force of the February 22 Canterbury quake. PHOTO: MATTHEW HAGGART
Few will forget the events of September 4, 2010, and no-one will forget February 22 the following year: the Canterbury earthquakes.

Most significantly, of course, there was the appalling loss of life, but the damage was so widespread that more than 700,000 claims were eventually lodged.

New Zealand is unusual in having a universal residential property natural disaster insurance scheme, a backstop few people had given much thought to until the Earthquake Commission was tested to its limits and often found wanting.

Eleven years on, and with the 2013 Seddon earthquake and 2016 Kaikoura quake, which caused serious damage in Marlborough and Wellington offering robust supporting evidence, the Government this week moved to revitalise and reform the EQC system.

That task has fallen to Dunedin Labour MP David Clark, who was handed the normally relatively insignificant responsibility for the EQC in the post-election Cabinet and asked to bring about the reforms suggested by Dame Silvia Cartwright in her inquiry into the aftermath of the Canterbury quakes, as well as changes demanded by those who have wrestled with the EQC system over the past decade.

On Wednesday, Dr Clark introduced the Natural Hazards Insurance Bill to the House, 115 pages of legislation chock-full of all the intricacies you might expect laws governing how people should be compensated in the wake of a major disaster would require.

Although possibly not enough intricacies: both former Ilam MP Gerry Brownlee and current Kaikoura MP Stuart Smith, men who each know a fair amount about quake recovery, suggested in their speeches that there would be extensive debate on various proposed provisions at select committee.

Mr Smith might perhaps have got a bit over-excited by calling for the Bill to be amended to include meteor strikes in its list of hazards. Never say never I suppose, but if a meteor of a size significant enough to invoke natural hazards legislation hit New Zealand, Don’t Look Up has taught us we might have a few more pressing things to worry about. 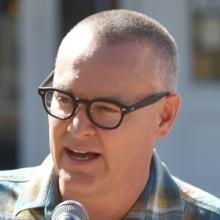 David Clark
The first change in the legislation might seem small but it is significant: EQC is to have its name changed to Toka Tu Ake — the Natural Hazards Commission, to better reflect its over-arching role in the recovery from many more disasters than simply earthquakes.

It also removes some of the more ridiculous arbitrary language in the current Act, such as its determination that a volcanic event only lasts two days.

Enshrined in the objectives of the new commission is that it is to ensure it manages and settles claims in "a fair and timely manner", something which the many homeowners who had to go to court to try to get their EQC claims settled will ardently hope actually comes to pass.

It also requires that the commission have an out-of-court dispute resolution process, something which hopefully would avoid the heartache the aforementioned dissatisfied homeowners had to go through.

The commission will continue to manage the Natural Disaster Fund, the pot of money from which it settles claims and review the insurance levy which largely funds it every five years.

The Kaikoura quake, so hot on the heels of Canterbury, raised legitimate questions whether the fund could cope if the old adage of troubles coming in threes happened to be the case, but neither can levies be so high that they prove to be a disincentive to taking out insurance.

What may well be the most contentious area to be considered by the select committee could be the cap on how much money the commission will provide to repair damage.

Currently it sits at $150,000, a number which has proven woefully inadequate to repair many quake-damaged homes, let alone houses damaged in recent flooding events such as in Southland and Tairawhiti. 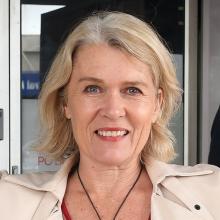 Dr Clark said that the Government had taken time to learn from the Canterbury experience to ensure that no-one needed to be traumatised again by the claims process.

"A huge amount of effort has gone into getting the technical detail right, to looking at how claims have been settled customarily, to ensure that the rules are clarified to the extent possible, to ensure that the process can be as simple as possible for those who are trying to recover in the face of a significant natural event."

Also weighing in during the debate was Taieri Labour MP Ingrid Leary, who one might have thought had parochial reasons for being interested in the Bill given major fault lines run right through her electorate.

"On 22 February, 2011, Dr Dominic Bell, father of three, 45-year-old, larger-than-life character, who happened to be my brother’s best man at his wedding, went into the CTV Building, to his surgery there, and never came out alive."

As a member of the finance and expenditure select committee, which will consider the Bill following it being voted through unanimously at first reading, Ms Leary will be wrestling with the finer details of the legislation for some months to come.

But her opening statement hit the nail on the head: while insurance may seem a bit dull, in this context it is about what is fundamentally the most important thing to people: the happiness of their home and the security of their family.

All of which makes this a very important Bill to get right.